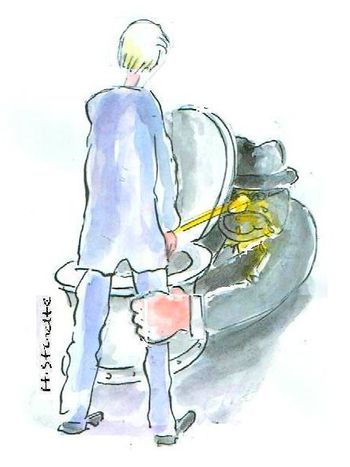 Julian Assange pisses outside the pot

The Italians have a colourful expression to describe how the Australian founder of the whistleblowing site has 'crossed the line'. Other European heads of state must be ruminating on similar lines after the avalanche of revelations which have been appearing each day on the internet site WikiLeaks. Final idiom of 2010 to mark the story of 2010

Julian Assange is no longer a fugitive. After a separate international arrest warrant was issued by Interpol due to a Swedish investigation into Assange's ‘rape and sexual assault’ of two local women, the founder of WikiLeaks turned himself into British police in London, where he stayed without bail until 14 December. The Australian activist has always denied the accusations, saying that the charges laid against him are nothing but a defamatory claim from the United States against WikiLeaks and its revelations. He confirmed to Judge Caroline Tubbs that he will fight his extradition and that he will never go back to Sweden, and is now effectively under house arrest at a friend's in Norfolk. Separately, Assange is still promising the release of new confidential dossiers, with more and more sizzling revelations.

Italian prime minister Silvio Berlusconi was described in the WikiLeaks cables as being ‘irresponsible, vain and an inefficient modern European leader’, partly due to his various indiscretions. Ancora? Il ragazzo sta davvero pisciando fuori dal vaso, he must have cried, literally accusing Assange of pissing outside of the pot. Meanwhile, in the staterooms of Paris, president Nicolas Sarkozy is faking a smile. With a glass of champagne in one hand, he is keeping an eye on the latest dispatches which speak of him as a roi nu (nude king). The cables also say that he is ‘authoritarian and touchy’. In reaction to this, Sarkozy presumably exclaims through clenched teeth You’re pushing the button a bit too far, Julian (Tu pousses le bouchon un peu trop loin, Julian), a polite way of saying that the new media guru is not pissing straight (ne pisse pas droit).

With all this French-Italian toilet talk, let's say that the German chancellor Angela Merkel is finding the quickest path to the toilet so as to not lose too much time. After all WikiLeaks has described how the Americans see her as 'uncreative' and 'not prepared to take risks'. Deeply affected she might think Er hat über die Stränge geschlagen, literally kicked over the traces, before making a phone call to England, where the former Britishprime minister Gordon Brown was WikiJudged in a similar manner: 'Yes, Angela, I know,' he would reply, 'Assange has crossed the line. We must do something.'

In Spain, none of this has pleased Jose Luis Zapatero, described by WikiLeaks as an 'opportunist' political leader, more concerned with the elections than with the well-being of his own country. Before cursing these judgements, his last words to a mythical Julian before him were probably: Te has pasado tres pueblos - literally, you have passed three villages in Spanish, which is as far as they seem to have to go to cross the line. Conversely, the Polish prime minister Donald Tusk seems, for the moment, to have escaped criticism. But were he to confront Assange for his revelations, Julian would become a racehorse who has galloped too far (Zagalopować sięulian).