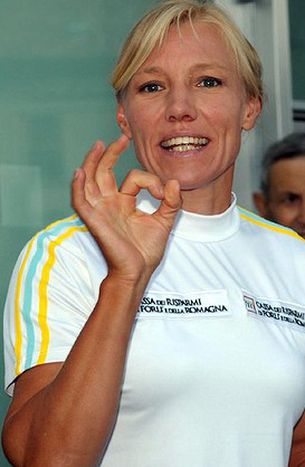 The East German-born canoer, 42, and sporty mum-of-two won for Italy at the Olympic Games in Beijing 2008, after a string of international successes in LA, Seoul, Atlanta, Sydney and Athens 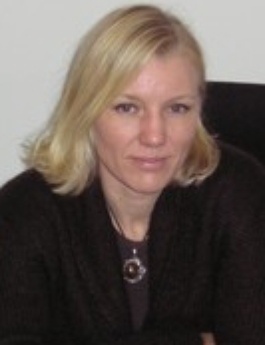 Born in Goch, east Germany, Idem faced the canoe for the first time at the age of eleven. ‘There was a strike at my sister's school, so I tried it,’ she says, of the unplanned encounter which happened by pure coincidence. ‘In the beginning, I kept falling in the water. It wasn’t simple to keep my balance, but I had fun, so I kept on at it.’

A spate of international competitions came her way and at 17 she took part in the world canoe championships. It was here where Idem met athletes from east Germany. ‘I remember that they weren’t allowed to talk to us.' she says. Face to face for the first time, the impact was both impressive and disturbing. 'Not even a ‘hello’. We didn’t exist in their eyes.’ The young people from the east were under strict surveillance. ‘But it didn’t stop them trying to meet us,’ adds Idem. ‘We met up in secret in hotel rooms, with one of us standing guard in the corridors, ready to alert us in case someone came round to check. If the people from the east were caught with us, they would have been kicked out of the competition and banned forever.’ Curiosity was obviously worth the risk.

Idem took away a fascination with how east Germany trained their teams. So much so, that after reunification in 1991, she studied all the tricks of the east. ‘Apart from the doping – which everybody was aware of - training practices were really advanced. Science was applied to the sport.’ Her clandestine friends also spoke about their dreams and the realities of leaving east Germany. ‘It was really difficult. Leaving a family was not easy. On top of that, they used to marry quite early. So they had a short time in their life where they could be independent enough to take such an important decision and move abroad forever.’

Things soon deteriorated with the German national side. Idem won two bronze medals in the 1989 world championships in Poland, but doubted the trust of the team. She moved to Italy with Gulgielmo Guerrini, a volleyball trainer she met in Prague the year before. Her future husband was from Santerno, a small town close to Ravenna, where they still live today.

Meanwhile, training in Germany was becoming ever-difficult. Guerrini didn’t speak German, there were the afore-mentioned issues with the national team and the long work trips to Germany pushed Idem into finally settling in Italy. She found people to take charge of her career, joined the canoe club in Milan and Guerrini became her personal trainer. The final element was waiting just around the corner: ‘It wasn’t long before I had the backing to compete for Italy. I was stunned! Later I found out two of the best canoeists from east Germany had managed to compete professionally for the west. They thought that was a good chance to let the bronze medallists – like me - free to go, and bring the two gold medals won by Katrin Borchert (former DDR athlete) home,’ she stresses with satisfaction. ‘But by the 1990 world championships I had come first, and Borchert was trailing third.’

It was to be the first in a long line of medals – thirty, precisely – that Idem won under the Italian stripes, in both European championships and the Olympic games. An important secret of her success lies in the training she does, which she says is ever sophisticated and personalised. ‘We started to do research, paying attention to my age. My husband plays a key role in this field.’

Childbirth to the kayak to the town hall 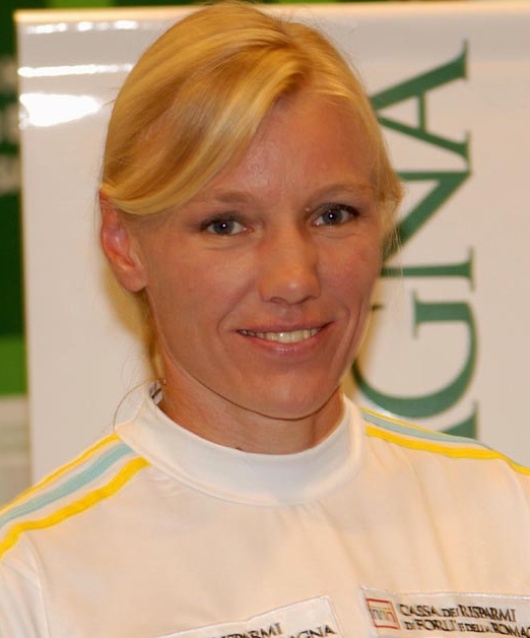 The greatest news came in 1995 when her first son Janek was born. Idem was ten weeks pregnant when she took part in the world championship in Mexico, in which she took home bronze. ‘I felt guilty because I was training again only 18 days after the birth,’ remembers Idem. ‘I was really troubled because my mother for example was always at home with us.’ But the practically Italian champion keeps her sons Janek and Jonas close, with both travelling alongside their mother when she competes. ‘Many athletes leave their children at home for the main competition, but we prefer to keep them with us.’

In 2001 Idem received an unusual proposal: to run for election for the city of Ravenna, for the centre-left coalition. ‘At the beginning, I was sure that wasn’t a choice linked to my public image.’ Finally she agreed and was promptly elected to be sports councillor. ‘At the end of 2006 I wasn’t sure if I’d be re-elected, and I’d also braked my career.’ Idem decided to jump back in her canoe - ‘the job I do best'. She promptly won a silver medal for the world championships in Hungary, and bronze for the European championships in the Czech Republic during the summer.

‘It's been an amazing year for me,' Idem finishes. 'After sixteen months with no competition, two sons, and consider my age - I'm 42! - to get such results was great.’ There's no stopping her either; in 2007 Idem quietened down her politics commitment to re-focus on sport: Peking 2008, her seventh Olympic games, awaits.

This 'brunch with' was first published on cafebabel.com in September 2007