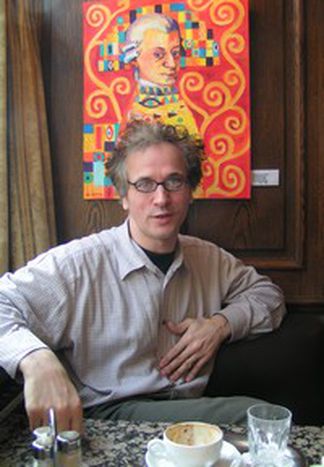 Josef Penninger – the science of the skin

Josef Penninger, Austrian biologist and celebrated researcher, gives us his recipe for exact science – a mixture of talent, audacity and financial independence.

8.30am, Café Schwarzenberg, Vienna. Josef Penninger has chosen one of the Kaffeehaus typical of the days of the Austro-Hungarian Empire, having retained their quaint, dreamy, 19th Century charm. I am not a morning person, especially not on a Monday morning, but my biologist – a little tousled and smiling widely –is enough of one for the both of us. Is this the same energy which carried him from his little Austrian village to the directorship of the prestigious Institute of Molecular Biology (IMBA) in Austria?

“It was more a series of coincidences,” he smiles. “I was planning to be a doctor in the country. I never even knew that biology was a career.”

He concluded his medical studies at the University of Innsbruck with a thesis on immunology. He then met a Canadian man at a Parisian bus stop and decided to take his chances across the Atlantic.

“After three years I wanted to go back to Europe, but they kept telling me that my field of research was of no interest to anyone.”

As a result, he stayed in Toronto for 13 years, married, and became a professor of immunology and father of three. He worked at the Institute for cancer research in Ontario and discovered, among other things, the gene responsible for arthritis and almost all degenerative ostepoathic illnesses – creating a flood of pharmaceutical applications. He has been showered with prizes and accolades –from the William E Rawls prize in 1999 –recognising his years of cancer research – to his rank as “one of the world’s ten most promising scientists” following a report in Esquire in 2002. European research institutes certainly regretted his move to Canada!

At least, until the Austrian Academy of Sciences gave him an offer he couldn’t refuse: founding his own institute, from beginning to end. He therefore attempted to create in Vienna the same atmosphere he had experienced in Canada.

“We only use first names – no stupid hierarchy or pompous titles”, he explains. There is an openness and freedom which, according to Penninger, shows everything that is missing in a European university system weighed down by an obsolete hierarchy.

“It’s the young people who innovate. It is their glory, not that of old professors,” he insists. “We must simply give our researchers intellectual and financial independence, along with, naturally, the necessary support.”

A visibly effective philosophy; barely two and a half years later, the IMBA is playing in the big leagues. One team, for example, is responsible for explaining the molecular mechanisms in eggs with diseases such as SARS and other pulmonary illnesses.

A Laboratory of European talents

Our biologist takes his media-friendly approach with good grace, and takes his role as spokesman very seriously:

“The so-called ‘general public’ is very fond of science – and good science is very easy to understand, because it is simple and straightforward. It’s like opera – if the orchestra is awful we throw tomatoes at them. Scientific communication should permit the public to boo the bad scientists.”

Politicians are Penninger’s privileged victims; he has to convince them to invest more, and more wisely, in scientific research. If Brussels reviews his proposals thoroughly, our researcher is of the opinion that science could even become one of the pillars of European integration. He also predicts subsidies which are more generous but make the distinction between public and private research. He recommends the abandoning of prioritised research fields.

“Nanotechnology, biotechnology; these definitions are laughable. We just need to invest in talented people and leave them to it; wherever they are.”

Therefore he is proposing to return the funding from the European Member States to the common budget and reallocate to the best researchers and the best projects, irrespective of where they come from.

“And if half of the money goes to the UK, because that’s where the good researchers work, then so be it!” he asserts.

A system based less on consensus, but more on competition, would allow Europe to draw openly and clearly from its researchers.

“Research is like a huge desert scattered with oases. A sound strategy is to find those people capable of finding these oases, and who can find more of them in the future. If the smaller research institutes and the big American industrial companies both race to the same oasis, who will get there faster?”

In his daily work, Penninger avoids the European machine as much as possible.

“We are always happy to cooperate with our colleagues in the EU. But coordinating a project? No thanks… It’s an administrative nightmare,” he grumbles. However, he remains a staunch European:

“What has been produced in the last few decades is astounding. As a child, I lived near the Czech border, and we never set foot in their country. Since then, the borders have fallen, we have a single currency… We’re growing together like there’s no tomorrow.”

He also recognises the benefits of European programs such as Erasmus.

“It is essential that these kids realise that their country is not the centre of the universe and that there are idiots and wisemen everywhere – whatever their language or religion”.

Elsewhere, scientific research has not acknowledged geographical borders in a long time. “Basically, we all have this altruistic sentiment about one day being able to help our neighbour. It is unlikely, but we can try,” he finishes, laughing.