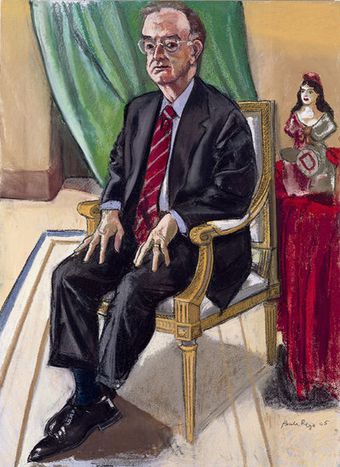 Jorge Sampaio, former President of Portugal, on the European dream, a constitution revival and feeling Portugese

‘There must be a mistake; we have no-one by that name, unless of course he’s registered under an alias.’ The receptionist eyes me dubiously as I stand in the lobby of this upscale Brussels hotel, an oasis of calm after the bustling rue Royale. Could Jorge Sampaio, 68, be an enthusiast for aliases? After a moment of anxiety, I find the former President of Portugal seated drinking a tea. I join him, perching precariously on an overstuffed chair under a sparkling chandelier.

Sampaio begins by retracing his political career, taking us back to Portugal in 1960. Head of an association of Lisbon law students opposing the dictatorship of António de Oliveira Salazar, at 21 - and ‘a bit by chance’ - he became the Secretary-General of the Federation of Student Movements. Several years spent abroad have strengthened his commitment to politics.

‘I have always felt European,’ stresses Sampaio. ‘My mother grew up in England, and my father studied medicine in the US in 1948, and later in Great Britain. Despite government censorship, I was immersed in French culture - the writings of Gaston Maspero, Pierre-Esprit Radisson, the Sartre-founded literary and political review 'French for Modern Times' (Les Temps Modernes), André Malraux and Jean-Jacques Servan Schreiber's L’Express, France's first weekly news magazine. The papers came wrapped in other publications, disguised so that the police wouldn’t confiscate them.’

Even before the Carnation Revolution of 1974 that ended Portugal's bloody dictatorship, Sampaio believes that his country had already begun to change. 'The emigration during the sixties, young women back from France on holiday going to cafés in jeans and entering a world that had been until then exclusively masculine. That was change! There were so many other worlds to discover!’

A lawyer from 1965 to 1974, Sampaio famously defended political prisoners in front of military tribunals. These were the same courts where those who refused to serve in Portugal’s African independence wars (in Angola and Mozambique were ‘condemned in advance.’ When Salazar’s dictatorship collapsed in 1974, the European dream was the obvious solution. The country's economy had been bled dry by colonial wars and mass emigration to France and Germany.

A member of the Socialist Party from 1978, Sampaio became first a member of parliament, and then the popular mayor of Lisbon in 1989. In his 1996 to 2006 presidency, the former lawyer weathered a period of political instability, despite never being able to rely on an absolute majority in parliament. According to him, ‘Portugal owes much to Europe, but it has also contributed enormously. The Portuguese can be found nearly everywhere, and perfectly integrated at that, as far as India.’

‘If I like to say that I am a humble militant for Europe...’ My interviewee pauses theatrically before continuing, ‘as time passes, I feel more and more Portuguese.’ His tone suddenly becomes more presidential as he emphasises that the 'European agenda cannot function without a domestic agenda, since the responsibility for implementing communal policy belongs to the individual member states.’

Sampaio is an attentive observer of the European Commission's work, led by countryman and former Prime Minister José Manuel Durão Barroso. The Commission has not been spared from crises, including a growing lack of confidence from its citizens, successive enlargements, and the Turkey problem. ‘We need progress and innovation. We need to believe in the future, because we are faced with a political crisis in Europe.’ With this Sampaio becomes more animated; his hands rhythmically rap the table in time with his words. ‘Even so, Europe is the only path; we haven’t shown that clearly enough.’ He has forgotten his tea, and I have let my coffee grow cold.

To the former President, who has just returned from a tour in India, Europe lacks confidence in itself despite being an object of admiration on the world stage. The rejection of the constitution by the French and Dutch peoples is often understood as a consequence of the enlargement of 2004. ‘We could perhaps have been more prudent, but it was impossible from a historical point of view not to allow all the new members from the former Soviet Bloc to enter at the same time.’

According to Sampaio, the European constitutional treaty must provide above all a consensual basis for moving forward. The mini-treaty could be a way out, even if it is more likely that closer cooperation will grow naturally in key areas. Progress has to be made even if the members of Europe’s implicit board of directors – France, Germany, and Great Britain – are divided amongst themselves, as they were when the common currency was introduced.

Concerning Turkey, and the decision of the European Council to suspend talks on eight of thirty-five chapters of the membership agreement, Jorge Sampaio admits that the situation is ‘saddening.’ Ankara’s membership is promising strategically, demographically, and economically. ‘We may think that Turkey will do anything to enter the EU, but for the Turkish government, the Cypriot question remains one of nationalism.’

Europe is therefore in a transitional phase. But for Sampaio, there can be no question of stopping. 'We have to continue and prepare for the future, be exact, and re-equip Europeans to confront new challenges.’ Security, health or environment stakes are high, and there is a risk of nationalist clashes in the search for common solutions. Sampaio emphasises that it is time for politicians to concentrate on ‘education and activism.’

With his current two-year mandate as the UN’s Special Envoy to Stop Tuberculosis, whilst playing an active role in the battle against AIDS, the former President is seldom in one place for long. ‘Europe is out of step,’ he says, comparing it to India, where neither the length of the working day nor entrepreneurial spirit are limited.

‘I believe in the European model, in our values, and in our rich and varied cultures. Europe is a shining example of diversity under a common umbrella.’