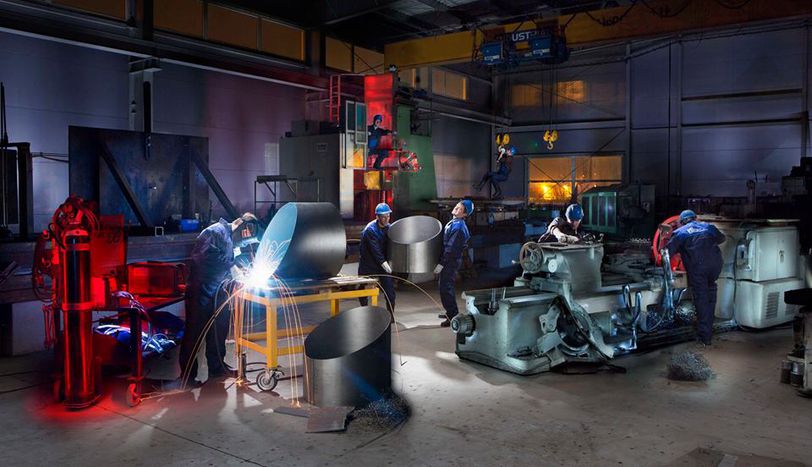 Jobs for Europe. Not so easy to photograph work.

The winners and all about the Jobs for Europe - Europe for Jobs photography competition.

Gediminas Tamulynas is the winner of the Jury's First Prize in the Seventh Jobs for Europe – Europe for Jobs photography competition, sponsored by the Party of European Socialists (PES) Group's Brussels Regions Committee.

The latest fashion for organisations, institutions and companies to hold photography competitions has invaded the web and seems to have become the great panacea for organisations incapable of communicating except by reports, essays or books. Trying to reach out through more contemporary means of communications, these competitions are being used to obtain contacts and like's on otherwise moribund pages that have been ignored by internet users. All too often, they are becoming a shortcut way to obtain images that otherwise would have to be well-paid for. Wanting to remain optimistic, the PES initiative has the merit of involving more than 400 people, while the photos selected to appear on Facebook numbered 198.

Though for a competition opened to all, without distinguishing between professionals, photographic amateurs, or simply camera lovers, the average quality of the photos published on the Facebook page seems high. A large part of the participants come from Southern European Member States (Italy, Portugal, Greece) and Eastern Europe (Romania, Bulgaria, Lithuania). The other two winners beside Gedeminas Tamulynas were Latvian Liene Purple in second place and Belgian of Tunisian origin Ismail Mejri, who came in third on the podium.

The winning photo was taken in a steel factory. "I was there to make a film and I was shooting in the daytime," Gedeminas Tamulynas tells me. "It occurred to me that if I filmed in the evening, we could get other effects. So when it got dark I set up the lights, coordinated the workers and shot the photo." In the image one can readily sense a fine knowledge of the technique of artificial lighting, a captivating usage of color, and an expert distribution of figures within the frame. It's not a documentary or journalistic photo but a reconstruction of a real environment.

It certainly deserved to be among the top three winners. Stephanie Bliard, curator of the Museum of Photography of Charleroi and jury member, explained to me the reasons why photography is more often chosen as an interactive and participatory medium. "Photography is easy," she state. "It's easy for people to shoot photos by day today and it's easy to organize a photo competition, and upload it to facebook. With painting, for example, that would be more difficult."

If on a practical level, the basic work flow is without a doubt one of extreme accessibility (I push a button, review the image, and upload it to a social network with another push), I'm thinking of the photographer's work, often involving months and years of training, to make and create stories, and distribute them. To find in one's files, small or large, the one photo that perfectly represents a competition's theme. Certainly, this is a competition open to all, professional or not, but the fortuitous harmony of the shot by an amateur who is passionate about the image, instinctively understanding the right moment, ability to create the composition: is all of that as easy as they'd like you to believe? 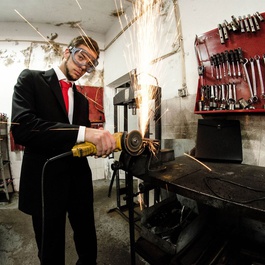 In the gallery were also many manual labourers (craftsmen, machinists, farmers, fishermen) and street workers (such as street artists), while more contemporary work was rare, especially that focusing on staffs. If there is more of a fascination with the old masters, there's also the problem of accessibility to certain workplaces, often forbidden to non-professional photographers. There is a lack of images of today's young precarious workers, focusing more on masters of more manual rather than intellectual and creative work. The only shot that seems to mix (literally) the two worlds was the ironic one by Henrique Luís, in which a young person in typical office attire is working with tools in a machine shop. Will that be our fate?

I ask Stephanie if in choosing the photographs, the young people were asked about their difficulties (as they did with the photographers) in breaking into and surviving in the contemporary labour market. It seems not. "We chose positive photos, that will send positive messages." In the name of optimism, images that portrayed problems of employment, fatigue, and doubt were excluded. 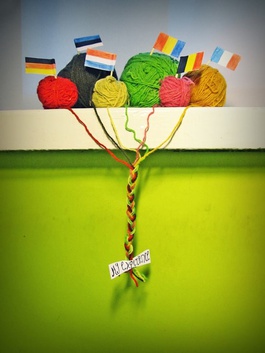 Liene Purple's shot was the perfect one to respond to this demand for optimism. Her soft, colourful and reassuring balls of wool were printed on thousands of PES cards. "Her name printed on the other side", according to Stephanie Bliard, "will help her get contracts and make contacts." Together with the prizes, another happy reward from the competition. 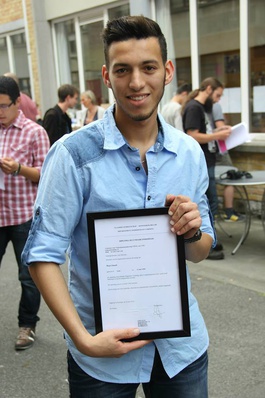 On the other hand, the award of third prize to Ismail Mejri was a surprise. The photo shows the young graduate displaying the diploma in computer sciences he's just obtained. Didactically framed, it appears to be genuinely random. But it is neither a selfie nor a self-portrait. Evidently one of Ismail's friend or a family member took the photo. When I point this out to Ismail, he tells me that yes, this is a picture of himself and talks of his surprise at being a prizewinner. Ismail seems to me to have acted in good faith, maybe not even realising the difference between being the author of a shot or its subject and having the rights to it when he sent it into the competition.

I ask Stephanie Bliard for clarification. "We didn't realise it today, when awarding the prizes, but," she restates, "what counts is the message, the positive content that is added to this type of competition." That's the message. Why give a prize to an anonymous photo in which you simply see a young European of foreign origin with a diploma in his hands? Why give it to a young person who didn't even take the picture? If the intent is to combat negative prejudices, I'm not really convinced that's the right way. A simple and direct photo could be marvelous, but its linear form is often the result of long study or at least a "trained" eye. The committee's constraints (though delineated in a positive sense) produce these and other paradoxes. Whoever makes the policy seems to often choose modes of expression and sharing without fully understanding them, according to the fashions of the times, which can backfire without it being even realised. In the scope of an interesting initiative, there is still the minus of awarding a prize to an insignificant photo shot by nobody knows who. Also if it doesn't seem to interest anyone else. 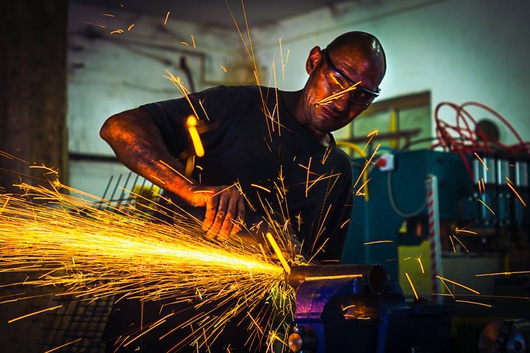 Maybe it's not just a coincidence that the only image that renders the idea of the effort involved in work was that of the winner of the public's and special merit award, Bulgarian Alexander Goranov. Again set in a steel factory, depicting a worker front and centre, it has today garnered 1,536 likes and 156 shares. For once,  the usually superficial but democratic like has chosen a deserving winner.