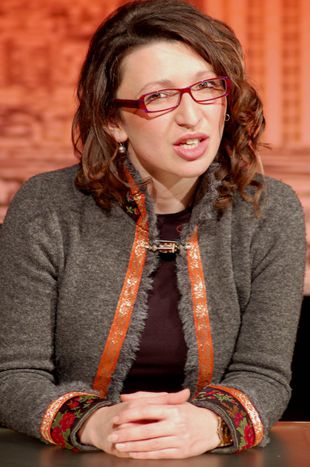 Jeta Xharra: ‘Kosovo's status is not a solution to everything’

BrunchSocietyBalkan eye in the sky

Playwright, journalist and Kosovo's answer to Jeremy Paxman - the ‘pushy, irritating’ TV presenter as she describes herself, 29, exposes local politicians in a society she vouches is 'fed-up'

A group of grannies from Mitrovica are flapping around a bridal shower in the dimly lit AA restaurant galley. Jeta Xharra raises her voice above the hubbub and exclamations at the heavy rain beating on Prishtina’s ditchy streets below. ‘Stop someone on the street, and they would never recognise me as a playwright,’ the 29-year-old begins, ‘but a very pushy TV presenter who just unmasks the current media for what they are.’

Xharra was always the activist. As an eighteen-year old BBC interpreter she would sneak home with muddy shoes after 'fixing for money' with her brother during the war in 1998-9. She recalls an ‘alice in wonderland’ world of refugees and burning houses in Kosovo. ‘How can you sit in class, learn to be a playwright and practice art when this is happening ten kilometres outside Prishtina?’ Her home city preserved its shell as a café society in segregation. When her parents were fired from their jobs as legal advisers because they were Albanian, she describes ‘the biggest, simplest, most banal shock was Milosevic making my mother a housewife.’ 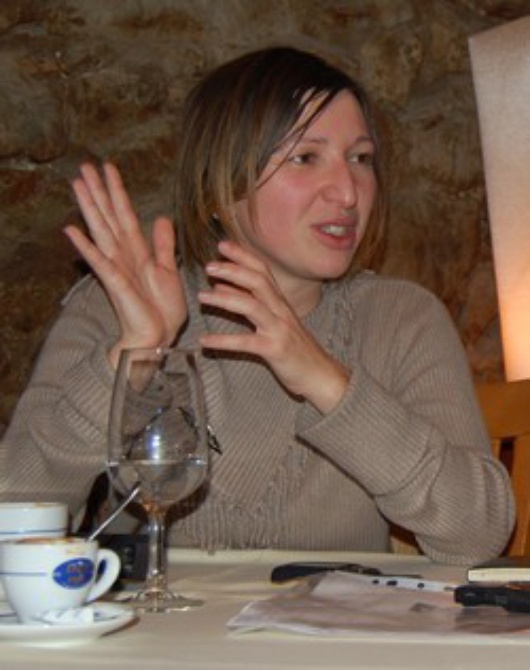 Over a large macchiato, Xharra explains a sort of 'brain re-drain' so characteristic of the Kosovars who returned from exile. After the war, she financed two masters degrees in war studies and then screenwriting, and wrote her first play ‘Warless’ (2004), by working for the corporation’s world service in London. ‘Work ten years for promotion in a factory which can work without you - or make big steps in a small place.’ She took one big step in 2005, becoming country director of the ‘newest state in Europe’ at the Balkan Investigative Reporting Network (BIRN), a media training and development charity specialising on investigative reporting. ‘We need to move with the speed of light to reach development where we need to be,' she emphasises, 'through something more mainstream.’

Cue Xharra’s current affairs programme Jeta në Kosovë, in its second year of broadcast on channel RTK. The show’s title puns on the meaning of her name: ‘Life in Kosovo', she says, listing its towns without sewerage, un-built roads, huge unemployment and a lack of electricity in the streets 'because all the street lights are broken.' The inspiration behind the show? ‘London. It instilled the culture of journalism in me. I miss newspapers, debates. I model my programme on the culture of Newsnight. Paxman is my role model – even if he is annoying!’ Her vigilant, pushy personality caught the fever, to general surprise; nightly televised election debates accomodate in-house audiences of 900 people, up nine-fold from the show's debut.

'If politicians don’t keep their promises, we will play them back this tape and embarrass them big time'

Footage of votes being stolen during the 17 November elections. Xharra brandishing unpaid 3 – 5,000 euro electricity bills under the noses of her red-faced politician guests. ‘We’ve had three elections, but somehow these feel like the first real ones,' she judges. 'Parties base their words around I’m gonna bring independence. It’s clear now they’re not running on independence but electricity. And if you don’t keep your promise, we will play you back this tape and embarrass you big time.’

Rule of law before Serbia and status

Xharra is frank about being an ‘irritating’ presenter in a society unused to seeing a young female challenger interrupting her elder, ‘respectable’ guests - and who sometimes mixes up some identical names! ‘I wouldn’t be able to do it if I was a man. I would have got a kick in my ass a long time ago. I use the fact that I am a woman to my advantage - they don’t know how to look a woman in the eyes. But I had to come out looking older in the beginning.’ The make-up-free Xharra who sits opposite me may have challenged patriarchal convention by basing the show on a part of her personality, but she’s not resting her laurels on the successful format. She's currently on a 'talent’ search for new presenters ‘to be nicer than I am for a change.’

Even women have a pop at the producer-presenter for a policy of inviting mainly male guests. ‘My priority has to be who’s in charge,’ she says. ‘We are still used to the communist way of ruling rather than democratically answering to the people who give you the votes. If politicians can get away with not paying their bills it’s because the state was always the enemy. Always ‘someone else’ except ‘us’, the people. 90% of Albanians never had a state,’ she muses.

Comments like these turn Xharra into a voodoo doll - how does she deal with the pricks of ‘anti-independence’ pins? ‘Nothing has made me go off air. People tried, and I had to force others to back me up.’ Take blog comments to a review she wrote of Kosovo’s first film feature premiere in October 2005, in which she praised the onscreen ugly truths of a post-war Kosovo: 'an overdramatiser, always prone to anti-Albanian and anti-Kosovo comments and writing.’ She disagrees.

'We’re not better off under Serbia. They kind of killed us, but we also have bills to pay'

‘I am being the most pro-independent I could be because I am pushing to make a state. Status is not a solution to everything. It’s a two-way road; we need to get our acts together in so many ways.’ She speaks faster, remembering her granddad, who died aged 97 a year ago. Recruited as a teacher from Albania in the forties, he opened a night school in Kosovo, all the while lobbying villagers to send their girls to school. ’Our leaders pledge to improve education saying we’ll figure it out when Kosovo has a political status. But after eight years a post-conflict society will not buy a nationalist game.’

The consensus prevails that these views serve anti-independence camps or Serb arguments. ‘Of course being under Serbia is not an option because we’re not better off under Serbia. They kind of killed us, but we also have bills to pay.’ Critical debate has entered the mainstream in Kosovo.