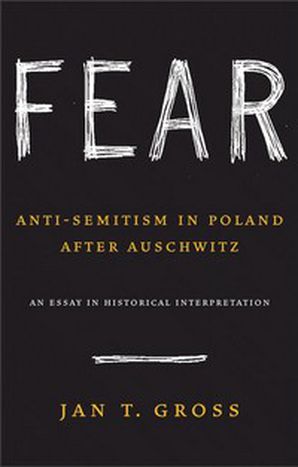 The latest work by Jan T. Gross, an American professor of Polish origin, has ignited a fierce debate between the Polish church, historians and media. Fear: Anti-Semitism in Poland After Auschwitz: An Essay in Historical Interpretation was published in the US in 2006 under the title Fear: Antisemitism in Poland after Auschwitz. In it, Gross blames the whole of Polish society of having an anti-semitic attitude, shown by the acts of violence against Jews purportrated before the end and after the end of World War Two, and notably the Kielce pogrom, when 37 Polish Jews were murdered in 1946.

According to Gross, Polish anti-semitism stems from the fear of the Polish people of giving back properties to the Holocaust survivors, as well as the feeling of guilt for their actions during the War. Gross also points the finger at the reproaches of the Polish church. He challenges the theory that the origins of post-war anti-semitism is the unproportionally high number of Jews in high positions in the communist regime.

The book comes seven years after the publication of Gross' controversial documentNeighbours. The Destruction of the Jewish Community in Jedwabne, Poland. It discusses the 1941 massacre of several hundred Jews by half of the village residents of Jedwabne in Poland. Today, the name of the book itself goes unmentioned on Polish front pages.

The main reproach of the historians in the media against Gross is that he has not used his historical research properly. They blame him of using academic polemic and 'the careless use of comparing the numbers and facts'. They say he only used the parts of witnesses’ statements to back up the main arguments of his book. Janusz Kurtyka, director of the Institute of National Remembrance (IPN) where the acts of the Polish Stasi are documented, has criticised Gross by calling him a 'vampire of historical writing'. Kurtyka maintains that his book does not have much to do with academic research.

'An academic should carry out his research with passion but not as if he is on a mission,' professor Andrzej Paczkowski told the author and columnist Halina Bortnowska during a televised debate on TVN 24 (Poland's first 24-hour news channel) on 19 January. 'And Gross is acting like a missionary.' The respected historian added that: 'Here there are two types of memories- that of the Polish and that of the Jews. Memories is one thing, history is another. Memories are either black or white, but history has many different nuances – these are the shades of twilight.'

Commentators point out that the book simplifies the Polish-Jewish post-war relationship, in particularly the extent of the political conflict and the number of Jews in the political structure of the communists. Judicial circles accuse Gross of a generalisation of injustice. The Crown Prosecution Service in Krakow has investigated the facts of the case for defamation against the population. The Arch-Bishop of Krakow, Cardinal Stanislaw Dziwisz, wrote a letter to the independent publishing house ZNAK claiming that the book had 'awoken anti-Polish and anti-semitic demons.' ZNAK themselves say they are 'generally credited for. publishing quality works in fiction and non-fiction.' Meanwhile, the editor-in-chief of the right-wing daily newspaper Rzeczpospolita has described the publication as 'anti-Polish'.

The huge reaction stirred up by Gross’s book shows how great the controversy surrounding the subject of anti-semitism has become. With all it’s deficiencies, the book has the chance of bringing the Jewish-Polish debate back to life. This goal is easily achievable.