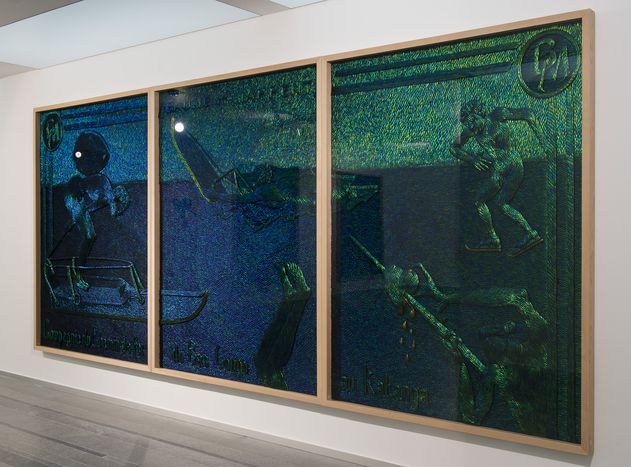 It is not uncommon that a contemporary art exhibition would meaningfully relate to its context. However, this exhibition is characterized with rare poignancy with respect to the changes that occurred in the country and the city where the works of Jan Fabre are presented. The spatious galleries where striking reliefs by this artist are installed connect not only two cycles of works - "The Tribute to Hieronymus Bosch in Congo (2011-2013)" and "The Tribute Tribute to Belgian Congo (2010-2013)", but also art history and colonial margins to each other. 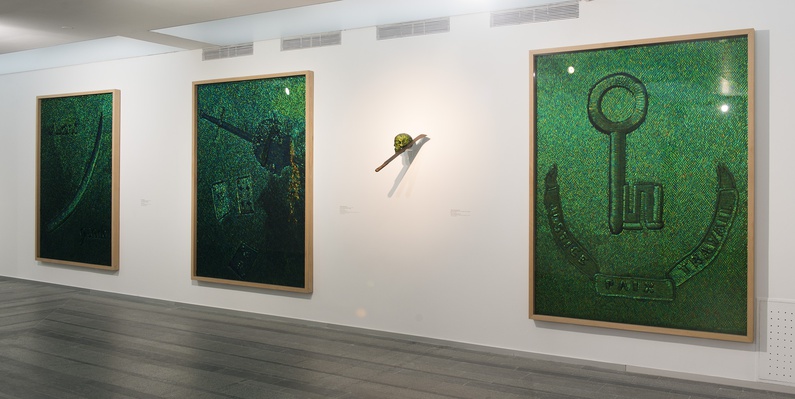 As an artist originating in Belgium, a former colonial empire, Jan Fabre deals closely with violence, exploitation and horrors that individuals in the colonized areas of Africa were exposed to. However, to do so, he makes use of an unusual medium: beetle wings. This direct permutation of natural materials into cultural expression, however, does not involve a rapatious exploitatiomn of nature, but is an act of  the artistic recovery of organic waste for the disinterested purposes of cultural critique. These emerald-green, iridescent beetlewings are collected from countries in South-East Asia, where the breeding of jewel beetles contributes both to the local diet and to local craft techniques with ancient roots.

The works on the exhibition transport the language of cultural expression characteristic of traditional societies into the parlance of contemporary art, as Jan Fabre reflects on the cultural geographies of European colonialism by weaving the cultural practices from global margins into the thick fabric of cultural references borrowed from the European history of art. In doing so, the artist also manages to make a double statement with respect both to the violence that accompanied Belgian colonial pursuits in Congo, Africa, and to the turmoil that the host country of this exhibition went through. Historically situated at the margins of Russian, Habsburg and Ottoman empires, Ukraine is a vantage point from which the colonization campaigns that went hand-in-hand with imperial expansions can be conemplated as events whose cultural implications only begin to be explored. 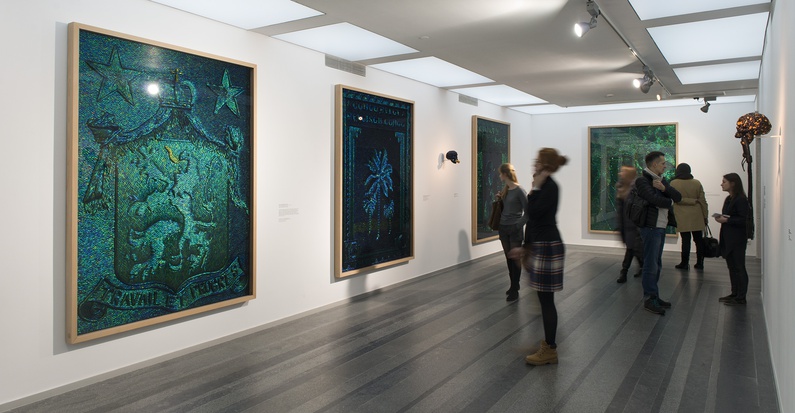 In this respect, Jan Fabre's allegorical treatment of the atrocities that Belgian colonial regime has perpetrated in Congo relates the suffering of the colonized Africans to the escatological narrative of the Last Judgement and the pictures of heaven and hell that Hierobymus Bosch produced at the eve of the expansion that European empires have embarked upon circa 1500.  The allegorical import of this exhibition loses none of its relevance also in respect to Ukraine, where conflicting territorial claims, struggles over natural resources and popular resistance and violent acts harken back to pre-modern historical periods when imperial interests held sway over disempowered individuals.