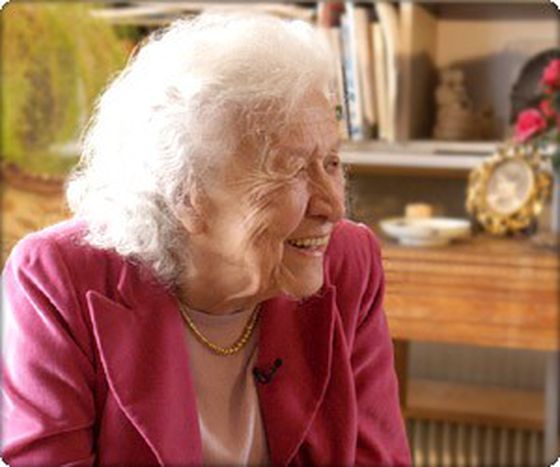 Jacqueline de Romilly and the timelessness of Greece

by Joanna Papadimitropoulou Sick and essentially blind, Jacqueline de Romilly still managed to be informed, thanks to her students, on what was going on in her beloved Greece due to the financial crisis.

By some tragic coincidence, the demise of this passionate woman with those wonderful blue eyes and snow-white hair makes the international horizon even bleaker at a time that Greece lives her own drama with intense.   This is the first thing that comes to mind, as you hear the news.

As she writes in her book “Petites lecons sur le grec ancient” (Small lessons in ancient Greek): “No matter what -if we stay at the exceptional course that takes us from the 15th century to the 21st- one thing is certain: the force that brought Greek into prominence amidst so many crises and rebirths is mind-boggling”.     Those thoughts that the great French historian, Philhellene and academic wrote in 2008, were meant as a contribution to the debate about the survival of the Greek-language teaching at the time of the digital revolution and the internet.   Adding to that debate, the writer and translator of Greek classics, says that what happened with the Greek language was unique and it happened right after the fall of Constantinople, with the massive immigration of Greeks to Europe and the revival of Greek in Florence and in Holland through Erasmus.   “A constant flow of Greek innovations allows the language to be renewed again and again expressing new poetic and philosophical discoveries”.   J She was just 15 years old when her mother, writer Jeanne Malvoisin, gave her a copy of Thucydides' Peloponnesian War. That random event was the starting point of the rest of her life.   Recently “Oceanida” publications, published her book “Human grandeur in the Pericles century” in Greek, a few months after it was published in France.   In her swan-song publication, Romilly explains once more the timelessness of Greek classical thought.   In these dark times for European politics, she founds the analytical categories with which “Thucydides explains the imperialist ambitions of ancient Athens in a way that makes them a basis for interpreting the great wars of the 20th and 21st century”.     That is the Achilles' heel of the descendants of Pericles. Inside the grandeur of ancient Athens, we witness for the first time the kind of unethical relationships between politicians and citizens, that remain a problem for politics worldwide until this very day.

As “Madam Grece” (a name given to her by the Nouvelle Observateur) would herself say, with the financial crisis we expect to see a replay of what happened with the Greek-language crisis: “At the point where everything ends, everything starts again.” acqueline de Romilly was certain of the momentum of Greekness, despite her pessimism about the status of studies of ancient languages and humanities. “In politics”, Romilly says, “transparency without the aid of a strong morality, without a moral integrity that drives political choices, is not enough”.