Jackass: coming of age in film the Serbian way

Tilva Roš (Image: © Tilva Roš official facebook page) There’ll be less romantic flicks and Balkan war movies in Serbia thanks to a handful of young directors who are revolutionising the Belgrade film scene with unexpected hits such as Tilva Roš and Clip

The scandal which landed Serbian cinema on the front pages of newspapers at the beginning of the year, provided

the perfect scenario: some nationalist politicians and conspiracy theories to set more fire to the powder and a Hollywood star being charged. These passions were unleashed in the Angelina Jolie film In the Land of Blood and Honey (2011), a love story set in the backdrop of the Bosnian war, where Serbs did not fare so well. ‘The nationalists want to ban Jolie’s film’, read one of the headlines of Süddeutsche Zeitung, a large German national newspaper, while British daily The Guardian wrote: ‘Angelina Jolie received threats after the premiere’.

What image can be darker than what is portrayed in the European media on freedom of opinion and artistic expression in Serbia? Since those that were calling out for a ban on Jolie’s film were just a few extremists, in a matter of a few weeks everybody had lost interest and there were no further problems. The image given off to the world was that Serbia is not open to being criticised. The new Serbian cinema, however, does away with this cliché. The flourishing film scene specifically seeks to address the issues casting a critical eye on Serbian society. Young directors are not interested in the image that these films on sex and violence will bring to their country. In Serbia, this is the sign of a certain artistic freedom. 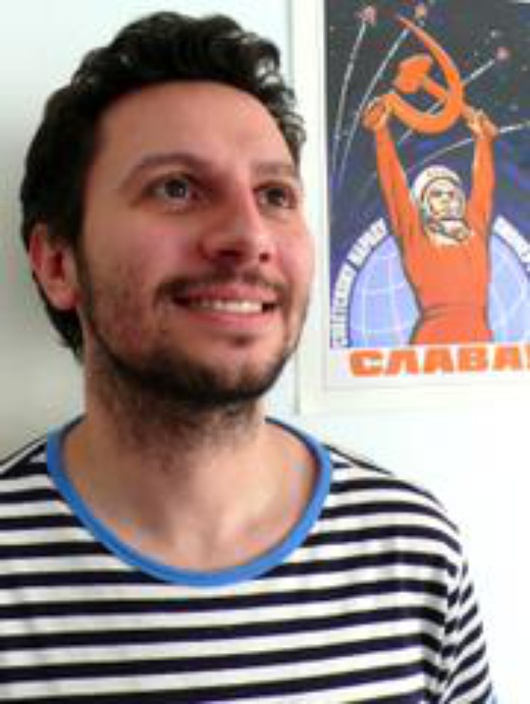 Uroš Tomić |‘When you think of Switzerland, you immediately think of banks and chocolate,’ begins Uros Tomić, 31, a Belgrade-based director and producer. ‘When you think of Serbia, you think of war, sports and cinema. Making movies is something that we are really good at.’ Last winter, Uros produced his first film, Tilva Roš, directed by Serbian filmaker Nikola Ležaić and described in the film industry as a game-changer in the field. As a Serbian teen parody of the American series Jackass, the protagonists perform stunts to test their physical and mental limits. After the preview and a distinction at the prestigious international film festival of Locarno, the team received nine other gongs and a nomination at the 2012 European film awards.

Five years previously, Uroš Tomić and two of his colleagues founded a film company of directors, Kiselo Dete (‘the grumpy child’). Tilva Roš’s success encouraged many young filmmakers to venture out and create their own production companies. This new variety of projects and enterprises is also a reaction to post-war years, during which almost all movies were produced by only five or six production companies

According to documentary filmmaker Mila Turajlic, young people in her field have experienced war and have not yet put their minds at rest. Rather than lock themselves in a rigid wait-and-see attitude, they have found ways to express themselves. ‘These films are trying to stimulate a public discourse that is so far lacking in Serbia.’ Mila sits between unused tripods from a television studio on the 22nd floor, which has a view of the city. From this height, the military building with its visible traces of shelling, is the only sign that a war passed through here. After the end of the war, there was no more financing from abroad for filmmakers, and Serbia suffered sanctions. The 33-year-old knows that the film industry is still a tough business. ‘Every film produced in Serbia is a guerrilla battle,’ she says. ‘There is no financing structure like there is inFrance or in Germany. If you want to make a movie, you have to try everything imaginable.’ Her film Cinema Komunisto (2010) discusses the rise and fall of the Yugoslav film industry. This was the first documentary that was shown in Serbian movie theatres.’

Despite its considerable success, the Serbian film industry is still suffering from a serious lack of money. Even low-budget productions experience delays of several months or years. Milan Stojanovic is currently producing the film Barbarians about youth and violent football fanaticism. In March 2012, filming was interrupted due to the freezing of funds implemented during the Serbian elections. A new law should finally change this 20-year-long film crisis. The availability of grants should increase fivefold in one go - and facilitate the leap into the top Europan cinema league. But many remain sceptical. ‘Like many laws in Serbia, it is well written and expected to be a great help to the filmmakers,’ says Maja Miloš, ‘but we must now wait and see when and how it will be put into practice.’

Maja Miloš, 29, has been kept busy for months with her first feature film, Clip. Speaking in a deep voice with bright red lips, she talks of her unexpected success. Clip immediately scooped two awards at the prestigious Rotterdam film festival. The film deals with teenagers filming their own heavy drinking and sexual activity. Despite the violence and scenes with pornographic connotations, it is a film about love and it is about Serbia, Maja says - and she wants it to stop there: ‘In western Europe, to film Clip as I did, so radically, would have been impossible or at least very difficult. In Serbia, it was clear that I had almost no budget. I did, however, have my freedom.’

Moreover, the younger generation barely needed to worry about censorship with their films that criticise Serbian society. Whilst provocative debut films always receive money from the government, they couldn’t attack the government too openly. ‘If we want to make a film about the Serbian prime minister’s assassination (Zoran Djindjic - ed) committed ten years ago, it becomes very, very difficult!’ says Mila.

All of these young filmakers are optimistic about the future. In a decade, everyone will know the five or six big names who today are only beginning to make films. It is not too clear yet, in Belgrade, what changes membership to the European union could bring. ‘Who knows whether the EU will still be around when we join,’ smiles Uroš Tomić.