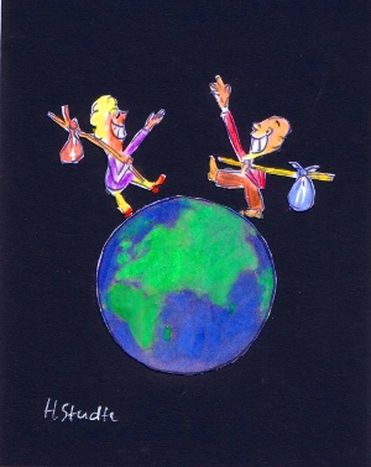 Last summer, at the foot of the Great Wall of China, I bumped into my Spanish baker. "El mundo es un pañuelo!" (the world is a handkerchief) she exclaimed, once our initial surprise had subsided. Alternative European expressions one might use on such an occasion are numerous. If your baker is German and you happen to meet her unexpectedly in between two dunes in the Sahara, she might say to you that "Die welt ist ein Dorf" (the world is a village), with a melancholy thought for her native Bavaria. However, a Slovak in a similar situation would compare the universe to a button (suit je gombieka), a tiny object if ever there was one. Elsewhere in Europe, from Italy (il mondo e’proprio piccolo) to Norway (verden er liten), bakers agree that it’s a small world. For once, on this point even the French (Le monde est petit) and British bakers put their differences to one side.