The Italian Ministry of Health seems to think that rushing young people into having kids is a good way of combatting population decline. However, the issue for young people is not the act of conception, but the ability to raise their children - which is where the support from the state seems to dry up. [OPINION]

We shouldn't be too critical of our dear Italian Health Minister, Beatrice Lorenzin. In fact, it wasn't even her idea. She wasn't the one behind the upcoming advertising campaign, organised for 22 September. This becomes clear when you do a quick experiment. If you read out the different campaign slogans in a nostalgic voice that's lilting and a touch nasal, it will give you flashbacks to 1930's newsclips from the fascist-era Luce Institute, when Mussolini harvested wheat with his bare hands alongside Italian women ("The mothers of the Patria"), drained the Pontine Marshes and made trains run on time. Newspapers at the time used the slogan "Il Numero è Potenza" ("strength in numbers"). Decades later, the Ministry of Health still seems attached to this repressive desire to increase the Italian population to make it strong again, in order to finally be taken seriously on the world stage, without feeling compelled to hand out gelato and ties. "When we had the Luce Institute, children were born on time..."

"Young fertile women, your biological clock is ticking relentlessly. Your country needs you!", to more or less paraphrase the advertising banners promoted by the Ministry of Health for the now infamous "Giorno della fertilità", rebranded as #FertilityDay. Presumably they translated it into English to give it a cool and creative edge, because there's nothing cooler or more edgy than being fertile. On closer inspection, however, it looks more like a modern remake of campaigns created 80 years earlier for Giornata della Madre e del Fanciullo ("the Day of the Mother and Child"), during which the progenitors of empire were celebrated with uproarious applause and encouraged to continue bringing children into the world. The problem is that times have changed. We have to wonder whether our dear Health Minister and her entourage in Rome have noticed.

One thing is certain: the campaign is a sterile failure, a prematurely aborted initiative that never went to full term (the campaign's website has already been shut down) and has only served to generate anger and irony. The latter is largely due to these do-gooders showing a total disregard for the value of life and for people's individuality and different life choices. This campaign has also demonstrated that those in charge of improving people's day-to-day lives are completely out of touch with them. 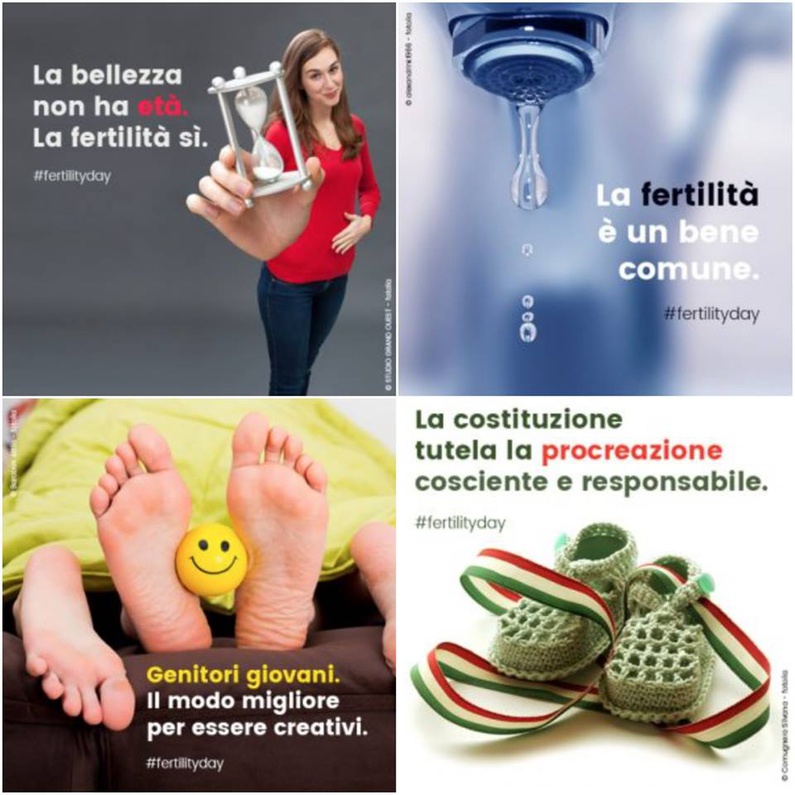 The campaign has an answer for everything. You don't want to have children as it's not the right time? You don't ever want to have children? Shame on you, women (while it could be a mere coincidence, but the adverts are almost uniquely addressed at women) - the fatherland comes before your looks! Young women and girls of childbearing age who can replenish the ranks of our proud tricolour nation: what does it matter if you cannot afford it, you are in poverty or you will most certainly lose your job when you ask for maternity leave? Procreate and give a job to those who are already out of work and leeching off the state. I'm sure elderly grandparents will be more than happy to step up and face the shortcomings of the Italian welfare system and services for the sake of motherhood.

We're sorry if the adverts border on the ridiculous: mothers caressing their round bellies with an hourglass in hand, dripping faucets (a nod to the referendum in June 2011 that included a question about the privatization of water, a reference to the "common good") and a young couple in the midst of a moment of passion, with a bizarre smiling emoticon between their feet (maybe it boosts fertility?). The continuation of the Italian race must be assured by all means necessary, including the use of baby shoes emblazoned with the tricolour flag.

Of course, we can laugh and joke about the intrusiveness of the messages conveyed by the ad campaign. We can even believe in the alleged "good intentions" of  Lorenzin, who claimed that her message was misconstrued. However, doubts arise when leafing through the "National Plan on Fertility", published by the Ministry of Health. Simply by reading the name, we are transported back in time to the era when Mussolini created the National Office for Women and Children (established in 1925 to boost dwindling birth rates, much to the applause of fascists and corporations). The humorous side to this story evaporates as soon as you open the aforementioned plan: it expresses confusion at the "dangerous" tendency of women "to put off having children until later in life due to personal ambition" (p.20).

How can we respond to the rhetorical question: "what should society do when it has forced women out of the home, opened them up to the world of work and pushed them into male roles, at the expense of their dreams of motherhood?" Let's try to answer this question: we should ensure that parenthood is a free choice and a viable option. We need to move away from a culture of enforced reproduction that is strictly biological and heterosexual - with Italian men sporting moustaches and women in skirts (long live gender stereotypes!) - and one that requires women to deny their ambitions for the "good of the family" and men to take any old job to support a family unit imposed by society, even though it may just not have been the right time for them.

The responsible choice is not simply to conceive and give birth to children, but rather to educate and raise them. Minister Lorenzin, please bear that in mind.