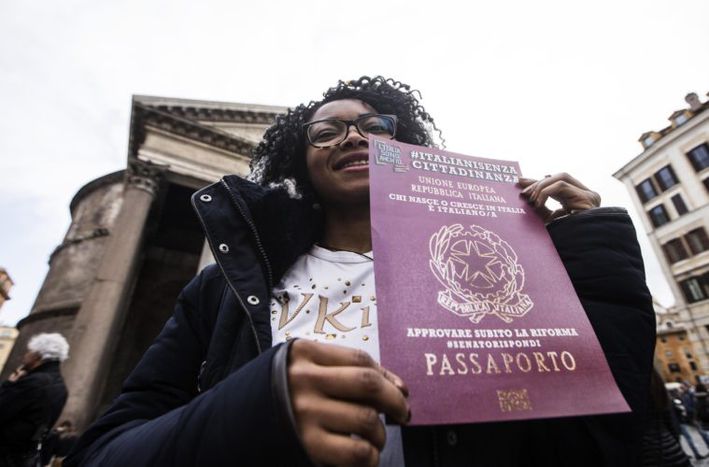 The reform of Italy's citizenship laws has cause hunger strikes, anti-racism protests and huge debates across the country. Today, one million people born on Italian soil fail to be recognised as Italian. For two years, they have been waiting for a law blocked in the Senate, and their struggle to be recognised as an italiano vero is all too real.

After being bombarded by the press and across television channels, the Italian government finally addressed the issue of reforming Italy's citizenship laws. The result was jus soli (a.k.a. birthright citizenship). However, masking over current legislative controversies with this new label means nothing. This new legislation would by no means grant those born on Italian soil the right to citizenship (as is the case in the USA). Instead, the government introduced the term ius soli temperato. This regulation underlines a temporary status, placing a series of incredibly detailed limitations and conditions on the right to obtaining Italian citizenship. This way, Italy won't risk becoming "the breeding ground for Africans and terrorists," as was described by certain national tabloid newspapers.

"Italy is a mother that doesn't want us as children"

The immediate and most significant effect this new law will have – if it does indeed get approved – is that it will improve the lives of around one million people (a number estimated by the Italian statistical body Istat). These people's legal status as Italian residents will no longer be a topic of debate, but instead become a reality. The issue around so-called second generation Italians (those who are born or grow up in Italy) is that whilst these people feel Italian, on paper they're not. Above all, the law will bear favorably on those who, at around age 18, would only have been a year away for applying for citizenship. It will favor those who've passed through the Italian education system but who still have to wait ten years to start the expensive and exhausting bureaucratic process to obtaining citizenship.

The debate around citizenship arises from fear; fear of the 'other', fear of people's failure to integrate, fear of potential terrorist attacks... At this time in Italy, talk about the danger of racial dominance, easy citizenship and the "Islamisation" of society is out in the open.

To deny the right to citizenship means saying no to people who are legally living in Italy, who are registered, who have a doctor, who go to school and who pay taxes, contributing to the national economy. That's why, in the many protests that have taken place over the last few months, you can read: "Italy is a mother that doesn't want us as children," on many signs. With a lot of effort, some have managed to become officially Italian. But what needs to be done for the one million to get their citizenship, and what are the rights of these young people? 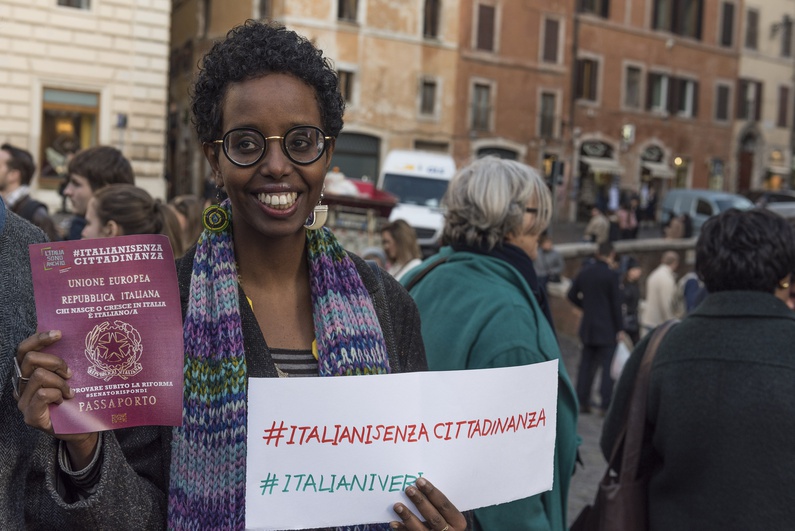 Blessy and her endless expectations

"My parents were granted citizenship before me," says Blessy Nambio bitterly. She was born in a hospital in Rome to Filipino parents, who have been in Italy for 30 years. Blessy is 28, speaks with a strong Roman accent, and was finally able to read the word "Italian" on her ID card just three short weeks ago. As a 'non-resident' for the first six years of her life, Blessy was unable to apply for citizenship at 18, despite being able to show evidence of going to school and receiving medical vaccinations.

She then had to renew her residence permit for more than ten years, first for family reasons, then for her studies. Having reached the age of 18 and being legally independent, she no longer met the income criteria required to apply for citizenship.

For Blessy, who now teaches Italian, citizenship isn't what makes you Italian, but it does make a difference. "Paper talks," she concludes. When she tells her students that she's an Italian national, they're not surprised: "Nowadays citizenship doesn't have an ethnicity," she explains.

Back in 2011, the notion that the Italian citizenship law needed to be reformed had already been brought to light. In Milan people realised that, although the law existed, very few youngsters who had reached the age of 18 were realising their right to citizenship – presumably because they were not aware of it. Milan, like other cities, had overcome the lack of awareness on the issue with a special initiative: send letters to any foreigners turning 18 and remind them that they can apply for citizenship up until their 19th birthday. However, this solution was only introduced in some municipalities and promoted by mayors while the initiative never rolled out across the rest of the country.

Shehan Horawala, born in Milan, remembers the moment that letter arrived at his house. As a child, his classmates saw him as 'foreign' because of the colour of his skin. "People still think that you need to be white to be Italian, that you have to have certain physical features," he says. The defeat of the State in the face of second generation Italians without a legal status is evident from Shehan's words: "I have never felt so foreign in my country than when I was forced to queue up at the police station, along with my mother, to renew my residency permit."

No one who has experienced waiting in line for hours at a time in the cold to be granted your turn to hand in documents, and have your fingerprint taken as a child, would say that it was a dignified and pleasant experience as an adult.

Now 28 years old, Shehan is a financial broker in the city where he was born and raised. He took his first trip around Europe at age 18 and for him, being Italian means "first of all having the opportunity to move and travel freely." He'll be moving to London in the hopes of continuing his career in the heart of the financial world. Perhaps, without the right information, Shehan would never have become an Italian Citizen. 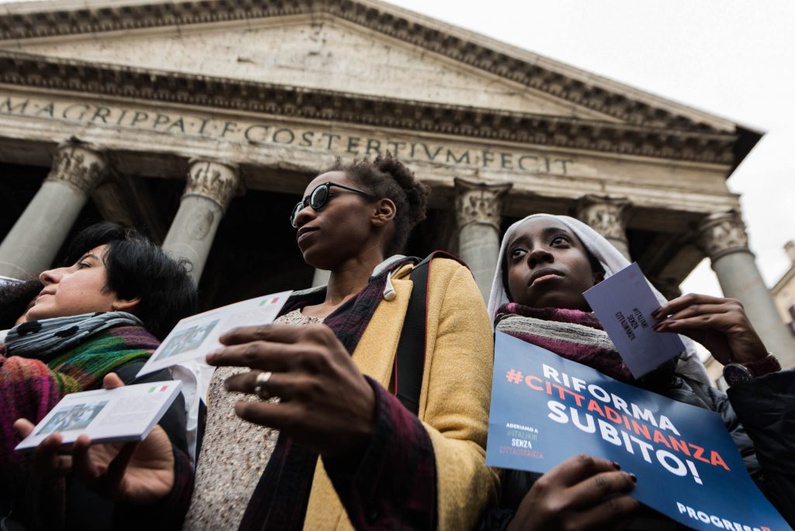 Like Shehan, Cristina also considers being able to travel freely one of a range of rights granted to Italian citizens.

Like Shehan, Cristina also considers being able to travel freely one of the fundamental rights granted to Italian citizens. Cristina Mallak was born in Italy but her parents are of Egyptian origins. Her father came to this side of the Mediterranean to escape the persecution of the Coptic Christians, leaving behind his degree in economics. After being granted Italian citizenship, he passed his citizenship on to his daughter. In 2007, when Cristina was in her last year of middle school, she played the Italian national anthem as her father took his solemn oath to the Italian Republic. 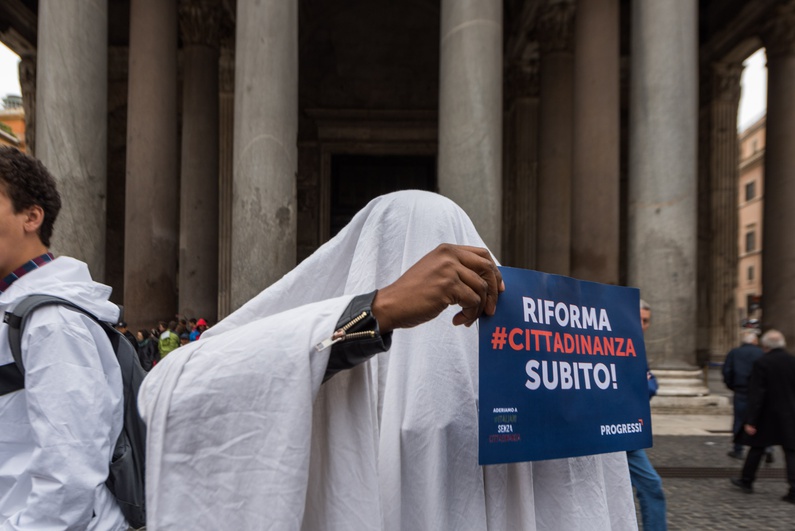 "Maybe not having citizenship would have stopped me from being able to travel around Europe and gain work experience as part of my studies," says Cristina. Culture and education are two factors highlighted by this bill. In the case of second-generation migrants, Italy relishes in its schools of excellence but doesn't safeguard the future (and present) of its country and people.

In her final years of high school, Cristina was rewarded by her region for excellent school results and has since continued her studies, graduating in international communication. She recently finished a year of civil service, which was previously off-limits to those without Italian citizenship. It's thanks to a petition launched by four second-generation Italians, along with the ASGI (The Association for Juridical Studies on Immigration), that now even "Italians without citizenship" can undertake a civil service.

Blessy, Shehan and Cristina feel "fortunate" to have obtained Italian citizenship. However, to support all of the others who are still waiting in limbo for a passport, all three of them joined the protests in the piazza along with thousands of others to carry on daily battles and open new roads for the children of immigrants; ghosts not recognised by their own state.