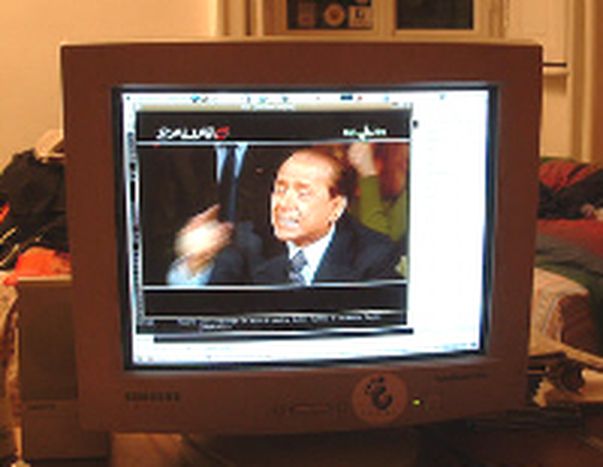 Italy labours to rid itself of Berlusconi

During his electoral campaign, Romano Prodi promised a radical shake up of the media. On the 19 July, the European Commission urged Italy to modify the unbalanced media law approved by the former government of Berlusconi

Italians are still waiting for Prodi government’s first show of strength. In the electoral manifesto of Union (L'Unione), the victorious centre-left party, Romano Prodi stated that he would address two major problems during his term as Italian PM. Not only did he want to reform media regulations, he also wanted to tackle conflicts of interest resulting from the political activities of Italian companies. In his programme, he states that "these two issues must be resolved as soon as possible because the current situation does not meet European standards".

With these words, Prodi pointed his finger at Berlusconi’s double dealings. Italy is the only European country in which a centre-stage politician owns three main national TV channels. Even if Il Cavaliere is no longer head of government, he still has a great influence over public opinion.

When Silvio Berlusconi became head of government in 2001, his company Mediaset hardly abided Italian media laws. At the time, a company could control at most 30% of the TV publicity market. Yet Berlusconi’s company piled up a staggering 60% of all advertisement profits.

Berlusconi therefore announced the Gasparri law, named after the Communications Minister at the time, which reduced the threshold of media market share from 30% to 20 %. At first glance, it seemed that Berlusconi was tightening media regulations in Italy. Yet the law asserted that the threshold would no longer apply to each segment of the media market but would be calculated for a much larger sector. The media market was redefined to include profits from the postal service, film and Internet companies.

These legal redefinitions enabled Berlusconi to expand his media empire. And in 2005, with a turnover of 603.4 million euros, Mediaset was more powerful than ever.

On July 19, the European Commission sent a formal letter to Prodi’s government, urging it to modify the Gasparri law. They claimed the law had created “unjustified restrictions” in the broadcasting industry.

What goes around does not come around for Berlusconi

A first phase of Prodi’s term is now reaching a close. And he has not yet dared reform media regulations. For Gian Enrico Rusconi, a politics expert from Turin, "the legal reform of the media is presently blocked because the party in power disagrees about the new laws".

In April it was already clear that internal squabbling within the party would emerge.

During an interview on the public television channel RAI, Fausto Bertinotti, president of the party Rifondazione Communista, asked Berlusconi to ‘slim down’ his media assets. He also demanded a new law banning Mediaset from owning more than two television channels. According to him, the advertisement profits of the company should also be dramatically reduced.

Prodi, on the other hand, never fully backed the radical demands of his coalition partner. In an interview with Time magazine on May 1 2006, he asserted that politics and information broadcasting should remain clearly separated. But he also declared that he did not wish to pass a ‘punitive law’, nor did he want to use ‘politics as an instrument of revenge’. Instead he merely announced a ‘anti-trust law’.

Gian Enrico Rusconi believes that an agreement will emerge within the centre-left party in the next few weeks. But Berlusconi is already set to counter-attack. The 64-year-old businessman has devised a plan to remain in politics while keeping his media empire intact. The daily Corriere della Serra reports that Il Cavaliere plans to donate more than 50% of Mediaset to his children if regulations are strengthened.