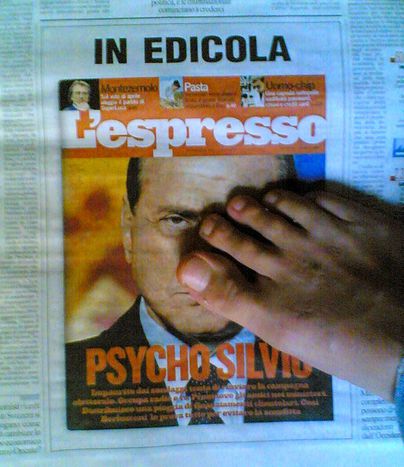 Sex scandals. Unending gaffes about women. A premier's embarrassing inability to stop talking about himself, showcased once again at a press conference with Spanish PM Zapatero. Two nationals discuss whether Italy become a tragedy or a farce

Alessandro, 29, is Roman by adoption. After years of studying a mix of communication sciences, film, records, travel and concerts, he has yet to find his true calling. For now he's working as a freelance journalist

‘If a contest was to be held to choose Europe's most sexist politician, Silvio Berlusconi would undoubtedly win.’ So writes an editorial from Britain's The Guardian, which for the last few months has paid close attention to the moral affairs of the Italian prime minister. Even The Times has reported that the president of the council of ministers of Italy should ‘seek treatment in a clinic for sex addiction.’ For Italians however, Berlusconi’s chastity – or otherwise – is of secondary interest. 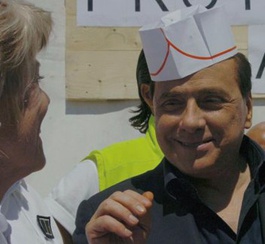 Above all, they are interested in what was legal or illegal in the inquest into the alleged series of phone calls arranged with the entrepreneur Gianpaolo Tarantini. Compared to this, investigation of the premier’s private life is of less importance. What is most irritating is Berlusconi’s attitude: arrogant, vulgar, the only cock in the hen yard, a tanned macho figure looking for prey on a sunny beach. This isn’t how one imagines a figure of authority. Obviously, a private life should remain just that – private. What should not escape scrutiny however, is his behaviour towards 3 billion people; the female population.

Unfortunately, it looks like he’s on to a winning formula. This is because, for more than ten years, Berlusconi has been the representative of the decadent model of Italian society: opportunistic, cunning, tough, a pimp, carrying himself with all the panache of a boor. This is an apt description of an Italian lobotomised by television and passing fads. As for women? He can evoke equality and the so-called ‘pink’ quota (le quote rosa), but ultimately they will always be considered to be objects, merely for personal pleasure.

Who hasn’t cheated on his wife once in a while?

Those who voted for and continue to sustain the party leader do not believe that his sexist behaviour is evil at base. Who hasn’t cheated on his wife once in a while? What harm is it if he returns in the end? In fact, the more he’s seen as a womanising lothario, keeping up the reputation of the Italian male, the more he is admired. There are many who would like to be like him, and they are. Though they make themselves out to be decent types, they hold up the ideals of ‘family’, ‘homeland’ and ‘security’. They boast about these achievements of theirs, as they judge the ‘whore’; the feminine equivalent of an identical attitude. The anthropological drama of Italy in the year 2009 has really been astounding.'

Giulia studied art history. 'As an expat in Berlin I can see my country better from afar,' she says. 'Here in Germany censorship isn't as great. At least you are out of the chaos which numbs the predominant counter-culture in Italy.' 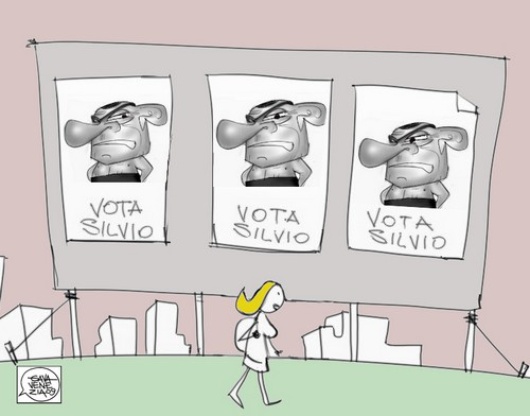 Berlusconi’s attitude has always been openly sexist. The question is, how legitimate is all this inquiry into his personal life? I would say that it’s justified, seeing that entry into our political process is not decided by a meritocracy, but apparently occurs through other forums and channels such as a visit to Villa Certosa, showbiz, and perhaps between the sheets of a certain famous bed. If the head of state is also a spokesperson for traditional values like faith and family, these questions take on a moral dimension and therefore assume a public relevance. The trouble is, such decadence has taken hold of the entire nation.

‘Predicare bene e razzolare male’ is an old Italian expression describing those who do not practise what they preach. That’s one tradition that is still respected. Abroad however, our image is become ever more pitiful. The Daily Telegraph has accused all Italians of suffering from sex addiction. This is the Berlusconi phenomenon which has afflicted the entire nation with a Casanova stereotype, of a satyr tirelessly seeking nymphs to seduce. What have we to say in our defence when the predominant representation of women on our television is the one, so shameless and vulgar, that was exposed in the documentaryIl corpo delle donne ('Women’s Bodies', 2009) by Lorella Zanardo and Marco Malfi Chindemi? After years of struggle, when the right to vote was won just sixty years ago, how do we allow ourselves to be represented by the chilling spectacle of these ‘shameless pieces of trash’, as the soon-to-be former Mrs. Berlusconi Veronica Lario has called them, that have come to be the legislators of our society, not only metaphorically but now literally as well? This addiction to sexism is a dangerous phenomenon and one that is not confined to Berlusconi. Do we realise that to some extent every time that a woman is the subject of a ‘gaffe’, a joke, it is not even perceived as an act of racist sexism? What about the continuing embarrassing and damaging claims regarding our premier? These are not harmless trifles, but an example of behaviour to entire generations. Do we remember his justification of rape? ‘Many soldiers would be needed to prevent it, Italian women are so beautiful’. The list of his gaffes is long, and the patience required to endure them has run out. Italy 2009: will this be a year of decadence, or of cultural revolution? Let’s rebel.'