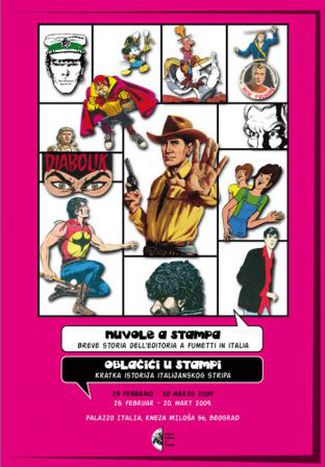 At the Italian cultural institute in Belgrade there was an exhibition that represents a retrospective of the first 100 years of the Italian comics with more than 250 illustrations divided into 9 sections.

«I can see that in the entire history of Italian comic books there are openness and sensitivity of Italian authors to foreign influences and authors. An example would be 1910s and 1920s when French influences came into Italy - for example, Antonio Rubino was one of the biggest importers of French art in Italian comic books production. This is followed by 1930s and '40s when Italian authors opened themselves to adventure comics and American school, first of all to Alex Raymond, the author of Flash Gordon. After that to Milton Cliff who influenced Italian authors, among which were Hugo Prat and Aurelio Galepini, author of Tex, one of the most influential Italian heroes, and all the way to Paolo Parisi who is our guest in Belgrade these days.»

The full article on www.wavemagazine.net