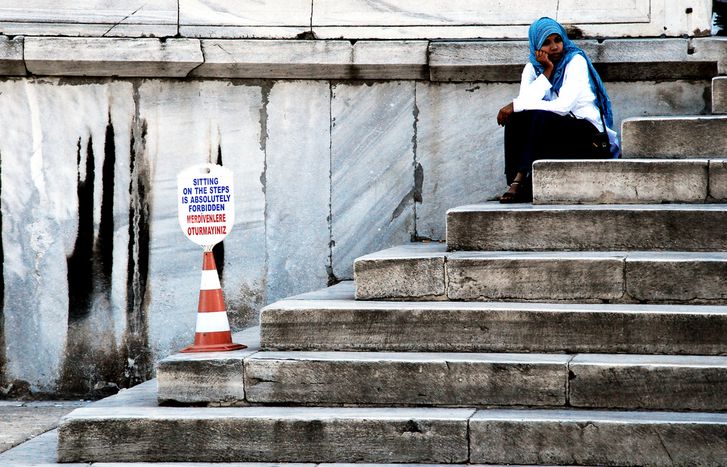 Hanging out on the streets of Turkey’s European capital can be an exotic experience for those who haven’t had too much contact with islamic culture. University lecturer and islamic history expert Anas Eryarsoy takes us though everything we wanted to know, but were too afraid to ask

At first glance it could be a European city like any other – the traffic, the crowds, the Burger King signs, the waiters on the street who try to invite you into their restaurants. That’s at first glance – if you stop and close your eyes, everything changes. The scents of the spices tickle the nose whilst a sweet, lamenting voice invade the air almost as if it wanted to stop time, and little cats everywhere angle for your attention. Open your eyes again and you’re in front of the Blue Mosque, one of the most famous of the 3, 000 mosques in Istanbul, and that’s when you finally realise that the real city is out there waiting to be explored. When we bump into Anas Eryarsoy outside, we end up chatting about everything and anything.

Archie (Spanish editor): That’s the muezzin, who else.

Anas: Yes, it’s the azan or call to prayer and to ensure devotees don’t forget Allah. You’ll hear it five times a day, from the break of dawn until sunset.

Federico: And what are they saying?

Anas: It’s the same repeated phrases – ‘there is no god but Allah, or ‘Allah the greatest’. When I say repeated I don’t mean its somethinh mechanical – it’s a prayer! Between the pauses the imam continues to pray under his breath.

Federico: Is there one for every mosque?

Archi: Yes, can’t you hear what it sounds like, as if they were all having a conversation?

Anas: Actually there is only one muezzin – well, there’s not only one for the whole of Istanbul, but rather one for every neighbourhood. He sings into the microphone in a special room and the loudspeakers are shared between different mosques.

Anas: In a way they’re the same, but our religión insists on the concept of oneness. Your gods are surrounded by saints and apostles. Our pantheons are much easier – only god is in the mosque. You’ll have noticed we don’t have sacred images nor effigies in our places of worship. It’s enough to love and pray only to god.

Federico: Well, at least you make a saving on saints. 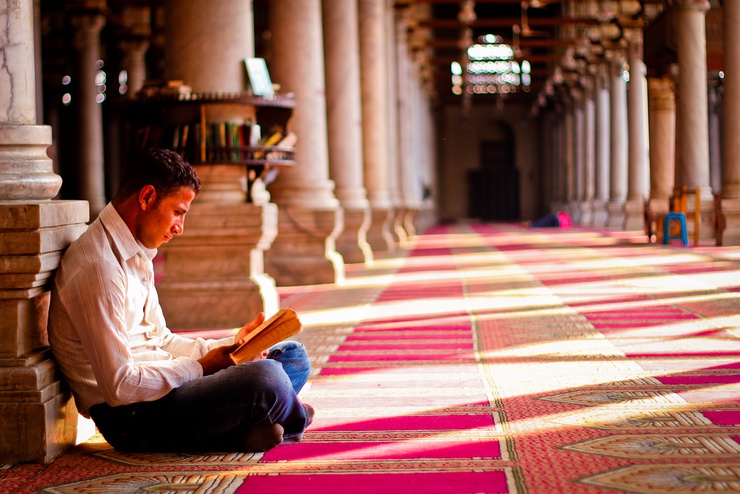 Anas: The most important thing is that we don’t have intermediaries. You have priests who are normally very important. We position ourselves directly towards Allah and are very free to manage our relationship with Him.

Archie: How, for example?

Anas: Well, we don’t have established prayers. Everyone has their own way of praying to Allah – you can ask for help or recite a part of the Koran from memory. We’re free to pray where we like, as long as it’s five times a day. It seems like a chore but it’s just a form of paying respect to Him.

Federico: But where do we position ourselves with regards to the imam?

Anas: The imam isn’t like a priest. He is exactly like us, just one more of us. He can’t take confessions from us nor conduct a liturgy. He has no powers. He’s just a point of reference inside the mosque.

Archie: What’s the criteria for choosing one though?

Anas: For their beautiful voices, that’s all!

Federico: Ah! You should tell the parish priests who are excommunicated for bad conduct. It’s better than the X Factor.

Federico: Was it Allah who wanted women to cover their heads?

Anas: Listen it’s you Europeans who see the veil as a burden, a will to hide. For us and especially us ladies, it’s just an ethnic accessory which is mentioned in the Bible too, from the references which appear in the writings. Maria and Mother Teresa wore them too before making their vows. It was worn for practical reasons initially – big religions were founded in the deserts, where it was necessary to protect the head from sun and sand.

Federico: Yes, but some of our female friends are obliged to wear the veil just to enter a mosque…

Anas: Yes, but you take off your hats before going into a church, it’s a form of repect in a sacred place.

Archie: Exactly the way you take off your shoes and wash your feet…

Archie: But why are women separated from men during prayers in the mosque?

Anas: It’s also about respecting Allah. We sit on our knees and we pray by pressing our heads onto the floor. The head is the most noble place in our body – can you imagine a man praying to Allah with a woman’s rear in his face?!

Federico: True, but the woman’s condition here isn’t the same as it is in the west…

Anas: There’s a chapter of the Koran dedicated to women, Mary’s chapter. Christian writings don’t seem to have the same thing, nor do they devote as much space to the woman. It’s the contrary – you just need to relativise it. Your aim is equality, our aim is justice. You want men and women to be exactly equal, and we enforce that by having a just society. For example, a woman doesn’t need to pray five times a day if she has her period, and she doesn’t have to fast during Ramadan if she is pregnant. Men and women are not equal. We try to be fair in exactly the moments when it comes to it.

Federico: Sometimes it seems your religion is not very tolerant. This morning we met a gay lad who said that here you can die for the simple fact of being gay.

Anas: But it’s got nothing to do with islam. This discrimination exists everywhere, not only in muslim countries. It’s the same argument for terrorism. If a man is bad it’s not because he is muslim – he’s just bad. A good believer only measures himself when it comes to the love he tries to show Allah. It doesn’t matter if you’re a woman, man, gay or bisexual – we differentiate the bad actions from bad people. A homosexual is not a bad person. Children are the most important thing for us, and a gay couple doesn’t gel with a child’s world. They’re a pillar of society and they need to have a mother and a father. The state provides financial help to families who decide to adopt an orphan to avoid them entering an orphanage.

Translated from Per le strade di Istanbul: l'Islam per negati