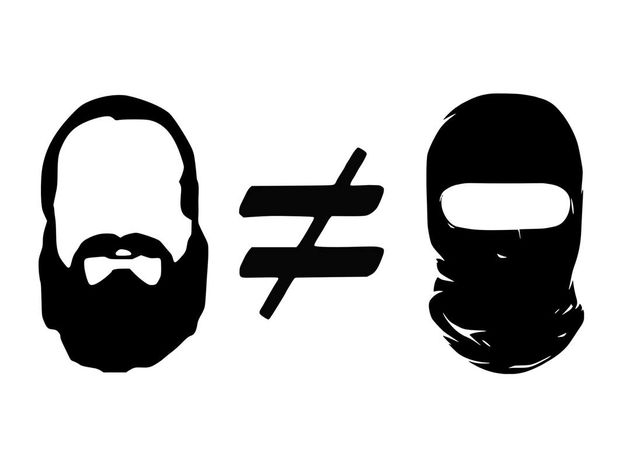 Islam does not equal ISIS: Re-establishing the obvious

Countering the equivalence between ISIS and Islam is not only a form of respect towards the majority of Muslims, equally horrified and frightened by the actions of jihadists. Combating Islamophobia is above all the most effective way to avoid being paralysed by terror.

Before writing this piece, I tried to deal with certain issues which continued to pop up during the writing process. I would here like to re-establish some of the basic interpretations of islamophobic narratives, which have taken on a new form following the attacks in Paris on Friday the 13th of November.

People who I respect, many of whom are clearly more influential than me, have urged people not to write anything on the subject, not to add to the chaos of reckless analysis and profile photos covered by the French tricolore flag. Do not pile chaos onto chaos. Do not become one with the tumultuous flow of people "taking a stand". Wait out the storm, retreat into silence, withdraw from the social arena, barricade yourself behind the process of mourning. I take the risky stance of differing from this opinion.

In the era of the frantic grasping for Facebook likes and shares, as a way of showing how brilliant we all are, writing a piece on this subject can mean, in my view, exposing yourself to a plethora of allegations of attention-seeking behaviour, of riding on the coattails of tragedy, of lacking competence. I am fully aware of this as I write this article. But, as I am going to write it, I believe it is because something needs to be said, and it should be said immediately.

It can make us sad, but it is in the heat of moments that are emotionally engaging for the public, that we should try to push through interpretative discourse seeking to restore complexity to events. In this case, placing the attacks in Paris within a framework that tries to counter, primarily through communication, attempts to spread an islamophobic message. Silence is a personal choice that I respect, but I think it is counterproductive from a political perspective. If only because the heralds of a new "crusade", even in newspapers considered to be moderate, do not allow themselves this luxury.

I have been studying and researching Islam for two years now, especially on the subject of political Islam: how this religious ideology manifests in a political arena. The contents of this article do not necessarily have to be original: I am happy thinking that it would be reasonable to not have to always start from scratch in order to challenge the narratives of those people who seem to always have Oriana Fallaci’s "The Rage and the Pride" ready on their nightstand.

ISIS is not Islam

ISIS is desperately searching for new militants. One of the most effective communication strategies that it uses is the franchising of terror: it claims authorship of attacks committed by those with a jihadist background, even when not committed by its affiliates, and focuses many of its efforts on striking at, or threatening, places and symbols of Western identity.

Terrorism is based on a practice of spreading insecurity, sending terror into metastasis. The purpose is twofold: the enemy feels surrounded and constantly in danger, and – in an atmosphere where a person’s religious identity can become the means through which they are discriminated – it argues that all those who call themselves “true Muslims” should be called to arms.  ISIS counts on eliminating the difference in people's minds between itself and the large majority of Muslims who are not reflected in this violence and terrorism, who live and reside in Europe and who distance themselves from ISIS preachers.

The collective islamophobic hysteria creates a disturbing paradox: the reprisals and revenge for any attacks are suffered by the very people who are fleeing from these terrorists. Calls for an intensification of the bombing in Syria come from the same political actors who want to close borders to those who are running away from these warzones.

The notion that "Islam equals ISIS" is necessary to jihadists' aims. They can only survive if they manage to become recognised as spokespersons for the heterogeneous global Muslim community; a community where not only are the fundamentalists a minority, but they are also divided within their own ranks, having geopolitical agendas that do not converge.

The self-proclaimed Caliphate is an "enemy of the enemy". To become the hegemonic jihadist force, Islamic State seeks support – and finds it – from the European right-wing, who are also invoking a clash of civilizations. This is a scenario in which "European culture" itself is deemed under attack, and would be defended through a new wave of domestic security policies, as well as neo-imperialist foreign policy.

That a Twitter account close to ISIS shared the front page of Italian newspaper Libero to fuel this anti-Western propaganda is self-evident. They are "allies", on both sides of the fence, sharing and fuelling the same interpretation of the world.

English distinguishes between the terms security, understood as physical security – the feeling of not being in danger – and safety, when linked to social, economic and political factors. The two are however related concepts. Economic and social hardships, and marginalisation, create the perfect combination for calling on the narrative of identity as propagated by ISIS. It is not religion, but politics, that creates terrorism.

A non-religious definition of the Islamic State is essential to defuse the time bomb created by the clash of civilizations narrative. ISIS becomes a politically fascist subject in domestic politics, and a neo-imperialist one in foreign policy, a peculiarity that is absolutely unlike anything in the Quran.

Several days ago, in Beirut, ISIS killed 50 Shiite Muslims and injured about 200 more. The Kurdish peshmerga, who for months and months have been fighting ISIS alone, are majority Muslim. Since its inception, ISIS has mostly killed other Arabs: Shiites, atheists, homosexuals and religious minorities. Can we speak of a war between religions, when most of the victims of jihadist violence are Muslim themselves?

Security is a concept that works both ways: you cannot lock down one part of the world, and at the same time leave another in chaos, whilst also claiming to maintain control over energy and financial resources. Neo-imperialism, the rhetoric of a "humanitarian war" and the "war on terror" initiated by George W. Bush in 2001, are all proof of this. The (successful) overthrow of Gaddafi in Libya and the (attempted) one of Assad in Syria threw both these regions into chaos. Responding to the same problems with the same failed solutions has resulted in imposing the same problems. Any attempt for careful analysis, I believe, must begin with this evidence.

Published by the local team at cafébabel Torino.