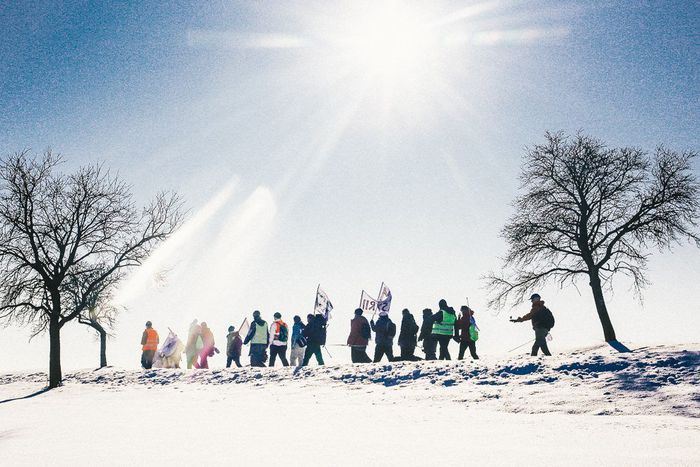 Is this the way to Aleppo?

The Civil March for Aleppo has been ongoing since December. Marchers are walking from Berlin across the Balkans toward Syria. Here, we tell the story of how a desperate video call became an initiative that brought together over 2,000 people from across Europe.

Anna Alboth is sombre, her voice audibly strained, when she says: "I was just sitting at my desk reading news from Aleppo, and it made me cry a lot." When Anna, a young Polish mother of two, released this video shortly before Christmas, the whole world seemed to be in a state of shock. Conversations in the media and all across the Internet were describing 2016 as one of the worst years in living memory and celebrating that it was finally coming to an end. This was exacerbated by the immediacy of the tweets and images that made it into our living rooms in real time from the war zones of Syria. The reactions were mixed, but the majority of  tweets, memes and gifs expressed an increasing feeling of helplessness.

Anna, who lives and works as a journalist and activist with her family in Berlin, says she felt at a loss for a long time. But at some point, she and her German husband Thomas had an idea - they launched a call to action for a march stretching from Berlin to Aleppo. "There are so many of us feeling the same way. I want to turn these tears and this anger into action. I do not want to just stand up for Aleppo. I want to go to Aleppo," she said.

Anna and her family have already made a number of trips together. On their blo, "The Family Without Borders" (Die Familie ohne Grenzen), she shares the family's stories from their road trips across Europe, and their trips to Madagascar and the Fiji Islands. Thomas provides the beautiful photography. This time, their journey is almost entirely different, though, as they will be travelling on foot (in all weather conditions) straight to Aleppo in Syria.

Even though Aleppo has been officially free since December, and tens of thousands of civilians have been able to leave the eastern part of the city, the situation remains relatively unchanged for the people of Syria. Whole cities remain closed off or under siege, food and medical aid is scarce. A report compiled by Amnesty International recently announced that up to 13,000 people were being kept in the military prison called Sednaja. These figures were widely reported in various media outlets which further stoked the widespread feelings of outrage amongst Europeans. Anna's march continues - in the truest sense of the word.

Anna and Thomas first contacted their friends and acquaintances. One of them was Sebastian Olényi, who was inspired instantly. "Officially, I work as a press officer of the Civil March for Aleppo in Germany, but I do everything: booking accommodation, organising transportation, registering the initiative as an association and so on,"  he says. Today, almost 30,000 people have joined these Forrest Gumps marching for peace, taken and each are taking their own steps in a bid to overcome every possible hurdle on their way to Syria.

It's all about the journey 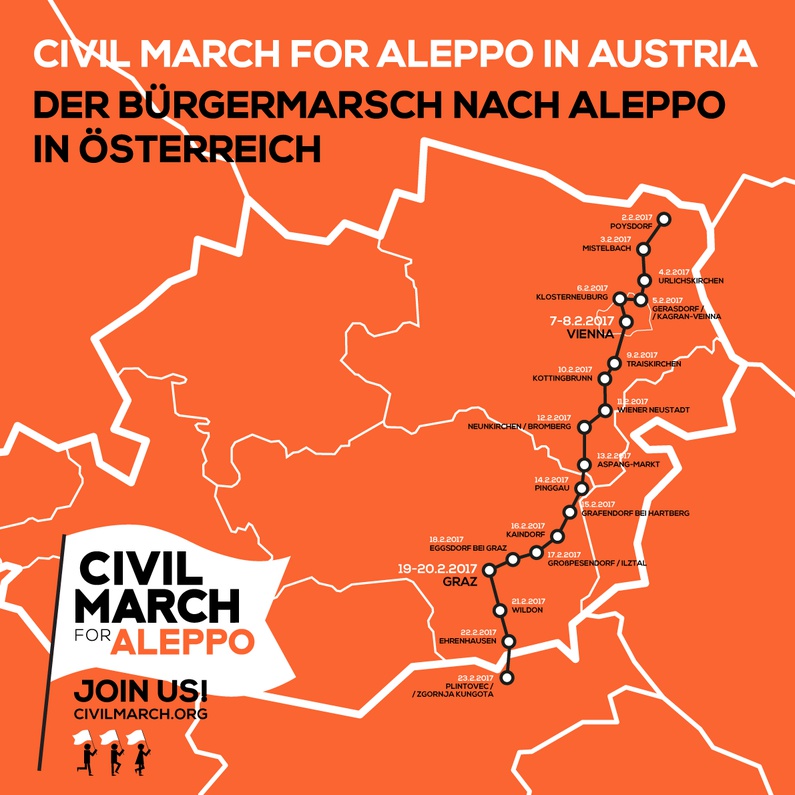 Anna and Thomas' appeal was successful and the group has been making its way towards Aleppo for almost nine weeks now. Their journey began on Boxing Day 2016, at Berlin's Tempelhofer field. Since then, they have crossed Germany and the Czech Republic. At time of writing they are making their way through Austriak and will cross the Slovenian border in a few days' time. The core group consists of around 50 to 100 people, but they are joined by others in the larger cities and often march in a group 100 to 200 strong. But the numbers and the faces change frequently. Most come for a couple of hours, or sometimes for a few days or a weekend, says Sebastian.

The group travels a distance of 25 to 30 kilometers every day. If everything goes to plan, the party will arrive at the Greek-Turkish border around the end of May. Whether they're going to make it to Aleppo at the end of it all is currently being debated. The civilians were, for the most part, able to leave Aleppo, so there is no longer such a compelling reason to go there. At the same time, the marchers do not want to put themselves in danger. Equally, they don't want to play into the hands of the Syrian regime. They are already planning the next stage of their journey across Turkey. Although Turkey is not considered dangerous at the moment, the organizers are negotiating with local authorities to protect the group on the ground. They are due to reach the Turkish-Syrian border in August. Until then, they have time to think and organize. 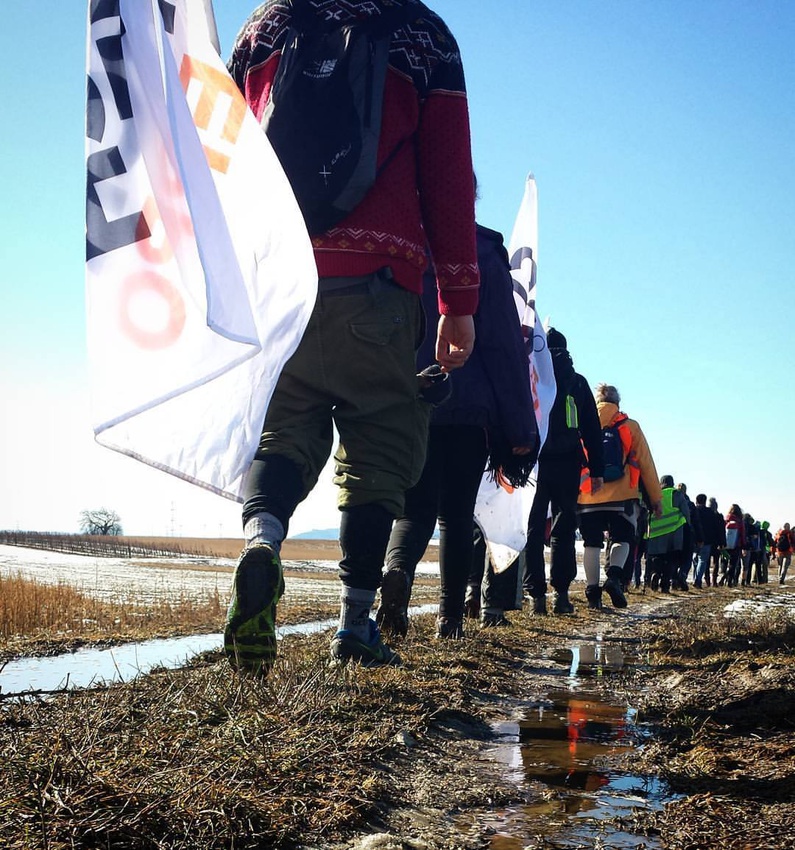 The group posts photos, videos and maps on their Facebook page every day. The photos show the group trampling through thick snow, across muddy fields and sleeping on gymnasium floors in colourful sleeping bags. Often, Anna films the group and their day to day lives. In one video she says, "a woman has joined us, she has quit her job to come with us. And our day got even better: we now have a band with us!" She then swings the camera round so we can see a few grinning faces, just visible beneath their with hats and scarves.

From the grey valley to the south

The group started walking in Berlin's grey and cold weather and so far have fought through heavy snow and strong winds. In January, Europe was gripped with cold, icy weather which affected the group. Sebastian doesn't want to talk about the blisters on his feet, his cold hands, and toes, or his painful shoulders. According to him, the message is important, and the refugees stranded across Europe are still freezing. 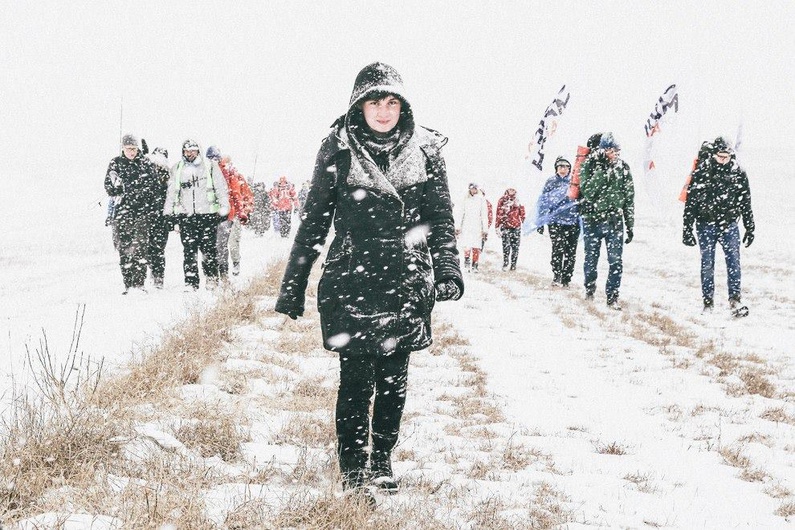 The group has spent many nights in school sports halls, but also in an old cinema, a fire station, and a mosque. The core team, which at the beginning of the march consisted of about 120 people, now consists of about 15 part-time members. The organisers work from Berlin, Warsaw and Madagascar. They call the town halls, where the group stops for the evening, to ask for somewhere for them to stay. The marchers also try to find local refugee charities or refugee families so that the group can meet up with them in the evenings. "It nearly always works out in the big cities, but we also try to set up an evening program every second or third evening so that we can continue meeting refugees and understanding their situation better," says Sebastian. 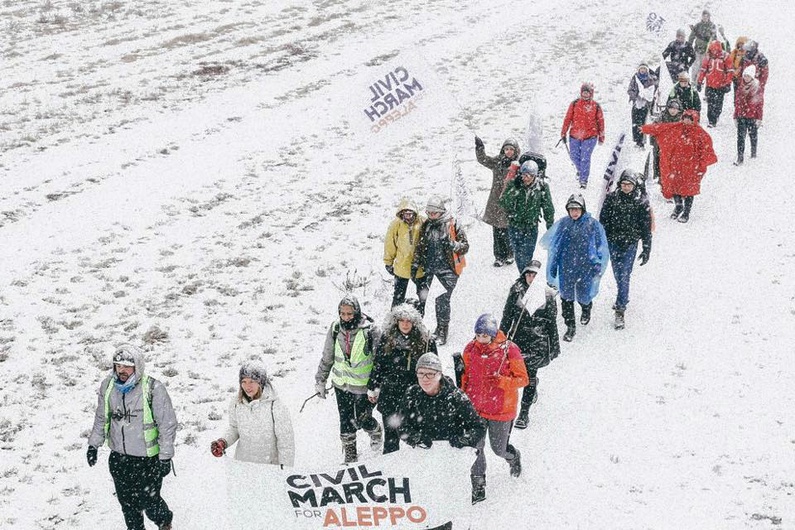 It wasn't easy to mobilise a group and organise their route in such a small amount of time. Anna started to organise it all mere days before the group set off, Sebastian recalls. But in this short time, the group's Facebook page has gained thousands of Likes, and many supporters commenting with positive messages like: "great idea", "Bon courage!" "Super." There were some critics too, who called Anna naive and the march dangerous, and even some who dismissed the whole idea. Some articles referred to the Civil March as "suicidal" - but most were far more positive. 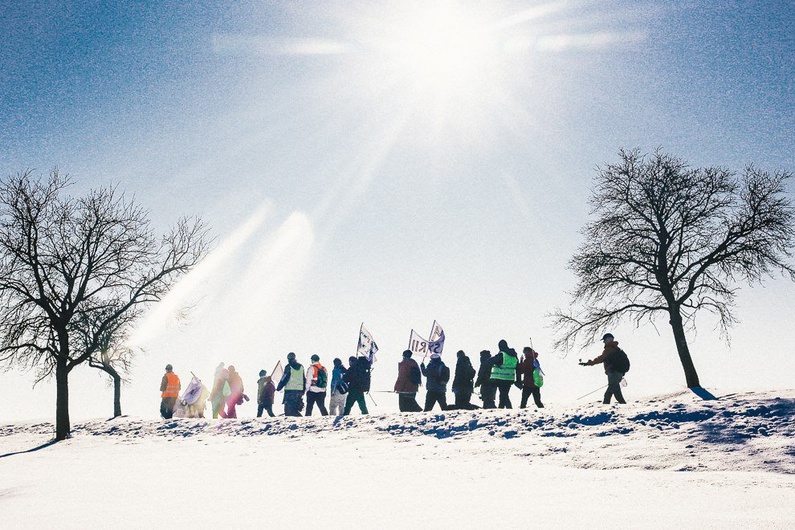 "We have been talking for quite some time now and we haven't really talked about why we are marching," says Sebastian. He stressed repeatedly that they are marching for peace, for the people of Syria, for human rights and to get humanitarian supplies to the civilian population.  Reports about the march often forget to mention this or don't emphasise it enough, he says. Sometimes the activists have to stress that "the important thing is not the march, but our message," he says. But ultimately, he's proud of the group and their achievements so far as over 2000 people have joined the group on their march! And the media coverage has been huge. "We're appealing to people all over Europe, it doesn't matter so much if we make it all the way to Aleppo as planned, what matters is that we've spread our message far and wide," he says.