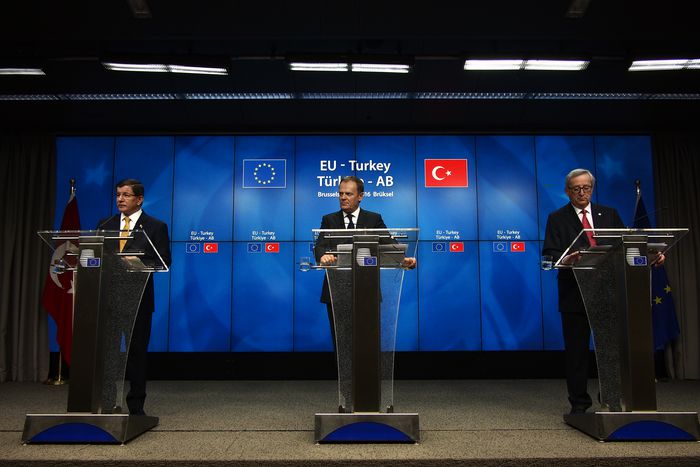 Is the EU-Turkey refugee deal legal ?

As EU leaders gather in Brussels to find a solution to the migration crisis, tensions are running high regarding the EU-Turkey deal which enables European countries to send migrants who arrived illegally on European soil back to Turkey, in exchange for a Syrian who stayed in the Turkish refugee camps.

Putting moral and ethics aside, is such a deal even legal ?

Let’s re-establish the facts. Since 2015, more than one million refugees reached European soil. For several months now, the mood in Brussels switched from empathy and goodwill to overwhelming and longing to find a solution to reduce the flow of migrants.

Today,  the final EU-Turkey deal was agreed upon. According to this deal, all refugees having reached Europe illegally through the Aegan sea would be sent back to Turkey, while a Syrian refugee who stayed in turkish refugee camps would be sent to Europe in the framework of a « humanitarian reinstallation ».

In exchange, Turkey is asking for 6 billion euros for humanitarian purposes, facilitation of visa acquisition for Turkish citizens, as well as the re-examination and the acceleration of  its membership process to the European Union.

However, the deal, a first of its kind, still struggles with its legality. While the aim of Europe is that the return to Turkey of all irregular migrants must be carried out in respect of European and International law, some flaws remain.

Let’s see what the issues are under the scope of two legal systems, International law and EU law.

International Law and the Geneva Convention

The Geneva Convention provides that « No Contracting State shall expel or return a refugee in any manner whatsoever to the frontiers of territories where his life or freedom would be threatened”.

According to Human Rights Watch, there are two basic conditions for a country to be considered a safe place of asylum: “ the country offers a genuine chance for effective protection, and there is no risk that that country will send them back to their country of origin or another country where they might face risk to their lives or liberties”.

The question is therefore how safe Turkey can be considered for refugees? Well the answer is : not so much.

It is no news that the Turkish governments has already sent back Syrian refugees to Syria. What guarantees that they won’t do it again if they are overwhelmed by thousands of new refugees coming both from Greece and the Middle East?

But that’s not all. While Turkey is a signatory of the Geneva convention, it is the only country at the moment who applies geographical limitations, meaning that currently only Europeans are guaranteed to obtain a refugee status in Turkey while people coming from non-European countries cannot be granted asylum.

So what about Syrians, Irakies and others that constitue the vast majority of the asylum seekers crossing to Greece?

Well, Syrians are garanted what is called by Turkey “temporary protection” that enables them to live in the country but does not provide them with the refugee status nor prevents them from facing plenty of challenges when it comes to protection, employment and education.

EU Law and the Asylum Directive

Is the European Council negociating in line with its very own set of legal rules ?

One point for Europe !

Second of all, EU law guarantees, just like the Geneva Convention, the possibility for every refugee to see his/her request for asylum processed.

However, as we saw, Turkey currently does not guarantee such rights to non-European refugees.

But, according to some sources at the Council, all refugees leaving Greece, will be granted a fair asylum hearing, a lawyer and an appeal.

Finally, transfering refugees to Turkey rather than their home country corresponds to the principle of « safe third country », defined in articles 38 and 39 of the 2013/32 directive of the Parliament and the Council.

According to these, member states can foresee no examination of a refugee’s request if the refugee has tried to enter, or has entered the country from a safe third country.

Following this, a safe third country can be called so if it responds to a set of rules that include the principles of « non refoulement » and the imperative that the country has ratified the Geneva convention with no geographical limitation.

Nice one EU ! Turkey remains the only country with geographical limitation to the convention.

Therefore, considering Turkey as a safe third country is not only highly controversial, it also seems like a clear violation of European secondary legislation.

While the EU-Turkey deal seems to aim at respecting both International and EU law regarding refugee and migration, the numerous flaws that remain in the text agreed upon today by Brussels and Ankara makes it shady from a legal point of view.

It remains to be seen how the deal will play out.