Is Sharon another Rabin?

The plan to vacate the Gaza Strip has taken on a new dimension with Yasser Arafat's death. But the extreme right in Israel is trying hard to make sure Israel does not withdraw from biblical territory 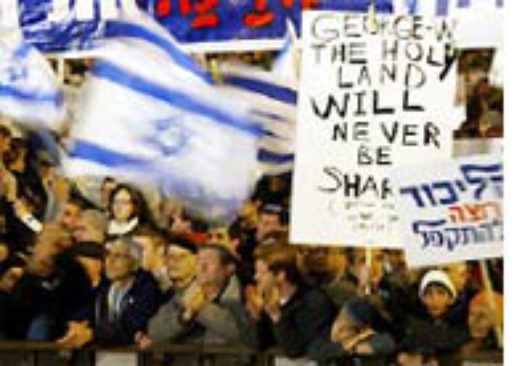 In April this year, barely 12 months after the drawing up of the internationally-backed peace plan known as the Road Map, the Sharon government presented a new “disengagement plan”. According to this new plan, Israel would vacate all the smallholdings on the Gaza Strip and remove its military presence from the area. In so doing, Gaza could no longer be described as being occupied land. Four small settlements on the West Bank would also be vacated. The plan was drawn up in agreement with the US and George W. Bush. The UN and the European Union also offered their support for the implementation of the Gaza-Plan, but stressing the need to continue with the Road Map.

At the same time, the plan to relinquish ‘biblical territory’ met with bitter opposition in Israel. The religious right stirred up the masses against their Prime Minister, Ariel Sharon. Rabbi Nebenzahl from Jerusalem announced, “Anybody who hands over Israeli land to non-Jews is a Rodef [an assailant who threatens Jewish lives and may be killed to preempt the danger]”. In the same month, the Israeli secret service, Shin Bet, confessed that there were a “dozen dangerous extremists in the country”, who were supported by between 150 to 200 Jews and who wished the death of Ariel Sharon. In addition, organisations of settlers were forging plans to hinder the evacuation of the territories outlined. The leader of the settlers, Pinchas Wallerstein, called for public disobedience, even at the cost of mass imprisonment. Orthodox Rabbi Shapira called upon Israeli soldiers not to take part in the evacuation of Jews from the biblical land as to do so would be to go against the "Will of God", and the number following his orders is steadily increasing. The spectre of civil war is stalking the media; the very soul of Israel is at stake. The conflict is between religious right and secular rule, and it is a conflict which shakes the very foundations of the Zionist state. How will Israel survive the conflict? As the left-wing newspaper Haaretz provocatively asks: will the state emerge as a puppet, unable to make decisions unless in accordance with armed religious groups in its own country?

From hawk to dove?

For many observers, the bitter hostility of the Right towards Sharon awakens memories of Sharon's predecessor, Yitzhak Rabin. The previous Prime Minister was prepared to make concessions to the Palestinians and was consequently shot dead by a Jewish fundamentalist in 1995. The Gaza-Plan does indeed contradict everything that Sharon has long fought and risked his life for. As a soldier and later as a politician he was always the “Hawk of Hawks”. Sharon was always against the evacuation of the Sinai Peninsula, the division of Jerusalem and the autonomous status of the Palestinian area. His primary concern was always the plight of the settlers. As minister in charge of the national infrastructure, and later as foreign affairs minister he fought for settlements in every corner of the Gaza Strip and the West Bank.

Has Sharon, who has formed a coalition with the Labour party (led by the Nobel Peace Prize winner Shimon Peres), suddenly become dovish? Hardly. When the Road Map came to an impasse, Sharon's last resort was unilateral action to demonstrate his own capability and to rescue his government. Whilst the Quartet (the EU, USA, UN and Russian Federation) celebrated the disengagement plan as a first step, Sharon's advisor Dov Weisglass disclosed quite a different interpretation in the month of October: in the long term, disengagement from the Gaza Strip will “freeze” the peace process and delay Palestinian independence, or so he hoped.

However with the death of Arafat, Sharon's plan has suddenly taken on a new dimension. There is now a possibility for peace beyond anybody’s expectations. For EU foreign affairs representative, Javier Solana, the disengagement plan provides an opportunity for getting back on the Road Map peace plan – on the condition that the Palestinians are involved and in agreement. This is where The European Union comes into play. Solana announced that the EU would send in experts to support the setting up of Palestinian security forces in Gaza. Europe could provide valuable organisational and financial help- providing it is given the chance to do so.