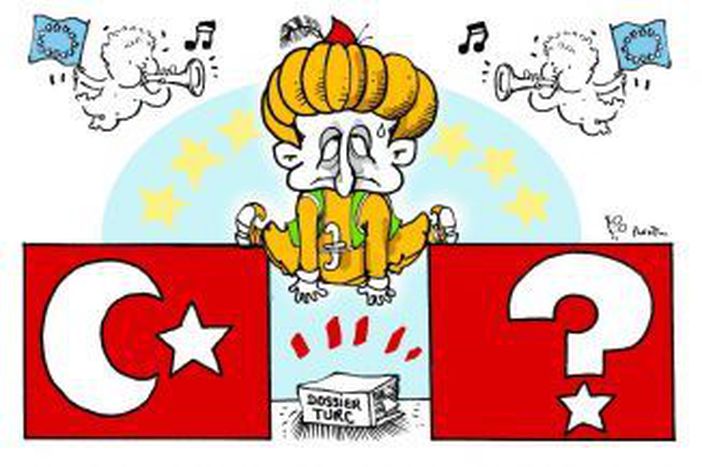 Is Sarkozy a Monsieur L'hypocrite About Turkey ?

Certainly, dropping the Accession word describing relations between Ankara and Brussels caused an disapponiment in Turkey.

Sarkozy’s effort to delete “accession” word from draft was not a surprise for me but I am surprised with Turkish PM Recep Erdogan’s declaration. Erdogan accused Sarkozy with “HYPOCRISY” acting. So, can we call Sarkozy, Monsieour L'Hypocrite?

Erdogan claimed Sarkozy supports Turkey’s membership while talking with Turkish politicians but trying to halt negotiations in Brussels. Anybody can claim Erdogan’s definition about Sarkozy’s politic attitude was false, but when it comes to Turkey’s EU membership he has always been a hardly opposing leader.

Actually I have never been and will never be surprised in the face of such oppositions about Turkey from Sarko’s front. Let me remind you some of Sarkozy's usual declarations since Ankara began enty talks in 2005.

December 2006: "I have often been asked about the place of Muslims in France, because of concern in the United States, my dear friends, let's be consistent. What's the point of worrying about our ability to integrate Muslims in France or in Europe if at the same time, and just as forcefully, the United States asks us to accept Turkey in Europe? Even if you consider that we have a problem with Islam, in which case, you have to give us time to find the ways and means to create a European Islam and reject an Islam in Europe. But don't then give equal support to the integration of a country like Turkey, with 75 million inhabitants. Consistency is part of the relations between Europe and the United States." (Washington Post)

April 2007: “The real problem lies with Turkey; I can not tell young French school students that Europe’s borders lie along Syria and Iraq. If we accept Turkey then, putting aside the Ukraine for a moment, we have to accept Lebanon, Israel, and the Magrib. (Le Figaro)

May 2007 : Said he will “launch a debate on Turkey’s EU membership,” and he will be against such membership. (The Times)

June: 2007: Sarkozy made his opposition to Turkey joining the EU a central element of his presidential campaign, telling voters that Turkey was geographically not part of Europe and arguing that the country had no place in an already overstretched union. (Liberation)

August 2007; Sarkozy will not block EU negotiations with Turkey because Ankara is in sensitive era. (Turkey was busy with Presidential and parliament elections)

Probably we will hear more and more these kind of unfair controversies from conservative front of Europe. Turkish politicians should ask themself about what they have done to weaken Sarkozy since 2005, they will realize, in fact they had done nothing about social and law reforms. Armenian journailst Hrant Dink has been the victim of 301 law, after and before this murder, lots of European and Turkish allies called goverment to amend this law but goverment insisted and didn't take heed them.

Instead of accusing Sarkozy and sparing its valuable time, Turkish goverment should criticize itself and accelerate democratilaziton reform packages. Turkey can encourage its European allies to frustrate Sarkozy, by approving reform packages.