In the world of alcohol, nobody ever knows what the next big idea will be, and it's hard to think of an original spirit, wine or cocktail for 2016. But each year, as spring fades, a crazy idea is born. This year's idea: a group of young Spanish entrepreneurs has launched a blue wine.

This funny story would have been short was it not for its impact. The media attention quickly elevated "El Vino Azul" to the status of the next rosé, and the company in question has already sold 70,000 bottles worldwide. But it all started almost as a joke.

A start-up from Portugalete (in Spanish Basque country), Gïk decided to take an interest in wine and shake up the traditional vineyard culture while they were at it. They were a group of twenty-something designers, programmers, artists and musicians with absolutely no expertise in the field of wine-making. In a very "punk" statement, Gïk claims it doesn't get bogged down in complexities. Their marketing reinforces the idea that they have no experience, and that we need to forget all that we know about wine, its traditions and perhaps even its taste. Their website is full of pictures of people clutching glasses of blue wine in front of a sunset. And to take it further, the box recommends pairing it with with sushi or nachos or guacamole, not forgetting to put some Alt-J or James Blake on in the background. LOL, indeed 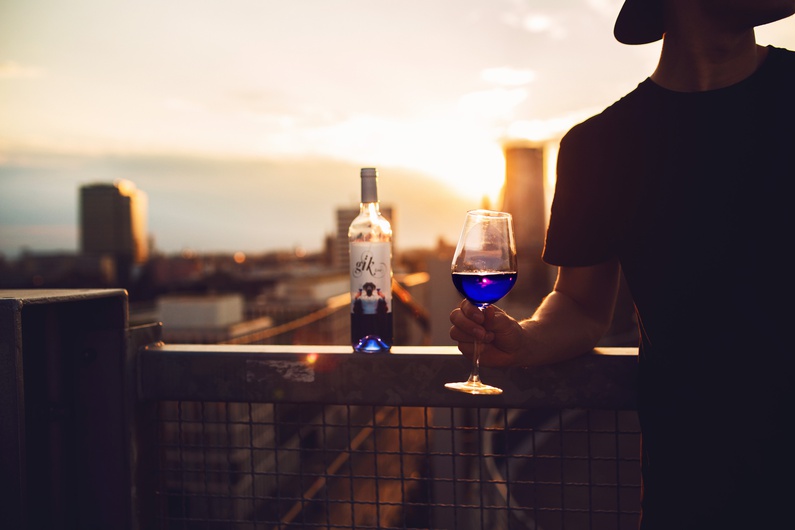 Interviewed by El Mundo Vino Azul representative Aritz Lopez, 22, explains that the idea actually stemmed from a real entrepreneurial project, started at university. "It was sort of crazy and avant-garde. But when we started working on the idea, we discovered a book called The Blue Ocean Strategy, which explains that there are shark-infested oceans, where the sharks have devoured so many fish that the water has turned red, but also that there are blue oceans where the fish roam free. We were drawn to the somewhat poetic idea of transforming a red ocean into a blue one."

What started as a running joke became an integral idea in Gïk's marketing campaign. The aim behind the slightly hazy concept is to do away with the pomp and ceremony surrounding wine consumption. The group realised that in 2016, young people no longer pay much attention to the customs surrounding the stemmed wine glass. Goodbye to assessing colour, aroma, and body - according to Aritz, "in Spain, our generation prefers beer, liquor, and cocktails. None of us likes traditional wine. It's based on this idea that we started our little revolution."

If our current era likes cocktails, it also likes disruption, and Gïk's revolution starts with the very chic idea of "disruptive innovation". Why is it blue? Simple: because this has never before been seen in the history of the winemaking. The Spanish start-up's mission statement ends a slogan worthy of Silicon Valley: "Drinking Gïk is not simply drinking blue wine, it's drinking innovation." What it tastes like remains to be seen. In a new exercise in transparency, Gïk gives us an idea on their website: innovation is a tad sweet, and should be consumed at 13°C. It will be composed of "different varieties of red and white grapes" from "different Spanish vineyards". Unlike curacao, this blue wine does not get its hue from artificial colourants, but from natural pigments called anthocyanins.

Sandrine Goeyvaerts is not so sure. The 35-year-old Belgian wine merchant, author of the blog "La Pinardothèque" stresses that the blue cannot come uniquely from the wine itself but from indigo, a natural dye. "The so-called 'natural argument' often appears in the advertising of processed wines, "she explains. "Effectively the dye is natural, but the wine isn't." For Jules Lamon, French oenologist, "it's a mix which must certainly be tasted, but I question its quality."

For Vincent Bonnal, who has been an artisan winemaker for 40 years, it's downright "taking the piss." In a nutshell, the blue wine is not wine, but" a cocktail steeped in marketing sauce." And for Goeyvaerts, that's what pops the champagne cork. "For some time, we have no longer been choosing wines based on their selling points and not their taste. Like the fashionable aromatic wines such as pink grapefruit, this blue wine tries to establish itself as a cool trend, suitable for nightclubs and poolside drinking, implying that the other wines are too stuffy." 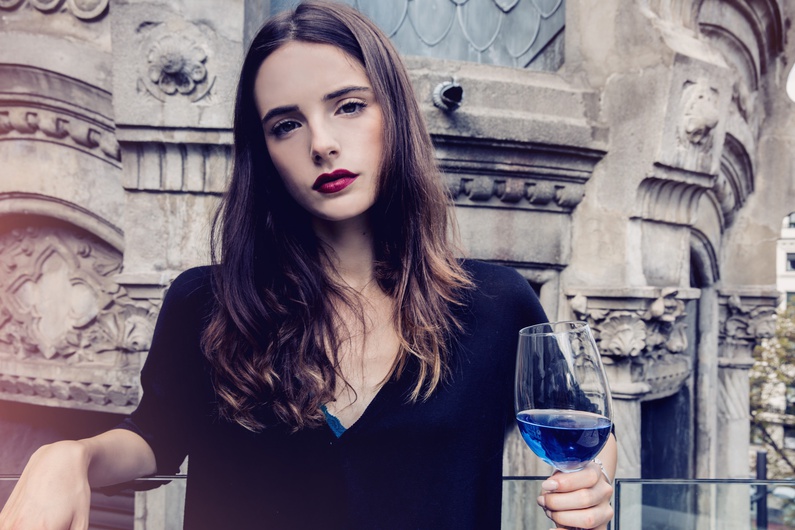 An oft-repeated is the idea that Gïk's habit of ignoring and overturning traditions risks eroding the whole of wine culture as we know it. Sandrine Goeyvaerts reiterates: "It really strikes a chord with people who feel that they know nothing about wine, they're being offered a product that has no instructions other than "have fun".

How the story ends is anyone's guess. The question is, will wine drinkers be interested in painting the town blue?