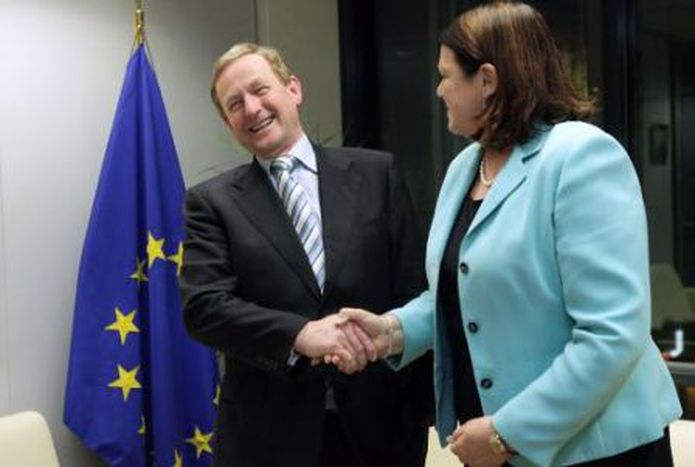 Irish sovereignty and European solidarity: ‘til debt do us part...

By Séan O'Dubhghaill Enda Kenny, Ireland' just appointed Taoiseach (Prime Minister) and leader of the Fine Gael party (EPP) is in a tough spot, despite being elected with a strong mandate (36.1% of the vote).

Today in Brussels he comes face-to-face with those European counterparts that he both strongly opposes on matters of national sovereignty and EU/IMF bailout negotiations, but is also most engaged with. Enda kenny’s party mentioned the EU 30 times in their election manifesto. This article tries to marry those ideas.

The €85 Billion EU/IMF bailout is coming to the fore again on the back of Kenny’s election to the position of Taoiseach. Kenny has mentioned his intentions to: “renegotiate a more credible package that is better for both Ireland and Europe”. Two days ago he was congratulated by the president of the European People’s Party Wilfried Martens who said: “I am convinced that Enda Kenny will soon bring Ireland at the centre-stage of the European Union (EU)” with it also being widely reported elsewhere that he received a frosty reception while in Helsinki.

Ireland currently pays 6% interest on bailout money, far below the market standard and with an ever-growing sympathy for the interest rate to come down, primarily to lessen the burden on European taxpayers taking the hit.

An incentive to fail?

What is of concern is what mechanism exists to ensure that no more banks collapse, and that the EU/IMF bailout isn’t incentivising financial ruin. Enda Kenny has something of a tightrope to walk along; ensuring that his party members don’t believe that he is conceding too easily to austerity measures, designed to be punitive (unnecessarily punitive according to some), versus concessions made to national sovereignty over sovereign risk. Namely Ireland's low, low corporate tax rates.

I’ve written elsewhere on the corporate tax rates and it’s view in Europe, but it has become a more hot-button topic since the time of writing. Fine Gael, and almost every other political party in Ireland, in their attempt to get elected to office mentioned their immovability on raising Ireland’s corporate tax rate. It may be for this reason that they received a chilly reception in Finland, that or the weather...

National sovereignty and national risk are seminal matters for political leaders; and if either is let go without a fight, that’ll be the Enda him-