Iranian filmmaker Ahmad Farahani: "I could not tell myself the lie"

Last October, during the Festival Internazionale in Ferrara, northern Italy, the Iranian journalist and filmmaker Ahmad Jalali Farahani presented an exposé on the crackdown on journalists in Iran through a screening of his 2014 documentary We are Journalists. We sat down with the director to discuss his work.

The suppression of journalists in Iran began after Mahmoud Ahmadinejad’s rise to power in 2005 and continued following his second electoral victory against Mir-Hossein Mousavi in 2009. This victory was overshadowed by allegations of electoral fraud, leading to massive protests, brutally repressed by the country’s security forces.

Farahani’ s documentary depicts a state of constant intimidation, under which Iranian journalists are force to live with the danger of arrest, imprisonment, violent beatings, torture and exile. The Director experienced this brutality first-hand, when he was imprisoned in 2010. After experiencing these threats, his family migrated to Denmark, where he has been living ever since. 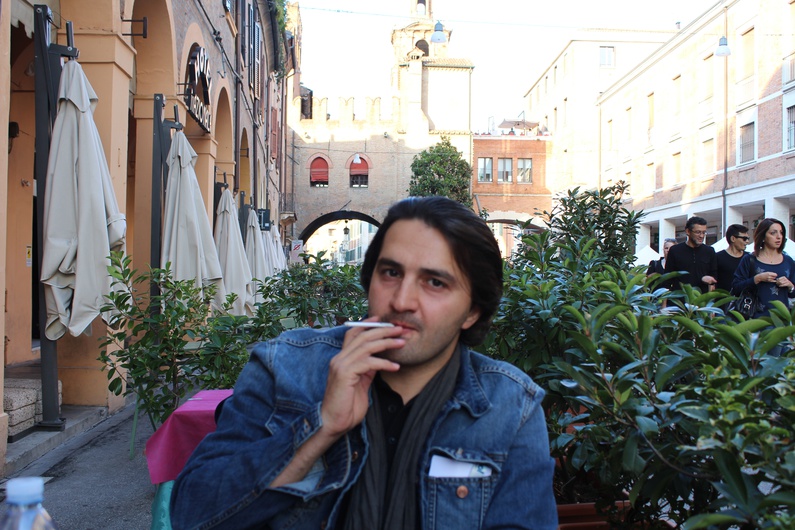 The director, who also has experience as both a stage and screen actor, has no doubts about the value of freedom of speech and journalism: “Freedom of speech is very important for the freedom of the world, not just in Iran and in the Middle East. We are Journalists is a film about the meaning of real journalism. I’ve lost my job, my future; the regime seized my home and bank account….Everything. Why? I could not tell myself the lie.”

“We have two kinds of journalism in Iran, real journalism and ‘fashionable journalism’. If you say that you are a real journalist in Iran, you may face torture, jail and a process of isolation." He explains how more than 150 journalists left Iran after 2009 and more than 300 more lost their jobs. Ahmadinejad’s regime banned the Association of Iranian Journalists and a lot of newspapers have also been closed since 2009.

The state of repression is continuing today, under the government of Hassan Rohani. According to the Committee to Protect Journalists’ 2015 Prison Census, Iran ranks third for having the highest number of detained journalists, in a list that includes Egypt, Turkey, Bahrain, Eritrea and Saudi Arabia. One of the strengths of the documentary is the fact that the director does not provide a distanced viewpoint on these processes of repression, but rather that of a witness within the country itself.

During our conversation Farahani discusses Ahmad Zeidabadi, the first journalist exiled to a remote region of Iran since the Revolution of 1979. Specifically, he was sent to Gonabad, in the north-eastern Razavi Khorasan province. Zeidabadi is a well-known Iranian journalist who was arrested in June 2009, shortly  after Ahmadinejad’s re-election. He was sentenced in November of the same year to “six years in prison, five years in exile and a complete ban from political and journalistic activities” – as quoted by Reporters without Borders.

UN experts called on Iran to stop the intimidation of journalists ahead of parliamentary elections last November, following the arrest of five journalists. In the same month, Reyhaneh Tabatabaei, a reporter and political activist, was sentenced to one year’s imprisonment for “spreading propaganda against the regime”.

The complex architecture of power in the Islamic Republic is the key to understanding the power struggle that is currently occurring, and its domestic effects in the context of this week’s elections, set to be held on the 26th of February.

These consultations will elect, for the first time, both the Islamic Consultative Assembly, also called the Islamic Parliament, and the Assembly of Experts, composed by theologians charged with electing, removing and supervising the Supreme Leader of Iran.

In the context of the Iranian political scenario, Farahani is critical of Western attitudes: “Western countries, like the UK, hope that they can support some moderate party inside Iran in order to change the political situation in the country. That is not a good decision. If Western countries think it could forward their agenda, this is not true. Reformist and moderate political parties in Iran have no power, no money… ”

The exclusion of the moderate cleric Hassan Khomeini, grandson of the founder of the Islamic Republic, from the list of candidates for the Assembly of Experts in Iran, along with other moderate and reformist candidates, supports this argument.

Farahani argues that external organisations should opt for supporting internal actors in Iran: “[Western pressure groups, NGOs, etc] should remember that any change should come from inside Iran. Of course, they should support Iranian journalists outside of the country, but they should also connect with journalists and human rights activists inside it and push their own politicians to talk very seriously about human rights and not just about nuclear deals.”

“[The Iranian people] are tired of revolution,” he concludes, “We can see what has happened in Syria, Afghanistan, Yemen, and other countries around us. I don’t want to talk to intellectuals in the West but with normal, ordinary people. If the world wants to change the behaviour of the Iranian regime then they should support us… because we are journalists.”