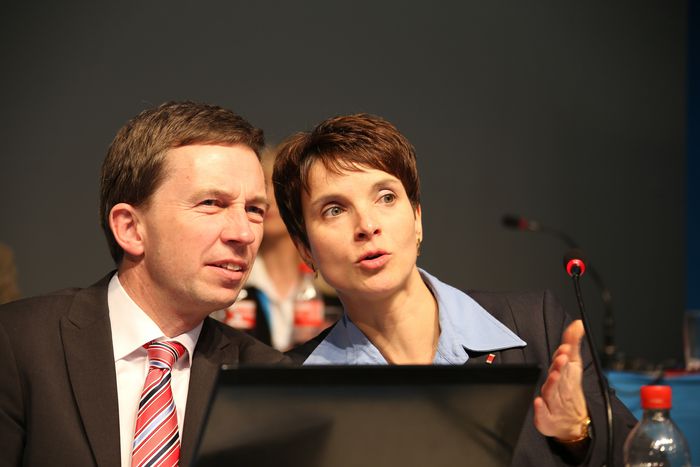 Inside the AfD youth wing: Alternative to... everything?

The protest party Alternative for Germany and its youth movement are stealing potential votes and supporters from both the left and the right, even in Berlin.

A small, colourful group of about young 60 people gathers around an old VW van sporting megaphones on Alexanderplatz in central Berlin. They wave large banners calling on the German government to put an end to the refugee deal with Turkey and accept more refugees.

The atmosphere would almost feel festive if it weren’t for the four police vans accompanying the march around city hall – two driving in front of the group, two in the back. "You never know if things will turn messy," says Moussa*, a Malian asylum seeker from one of the local Refugee Unions who holds a poster baring the statement: "No world without migration."

I ask him if anything bad ever happened to him or his friends, but he cautiously denies it. A friend of his – Lisa* – says that explicit violence is a rare occurance in Berlin, yet one still needs to be careful. It's not so rare that such demonstrations are followed by counter-demonstrations, and if it weren’t for the police cordons no one knows how far it may go.

The rise of acceptable racism

Just 20 years ago, when Germany was undergoing its reunification process, both East and West suffered from anti-migrant pogroms and hate-crime. When the refugee crisis reached Germany after Angela Merkel's short-lived call for open borders in the autumn of 2015, the rise of the anti-migration right seems to be a trend once again.

This time it's not confined to the margins of society, but is creeping into mainstream politics. "I am not that afraid of thugs," says Moussa. "I am afraid of politicians." If there is one political movement that exemplifies the dangerous trend of radicalising politics, it's Alternative für Deutschland (AfD, or Alternative for Germany in English) and its youth wing Junge Alternative (JA). 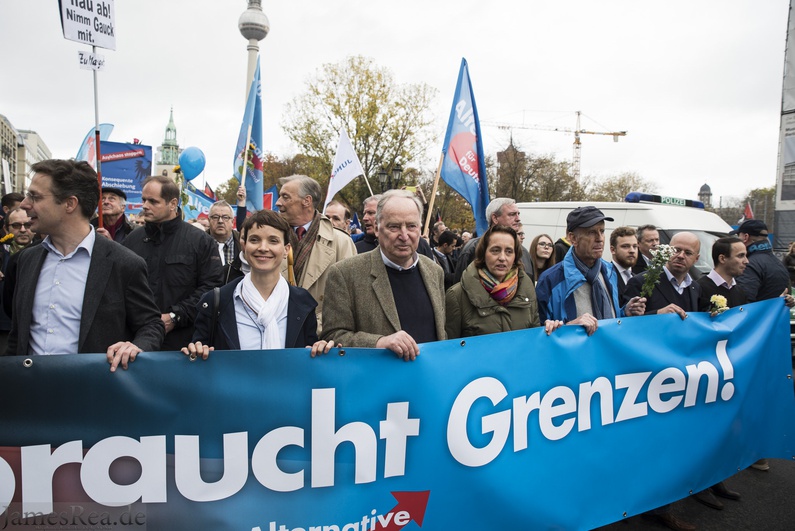 What was originally a party led by economists who wanted to put a stop to German bailouts of Greece, the AfD really gained traction once it kicked out its original leader and co-founder Bernd Lucke and – under the leadership of Frauke Petry – turned its rhetoric against asylum seekers last year.

"The original AfD was politically moderately right-wing and economically liberal, mainly focused on Germany’s withdrawal from the Euro," explains Proffessor Dieter Rucht, fellow at the Berlin Social Science Center. "Today’s AfD is right-wing populist but has significant overlaps with an extreme-right ideology, though keeping apart from Nazi groups."

Almost overnight, the single-issue-party became standard bearer for a complex mixed-bag of both conservative and liberal policies. They are against refugees entering the country and women wearing hijabs in public places, yet at the same time they take the libertarian idea of abolishing the minimum wage and the conservative stance that women ought to stay at home in the role of the traditional housewife. (As a member of the JA in Saxony once put it on a poster: "I am not a feminist, because being a housewife is a profession.")

They oppose cannabis legalization, another conservative position, but are also against the TTIP – a top priority on the left-wing agenda. This leads to a number of curiosities such as a tweet from the youth movement in Berlin with regard to a march against the trade deal organised by the far-left party Die Linke: "Next time you could have 2000 supporters if you'd only asked us."

The two sides of the political spectrum are getting so close to each other on a number of policy issues (as well as the level of political rhetoric) that Die Welt even ran a popular quiz in which readers had to attribute certain political statements to one of the two parties: AfD or Die Linke.

But what attracts young people to such a strange mix of ideologies? The answer is quite straightforward: disenchantment with mainstream politics. "Part of the youth feels completely alienated from established politics. They are disoriented and worry about their future," says Professor Rucht. He goes on to say that these young people are seeking simple and clear solutions to these problems. 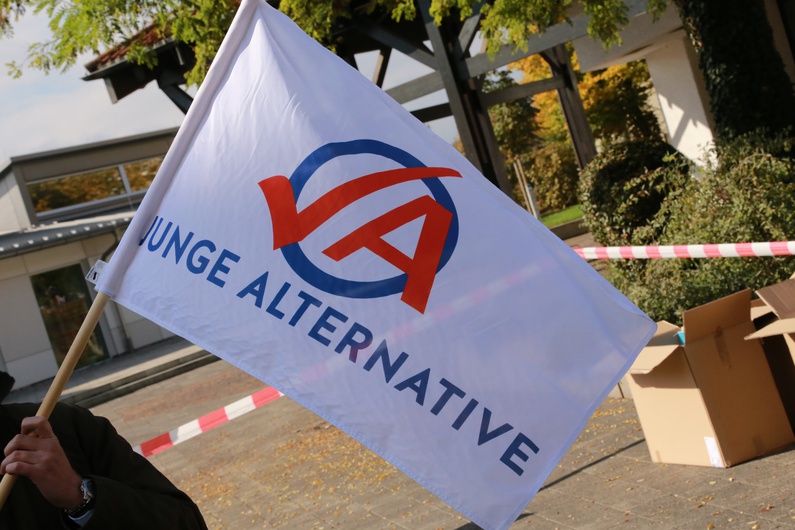 However, that's not how the Deputy Chairman of the JA John-Lukas Langkamp sees things: "The mainstream politicians try to fix problems they cannot fix – like the Euro crisis – by proposing simple solutions to avoid electoral defeat. It is our future they are gambling with and they don't try to fix problems at their roots."

Yet, simplicity definitely plays its part when it comes to organisation. "The JA is a new and different youth organisation. In contrast to other political movements like the Junge Union of the CDU, we are not forced to be prissy. Our members enjoy freedom of participation," says Langkamp.

Getting into the ranks of large parties may be overwhelming and climbing the ladder is not for everyone. In the JA-Berlin, which has around 40 active members, it's much easier to shine. "The typical member is male, between the ages of 20 and 26, and a graduate," says Langkamp. This is visible on the organisation's website; all of the portraits are of young, smiling white men in suits. Nothing like the usual image of far-right nationalists.

"We trust in a very rigorous and detailed process when accepting members," says Langkamp, adding that if they find radical or extremist points in a membership application, or if the applicant shows support for ultranationalist party Nationaldemokratische Partei Deutschlands, they decline the application immediately.

Cleaning up their image

This wasn't always the case. Clearing out the far-right elements from the ranks of the JA and getting recognized by the AfD as an official youth movement took almost two years. The extremely xenophobic comments of JA supporters enraged even the Finance Minister Wolfgang Schäuble, who called them a "disgrace to Germany". It was the JA in Cologne that invited UKIP leader Nigel Farage in 2014, at a time when the leadership of the AfD was trying to distance itself from its prevalent anti-immigration image. Since then, the party has embraced this very image.

Although the AfD hasn’t been that successful in traditionally left-leaning Berlin, the latest polls from the Infratest agency show a steep rise in support for the protest party in the German capital: from 5% of voter support last September to a staggering 20% in the Eastern suburbs of the capital, AfD was the second favourite party during April. 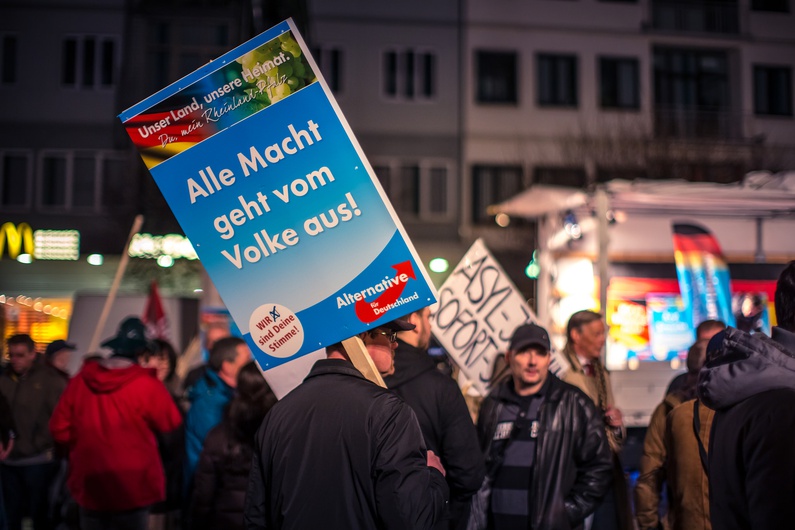 Meanwhile, the rating of all other established parties, including Die Linke, is on the decline. Although not as explicit, public support for AfD in the Western part of the city is also on the rise. The AfD steals from both left and right, and this is not only visible when it comes to potential voters. The leadership of the party in Berlin includes an ex-Die Linke politician, as has also had former Christian Social Union (CSU) and former members of Merkel's Christian Democratic Union (CDU) run for office. Among youth leadership there are those with links to the "Identity" and "Freedom" movements.

It might seem strange that such a wide variety of voters are coming together, but there are concrete reasons for such an occurance. A recent study from the Open Society Institute discovered that people are not happy with the way local administration ignores their voices when it comes to the constructing refugee shelters. Both in less affluent neighbourhoods such as Marzahn-Hellersdorf (where the AfD scored 11.7% of votes in the 2014 EU parliamentary elections) and the middle class Biesdorf suburbs, the problem is the same: there is a vacant spot of land waiting to be developed, but the authorities, without consulting the local population, erected temporary refugee housing. This kind of decision-making seems to have created a void between people and politicians, and such voids are just waiting to be filled with something just like AfD.

*Some names have been changed.