First of all, to start with something positive, happy International Women's Day, I wish you lots of courage, freedom and solidarity, and a better, more equal world for all of us.

Unfortunately, with a gender pay gap at 15% and only 3% women in biggest enterprises, with women performing 3 times more unpaid labour at home than men here in Lithuania, real equality still looks like a distant lighthouse in a foggy sea, but it is also the day to appreciate the achievements of today. We have many more choices, and some struggles present in the West are somewhat solved over here. Most women work full-time rather than part-time, and they are not expected to be housewives. Lithuanian women are the most educated in the EU. Mothers enjoy a long parental leave with substantial compensation. Homosexual women are treated with more respect and recognition than before, although partnerships are not legalised and discrimination is not receding.

To celebrate this day, I joined an event organised by an anarcha-feminist association "Feminist Front". We watched some videos and had a discussion about the objectification of women's bodies in advertising and gender stereotypes in general. The event took place at the premises of the Lithuanian Gay League. As I went into a courtyard shared by several unnumbered houses, I got completely lost. Slipping on thick ice, I walked around several times, not able to find the right house. This is for a good reason, I thought. No signs, nothing indicated where to find the Gay League.

This is obviously for security reasons. Insiders know where to look for it, and unfriendly outsiders are not supposed to. While it's only recently that some Lithuanian politicians try to make our country look like explicitly attempting to become a champion of LGBT discrimination in the EU by drafting various legislative proposals that would severely limit the right to self-expression for LGBT people, the society is taking a different direction. There is still a lot of homophobia, but openly LGBT individuals generally do not risk to be beaten up for holding hands or dressing atypically. Yet security concerns are still there. The community can never know who feels like vandalising it or bothering incoming and outgoing members. Therefore it is very difficult to find from the outside. It should not surprise anyone that even when the levels of acceptance will have grown, the internalised fears of discrimination and violence will still haunt LGBT communities for a while. It was just so recently that openly gay or lesbian celebrities or any discussion about homosexual couples as families would have been unimaginable. Tense atmosphere is perpetuated by homophobic jokes and hints at workplaces or among acquaintances.

Another, unrelated observation that I would like to share relates not to the internalisation, but to socialisation of inequality and stereotyping. The traditional Mardi Gras festival happened recently. For most it is only a pancake day, but traditionally there is a parade with lots of scary masks. The aim of the festival is to scare winter away. A few years ago the festival in Lithuania made it to the Israeli press, describing in detail how some participants of the masquerade derogatorily portray Jews. This is true and rather widespread.

A little bit of background here. The pagan festival, close in its content to Halloween and Purim, is supposed to serve as a wake-up call to frozen nature, celebrate fertility liberated spontaneity. A part of the masks were a snapshot of the pre-modern society, structured by clear ethnic-class-gender boundaries. They portrayed not only Jews and Roma, but also doctors and Hungarians, and various regions had other professions and social groups 'represented'. I remember making a mask of an angry old man when I was a child - now I should probably feel ashamed. 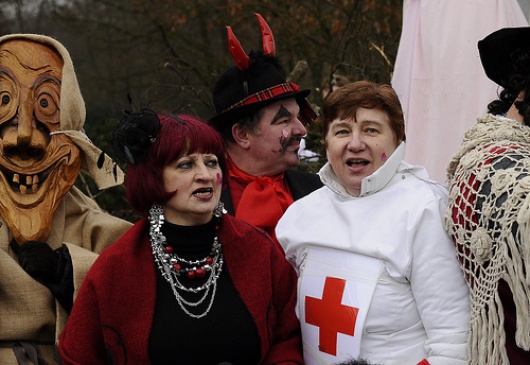 A much larger share of the masks are witches, monsters and devils. Some animal masks are traditionally paraded too - they stem from totems of long forgotten tribes. As anthropologists have observed in various groups, other cultures, or the essentialised 'others', were often perceived to serve as a link between the known everyday world and the unknown. Portraying them in masks had a place in the world of those days, when these cultures were encountered on a daily basis, but largely remained unknown. Jokes and stereotypes were common on both sides, and they were more equal centuries ago.

This is not the situation now. 95% of Lithuanian Jews were murdered in the Holocaust, others faced discrimination in the USSR. At least two big tabloids used to promote antisemitism on a regular basis a few years ago. An antisemitic remark by a minister of foreign affairs was leaked. The Jewish Community building in Vilnius was vandalised. Issues around property restitution cause lots of tensions. The atmosphere is anything but secure and dialogue-friendly. I have no idea why people would perpetuate the tensions with the festival, having in mind that social, ethnic and class relationships that these masks would portray are long gone. And I recently learned that the tradition is far from dying out.

I happened to talk to a primary school-age child. "Do you want to see what game we learned at school?" I was asked. OK, why not. The 'game' only included clapping of hands, moving one's elbows up and down, and stomping one's feet. But the words that come with it (don't look for coherence in children's songs) were something like, "Black Jew, red Jew, Jew Yodl - mak mak mak" [onomatopeia].

"Where did you learn it??" I asked, in surprise, to put it mildly.

"Our teacher taught us this."

"Why would she teach you such a song?"

"She said it's a Jewish game!"

"Why would Jewish people do that?"

Seeing something very remote from admiration in my eyes, the child got defensive. "Our teacher told us so. [Name] was dressed as a Jew, so he was standing in the middle of a circle."

Not being quite skilled in talking to children, I finally formulated some some more questions. "Did he look nice or scary when dressed as a Jew?"

"[shrug] He had artificial side curls, a black hat and a black coat. All black."

"Did the teacher explain you who the Jews are?"

What do I tell a child of that age? "Well... let's say, they are people of a slightly different culture... You know, like there are Poles, for example..." I realised it was a lame explanation.

"My mom once said they used to live in Lithuania."

"Do you think they would be happy or upset by seeing you make fun of them?"

The child frowned. "I'm not making fun of the Jews! Our teacher told me it's their game. [sings the song again]"

What will I say to this? What would YOU say to this? Children are open-minded. They can accept many things as normal without seeing a contradiction, and do not have a problem changing their opinions. But it's beyond my imagination why educators would, instead of trying to lessen the prevalent tensions, explicitly fuel them. There are many other songs to sing and games to play with children. Unlike their great-grandparents, these children don't know what it's all about. They don't know what discourse they are, without knowing it, participating. They can't be expected to be conscious about these things, but educators can, and they should be held responsible. Nothing like this took place at my school, perhaps because teachers were alert about the presence of Jewish pupils. Have teachers who do teach such 'games' ever thought whether there are actually any Jewish students, silently suffering being forced to name, basically, themselves black, red and other nonsenses? What about mixed-heritage individuals, whose Lithuanian surnames may keep teachers not alert about the existence of cultural diversity in the classroom?

There is just so much discrimination that happens every day without any bad will, unconsciously. Mean, lame jokes about ethnic and religious minorities, unequal treatment of LGBT persons, patronising and stereotypical expectations against women - all of this can be done with a smile and in perfect ignorant innocence.