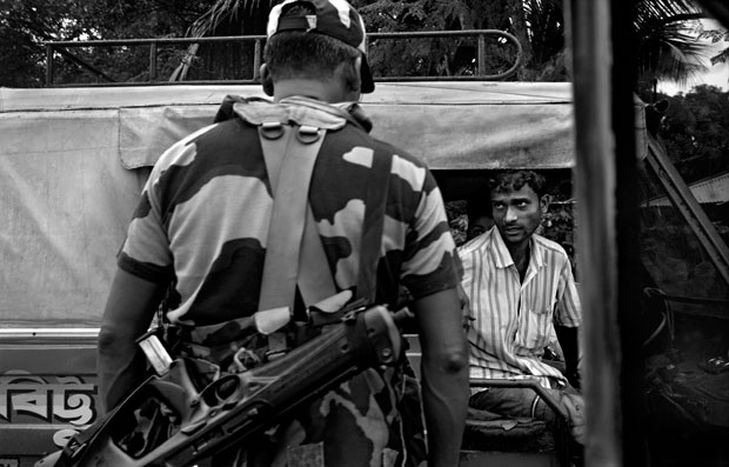 India-Bangladesh: The Other Wall

For the past two years, Belgian photographer Gaël Turine has crossed the region which is located close to the separation wall between India and Bangladesh. The fruit of this photographic work, entitled The wall and the fear, has now become concrete with the exhibition at Botanique in Brussels.

Do you know anything about the 3200 kilometres border wall between India and Bangladesh? It is enough to quickly research the subject in order to realise how Gaël Turine's project uncovers an unknown, but important, reality.

In 1993, the wall was built; this line of demarcation is an endless succession of barbed wire rows, concrete and bricks. It extends the whole length of the border between India and Bangladesh. On either sides of the wall, a zone of nearly 150 metres is supposed to constitute a no man’s land. 220,000 soldiers of the Indian Border Security Force (BSF) and 70,000 of their counterparts with the Border Guard Bangladesh (BGB) patrol day and night to ensure the wall, which is the longest geopolitical barrier in the world, remains unbreeched. The cost of the construction of this wall totals up to $4 billion USD. Since 1993, its maintenance has increased the bill by another $1 billion USD.

So, that's the factual aspect. On the ground, this construction has various social, economic, environmental and religious results. It brutally disrupted an ancestral system of commercial exchange. It also lies at the root of a violent repression towards the various local populations, especially Bangladeshis.

In order to understand the ins and outs of this militarised frontier, it is undoubtedly crucial to plunge into the history of this part of the world. In 1947, the colonial British Empire divided India along religious lines: on the one hand, the predominantly Muslim Dominion of Pakistan (present-day Pakistan and Bangladesh), on the other hand, the Union of India, with a mostly Hindu population. In 1971, Bangladesh declared its independence. For a long time, thousands of Bangladeshis flooded into India without being bothered by the authorities in New Delhi. But during the 1980s, this immigration has become more controversial. As a result, in 1986, the central government decided to construct a division line between the Indian region of Assam and its neighbour, Bangladesh. Twelve years later, the Indian authorities have decided to extend this wall to the entire Bangladeshi border. The government presents several justifications for the move: to stop clandestine Bangladeshi immigration, end all kinds of traffic and present an obstacle towards the Islamic terrorism. 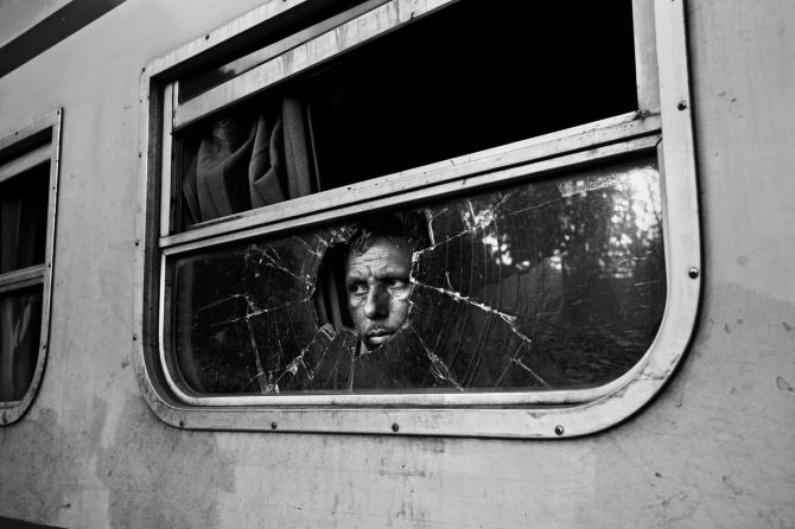 A death every five days

A "horrible" video discovered on Internet alerted Gaël Turine about the fate of the residents who are moving towards the edge of the Indian-Bangladeshi border. Armed with his camera, he left to meet the 'forgotten' of international media. Gaël Turine was born in 1972. He studied photography in Brussels. His works are regularly exposed and published within international press and has won many awards.

The exhibition is composed of black and white photos along with an instructive video interview of Gaël Turine. All of the negatives include a title, or even a text, which gives its authentic dimension to the image.

The Indian-Bangladeshi wall has the sad reputation for being the most abusive border in the world. According to the numbers provided by New Delhi, a person dies every five days trying to cross the demarcation line. Beside these official numbers – which could easily be described as underestimated –, there are the frequent torture cases and rapes perpetrated by the soldiers of BSF and, to a lesser extent, by the BGB.

The majority of these victims are of Bangladeshi origin. Living in one of the poorest and most densely populated countries in the world, they see neighbouring India as some kind of El Dorado.

As Gaël Turine's photos show, there are lots of people who try to illegally pass to India on a daily basis, regardless of the risks. 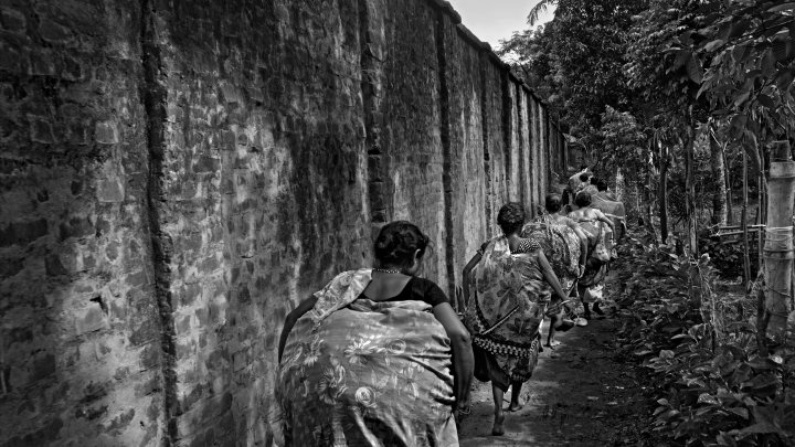 There are these women who run along the wall in the border town of Hili. They go to India to buy spices, beauty products, medications or jewelry to resell in Bangladesh. They follow each other closely in order to disperse if they have the bad luck of finding themselves face to face with Indian soldiers. 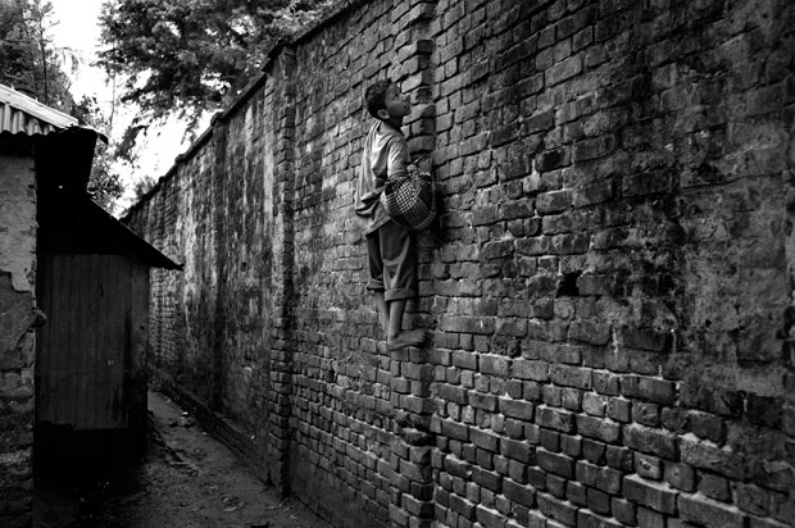 There are also Bangladeshi kids who carry goods from one place to another for ridiculously low pay. 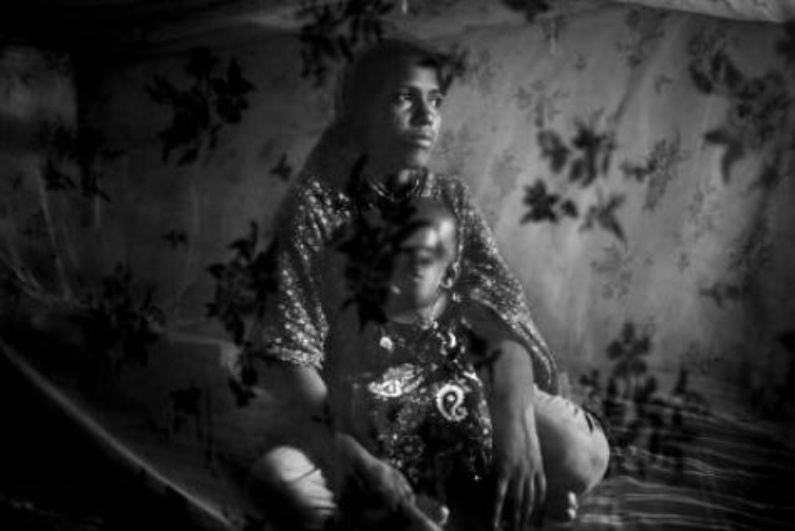 Gaël Turine tells the story of the border-wall and the surrounding zone through individual stories. His series including the portraits of victims or portraits of their family members are particularly striking. For example, we discover Roksana's story, who has lost her brother and her father, killed by the border guards. At the bottom of this group of photos, the titles are more exhaustive and, even for three of them, the titles feature a testimony by the main character.

The wall and the fear is a long-term project. The Belgian photographer had the luxury of taking his time, of listening, of exchanging ideas, in order to better tell the story of this wall and its residents around the edges, in the cities and in the slums. Moreover, he explains that the photos represent only one-twentieth of the time that he spent with the people.

On the ground, Gaël Turine's task has not been easy. The BSF and BGB military officers have developed a large network of informers in the villages. Every three days, the photographer and his translator had to change locations in order to avoid raising doubts and being spotted by the border guards. The Indian authorities, as their Bangladeshi counterparts, have no interest in talking about the wall. They tacitly agree in order to hide the violations and avoid the arrival of journalists.

The interview of Gaël Turine would not have been possible without the invaluable help of Odhikar, the Bangladeshi NGO concerned with the protection of human rights in the area. Its members accompanied the Belgian photographer and his translator in every zone and helped Turine make contact with people at the border, by explaining the project to them. In the end, even though many residents were interrogated after the passage of the photographer, none of the families were worried. However, one of the members of Odhikar could not return to his former workplace, a newspaper, for three months.

In order to finance his work, Turine could only rely on the support of the press. Because of the ignorance of the issue or due to budgetary reasons, none of the press outlets "believed in this story." So, the Belgian photographer had to turn to grants.

Despite these difficulties, The wall and the fear exists. The interview of Gaël Turine has become concrete within the form of an exhibition, which will take place at the Fait & Cause Gallery in Paris after Brussels, but also his book is published within the Photo Poche collection by Actes Sud.