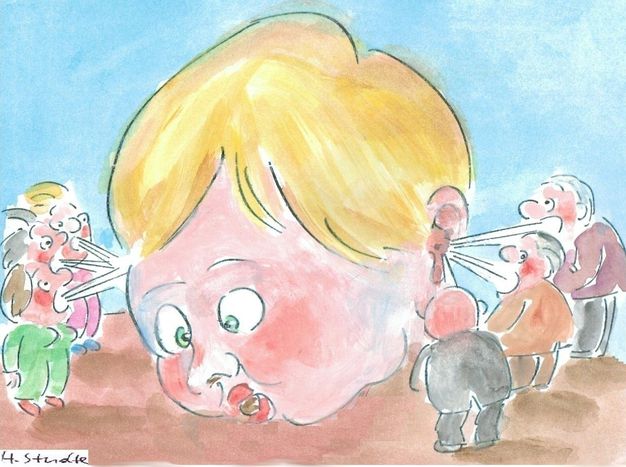 In one ear and out the other

Idiomatic expressions Europe seem to be quite uniform when describing the feeling you have when someone is not listening to your advice and has a short attention span. Save from the pea-throwing Poles and violin-urinating French slang, that is

First, came the multitudes of deaf. Words first started to fall on deaf ears in biblical references, and the phrase became a full-blown cliché in Britain used from the nineteenth century onwards. The Spanish (hacer oídos sordos, ‘make deaf ears’) and Germans (vor tauben Ohren predigen, ‘preach before deaf ears') use the exact same phrase. In French modern slang however, its like 'pissing into a violin' (avec lui, je pisse dans un violon), darkly expressing the inutility of the act.

Second, came the prophecy. There is universal acclaim across European languages in an idiom which laments on how your advice can go in one ear and out the other. It’s how the Spanish ‘indignados’ or indignant citizens feel about the state (le entró por un oído y le salió por el otro), how the protest-fanatic French and Italians responded in kind to the same event (ça rentre dans une oreille et ça ressort par l'autre, entra da un orecchio ed esce dall'altro). In Poland the expression takes an ever-so-slight variation: something ‘falls’ into one ear, yet ‘gets out’ via the other (jednym uchem wpada, a drugim wypada).

Third, came the wall, which could be applied to the whole European project in total from a federalist angle. It’s like talking to a wall in encouraging eurosceptic prime minister David Cameron and co. of the virtue of supporting a broader Europe, or the former French prime minister Nicolas Sarkozy who lost control of his Europe feeling in the last days of his outgoing presidency (parler à un mur). One remarkable interpretation of the saying in Poland is it’s 'like throwing peas at a wall' (gadać/ mówić jak do ściany); or rather, to throw zlotys at Europe in this context.