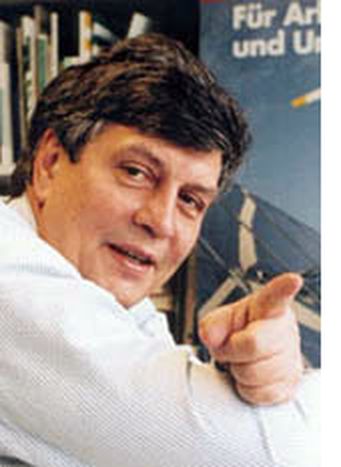 In an interview with café babel, Herman Scheer, winner of the Alternative Nobel Prize, tells us why German energy legislation has created a dynamic which spells the end for atomic energy and fossil fuels

Despite being a member of the Bundestag (the German Parliament), the Social Democrat Herman Scheer does not shy away from criticising his party colleagues when it comes to defending his belief in renewable energy. Scheer, who is also the President of ‘Eurosolar’ and Chairman of the World Council for renewable energy, has called the Government’s block to setting up an international agency for renewable energy a scandal. However, positive impulses are coming from Germany - such as the Renewable Energy Sources Act, which will force a change in the power supply.

For years now you have been calling for a change in energy production. However, nuclear energy is booming and the per-capita consumption of fossil fuels is increasing constantly worldwide. Are you a lone voice crying in the wilderness?

No, I’m not alone in the wilderness - to use the same metaphor. You could, perhaps, say that I’m standing in a wilderness that is constantly broadening due to the consequences of conventional energy consumption. The worldwide use of fossil fuels is increasing massively despite what we know about the consequences. Thank God we don’t yet have a boom in nuclear energy, although we do unfortunately have a boom in the rhetoric for nuclear energy.

But nuclear plants are being increasingly favoured by (fast) developing countries…

No, they are talked in to this. Unfortunately, in Asian countries there are plants being built now. This is connected with the fact that international institutions are based on the promotion of atomic and fossil fuels. The unmistakeable problems and boundaries of these forms of energy, including their dangerous nature, are being ignored. The structure is anachronistic: there is the International Energy Agency for fossil fuel safety, which plays an advisory and supportive roll, and there is the International Atomic Energy Agency, which advises governments worldwide on the development of their nuclear programmes. Both agencies systematically leave out information concerning renewable energy when talking to the different states. This anachronism is a political scandal.

Why aren’t European politicians fighting harder for a change in energy sources, for example through supporting an international agency for renewable energy?

Here there is conservative institutionalism in play, which is typical of a worn out political system. These institutions, even the UN mechanisms, defend themselves against the foundation of an international agency for renewable energy because of petty institutional jealousy. [As a result] agreement between them will not be possible. The initiative must come from a group of states, which say: from here, we’re starting over. And this is exactly what the government hasn’t dared to do, despite repeated demands from the Bundestag. Above all, it is the Department of Environment which refuses to implement such a resolution.

Are there many promising, exemplary initiatives for a new energy supply already in Europe?

When talking about energy production, the leading example is the Renewable Energy Sources Act in Germany. In accordance with this Act, each year new installations capable of producing up to 3000 megawatts of renewable energy are built. Currently, the existing installations constructed under this plan can produce a total of 18,000 megawatts. If things continue at this pace, the complete conversion to renewable energy will be achieved in 40 years, although the sources of energy may change. The boom in wind energy will decline at some point and there will be more calls for solar energy, bio-energy and geothermal energy. Structural change has begun and in a really dynamic way.

How do you see the future of European energy supply? These developments require a technological revolution in energy supply and no previous technological revolution has come about through an international treaty that everyone has fulfilled. It always happens that some set the waves in motion because the arguments of those that block these developments are always full of holes. It is inevitable that more and more countries will follow suit.

So even nuclear energy giants like France will change sooner or later?

There’s nothing more certain. The main arguments against renewable energy are that it will not work and it is too expensive. However, it’s clear that in the future, conventional energy forms will be more and more expensive, if only because of the growing shortage of fuels. With renewable energy, where (apart form bio-energy) only technology is in play, the system can - by increasing mass introduction, industrialisation and the improvement of production techniques - make energy forms cheaper. The attractiveness of renewable energy will increase every day, especially because of the advantages to the environment and energy safety. More and more businesses will recognise the great industrial opportunities for the future and, as with every other technological revolution, international competition will increase its consumption. The fact that in such a crucial sector as energy, which is connected with so many solutions for different problems, all previous experiences regarding technological revolutions are forgotten is completely absurd.