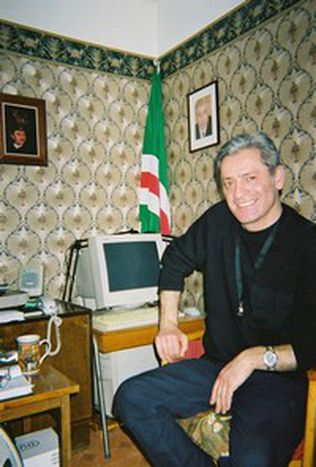 Imran Ahhayev: ‘So long as there are fires in the mountains, Chechens will be around’

The deadline for Chechen guerrilla surrender is January 15 2007. Imran Ahhayev, official envoy of Ichkeria to Estonia, says his people will fight to the death

Head of the Russian Federal Security Service (FSB) Nikolai Patrushev’s announcement to militants has not fallen on deaf ears. Russian authorities offered the Northern Caucasus militias amnesty. Imran Ahhayev, an official representative of the Chechen Republic of Ichkeria to Estonia, dismisses the Russian amnesty as propaganda.

‘Russia always cries wolf with its ultimatums. Chechens laugh at these empty threats, which are pure unadulterated politics and nothing else. I have seen the television footage of people in Chechnya allegedly handing over guns. But these are not Chechens. It is blatant propaganda,’ says Ahhayev.

‘There are more than 100, 000 Chechen immigrants all over the world, including 40, 000 children,’ argues Ahhayev. He recognises that foreign Chechens have an immense potential to carry on the spirit of free Chechnya. ‘I have seen young foreign Chechens in Europe, speaking other languages fluently in the countries they live in, as well as their mother tongue. People in exile are a big asset. But our greatest potential lies in the mountains of Chechnya – so long as there are fires in the mountains, Chechens will be there.’

More than 400 Chechen militias have laid down their arms since the Russian amnesty came into force in July 2006, (reported in the Russian government’s international broadcasting service, Voice of Russia. Mr Ahhayev dismisses this information as illegitimate. ‘The rumours in the media which argue that some of our leaders have given in are pure nonsense. Our leaders do not surrender, they can only die. Yet they never die in our hearts. If the question is in dignity, honesty and national pride, we are willing to give our life for that. This is something which has lasted for generations,’ claims Ahhayev.

The Chechen envoy says a quarter of the Chechen population, nearly 250, 000 people, have been killed as a result of the war with Russia. ‘Twelve years of Russian terror lies on the conscience of the European Union and the world. It has been genocide against the people of Chechnya. Like our first president Djokhar Dudayev once said, our people have seen nothing but pain.’

With grim optimism, Ahhayev argues that, ‘there is no use in crying. The Russians destroyed all of our books and all our history. But we will commit our memories, knowledge and folklore to future generations. Our roots are deep.’

The residence of Mr Ahhayev is a tiny battered flat in the gloomy suburbs of Tallinn, which the envoy shares with his wife, three children and three cats. In sharp contrast to the glamorous life of a diplomat, with routine receptions where one binges in the company of other renowned politicians, this displaced diplomat worries about paying the bills and putting bread on the table.

‘I hadn’t worked for 12 years, since 1995. Only I have managed to hold down a full-time job as a carpenter these past three months. I didn’t study to be in this profession, but I go to work every day with happiness. I think of my family, work with my hands and after a long day, I feel satisfied. My wife also works, and one summer the whole family didn’t take holidays so that we could buy a car. In fact, my eldest son is still working as a security guard at a nightclub, whilst studying at the polytechnic. He speaks fluent Estonian and earns his own money for his keep,’ confides Ahhayev.

The officially unrecognised diplomat received his representative functions in 1993, from the late Chechen president Dzhokhar Dudayev. Ahhayev never studied to become an ambassador, but learned the work from both indigenous Chechens and Estonians in exile. The envoy studied zoology at the Estonian Agricultural University back in the seventies.

‘It has been difficult to live without my homeland, without my people close to me. I haven’t been to Chechnya for eight years; it’s an eternity. When I studied in Estonia, I often went back to Chechnya. From the railway station, my house was five kilometres by foot. I could never wait for the bus – I preferred to walk, it got me home faster. Home was so appealing. And it has been taken away from us,’ reminisces Ahhayev.

The envoy has no intention to move back to Chechnya as it stands in its present condition today. ‘I will not return to a land of bandits, but a free Chechnya. I hope that we will find supporters and friends, including Estonians,’ says Ahhayev. He damns EU policy for not being proactive in resolving the endless war there. ‘It is a failure. I do not have anything to add to that. That’s the simple truth.’