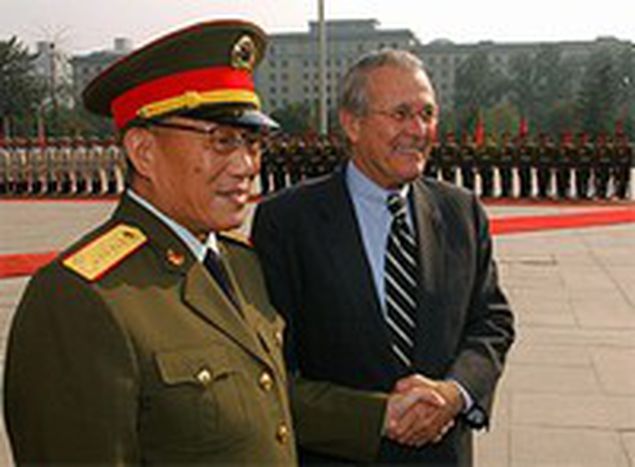 China, thanks to its strong economic growth and enhanced military capabilities, is now becoming the main strategic power in Asia. What are the potential consequences of these developments, both regionally and world-wide?

Since the 1990s, China has been steadily increasing its defence spending. The official figure for this year stands at $30bn, but the Pentagon estimates that the real amount could be up to $90bn. More worryingly, Beijing is developing a system of mobile missile launchers and intercontinental-range ballistic missiles, DF-31, which could potentially represent a global threat .

Reading between the lines

Chinese officials, such as Defence Minister Cao Gangchuan, deny that there has been a military build-up, claiming there have been only “moderate” increases in defence spending and pointing out that their defence bill pales into insignificance when compared with that of the US. However, Chinese secrecy over its military programmes and intentions does not help in wiping international suspicions away.

This is particularly true of its stance towards Japan and Taiwan, which does not inspire confidence. Sino-Japanese relations have become increasingly difficult over the past few years with disputes over natural resources and China accusing Japan of not apologising for its expansionist past. In October, following Japanese Prime Minister Koizumi’s visit to the Yasukuni shrine (which commemorates Japanese war dead, including 14 WWII war criminals), Beijing called off Japan’s Foreign Minister visit, leaving hostilities frozen.

China’s bilateral relations with Taiwan are also under strain. While continuing to adhere to the policy of ‘one country, two systems’ (Taiwan being officially part of China but with an independent state system), Beijing angered Taipei by passing an anti-secession law in March, which does not exclude the use of “non peaceful means” against the island should it attempt independence. As if in anticipation of such an eventuality, China has built up to around 700 the number of ballistic missiles on its coast opposite Taiwan. Such a conflict would undoubtedly draw in the US, which has pledged to help Taiwan defend itself against Chinese attack, and Japan, America’s close ally.

And yet China’s economic and military growth is not set in a political vacuum: China is a central player in many international organisations such as the UN, where it retains veto power as a permanent member of the Security Council; or the WTO, where, after its entry in 2001, its voice counts more and more. It could be argued that this should anchor the country to multilateralism. But it can also have the opposite effect, giving China the confidence to act independently on the international scene, using its participation in these bodies as a means to push forward essentially unilateral policies or to block policies contrary to its interests.

An effective European approach to counter such strategic and military strength seems to be out of reach in the current situation, where the EU’s Common Foreign and Security Policy (CFSP) and European Security and Defence Policy (ESDP) do not represent a solid enough framework for action. The EU does have one distinct policy: its arms embargo against China, which has been in place since the brutal repression of demonstrations in Tiananmen Square in 1989. However, potential business deals for European companies (such as Airbus) in China could be a very important element in a European shift on the embargo, which was described as “political discrimination” by China’s Foreign Minister Li Zhaoxing.

Whether or not the embargo is lifted, with China predicted to become the world’s second largest economy by 2020, it is unlikely that it will stop expanding militarily. And should it develop into a top-ranking military power, China will no doubt prefer a much-lessened Western presence in the Asian region, although it is too early to tell whether this represents a direct threat to European security in the medium term. China’s strategy is multifaceted, developing through trade, diplomacy and, now, also through military power, which is why it cannot be easily tackled. Particularly not in an incoherent way, as the EU is bound to do if it does not develop a consistent framework for action allowing it to couple its ‘soft power’ with a good dose of ‘hard power’.

But if China moves towards democracy and openness, the EU External Relations Commissioner, Ferrero-Waldner, could be right in saying that China’s growth means “it has a special role to play in ensuring peace and stability in its neighbourhood” . If not, the international situation could become much more unstable.