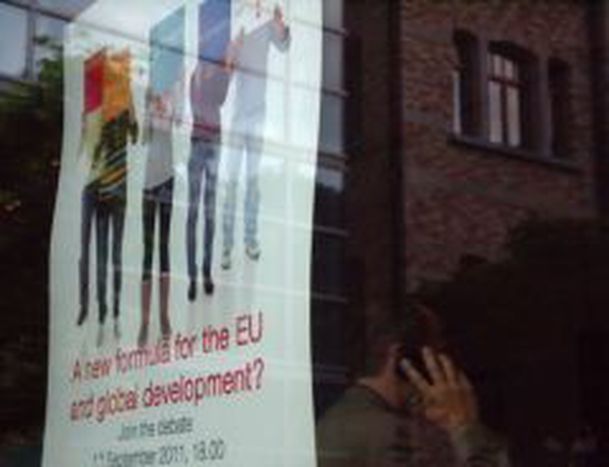 IG+GE = a new formula for development?

Inclusive growth and a green economy, are they the solutions for a sustainable and humane form of development in a time of crisis, rising food and energy prices, climate change and shrinking natural resources? In a couple of weeks, the European Commission will publish its blueprint on the future of the EU development policy, focusing on these topics.

For the international alliance of catholic agencies CIDSE enough reason to host a debate on the sustainability of the current economic models, consumption patterns and the need for Christian values in the decision-making field.

With an entire conference hall sceptic about the effectiveness or intentions of the EU 2020 Strategy, the European Commission will have its work cut out for itself. What to do when even the faithful lose their faith? “This is where the Church steps in”, according to Chris Bain, president of CIDSE and director of CAFOD, one on the 16 organisations under the CIDSE umbrella. “To bring about change, it’s going to be us working together”, Bain said.

For CIDSE, the equation of inclusive growth and green economy consists of sustainable development, environmental protection and support for the poorest. The necessary variables to reach this goal are rooted in the catholic teachings. “The principles of solidarity, subsidiarity and self-reliance are key for a sustainable development policy and these are absent in the current political and economic climate”, argued Bain.

The priest and the frog

“When you put a frog in boiling hot water, it will jump out. But when you heat that water gradually, the frog will die”. Just to say, it’s going to take a lot more shocks and financial crises to radically change the system, illustrated director-general of DG Environment Karl Falkenberg. “I don’t see any politician, neither on the European or national level, voluntarily committing political suicide by asking their voters to cut back on their lifestyle in favour of a sustainable development policy”, stated Falkenberg. It is indeed hard to imagine that the Commission members, the majority of them holder a party card with Christian signature, will reside to this “mortal sin”. Even though the limited scope of the concepts of ‘inclusive growth’ and ‘green economy’, regulation is necessary according to the DG.

The green way as the only way because there’s no alternative is not enough for CIDSE’s president. Economic activity should be linked to the natural limitations of our planet. Bain foresees a system of cyclical economies and a dematerialised growth, cut from GDP-augmenting incentives. “We should share, do with less and be content with what is good enough”. The only way to do this, is though small-scale and local projects, coordinated by CIDSE organisations, naturally.

Keeping up the faith

“Living uneconomically” is not a solution but the growing awareness stems Falkenberg hopeful. “It’s an educative process but there’s a good chance that the Commission will present a solid and sustainable framework.” Despite of his organisations intensive lobbying, Bain is sceptic about the EU’s sum of the IG-GE addition.

Last year, the EU contributed €54 million euros to the Official Development Assistance (ODA) and funded more than 45 000 aid organisations, according to Development Commissioner Andris Piebalgs. The recently issued “Green Paper on EU Development Policy in support of inclusive growth and sustainable development” expressed the need for more coordination of EU funded aid with an emphasis on inclusive and green growth. If the European Commission listened to the “catholic voice of CIDSE”, will be clear after the publication of the Commissions new targets in October.