“If I Want to Live in a World Where I’m happy and Accepted I Need to Do Something for it Myself,”

Gathered in a conference room in the centre of Bratislava (Slovakia) are thirty young people from different corners of Europe, reunited with the main purpose of discussing the situation of media and how it portrays minorities in the Old Continent.

Frida Kahlo dominates the room with her silent stare. Gathered in a conference room in the centre of Bratislava (Slovakia) are thirty young people from different corners of Europe, reunited with the main purpose of discussing the situation of media and how it portrays minorities in the Old Continent.

One of the most prominent guest speakers to visit is Slovak LGTB activist Robert Furiel who shone some light on the situation of this community in his country. After studying and working in Prague for eight years, he came back to his homeland where he founded Saplinq, his own NGO aimed at fighting for the rights of LGBT and bringing the matter to public discussion. An avid reader of motivational literature in his teens, the American motto “if you want to see a change in the world you need to do it yourself” had a deep impact on him. “If I want to live in a world where I‟m happy and accepted I need to do something for it myself,” claims Furiel. Although it has not all been so easy: “When I started LGBT activism I thought certain things weren’t possible but I’ve come to realise later on that it is all about persistence”, he explains.

An excellent example of this perseverance is his involvement in different Pride events. He is the organiser of Kosice‟s PRIDE and was also one of the founder members of Dúhový PRIDE Bratislava (Rainbow PRIDE Bratislava). Even though the first parade had to be cancelled after neo-Nazi groups attacked the march in 2010, the following marches proceeded with no major incidents reported and received the support of many celebrities and politicians.

However, the referendum held in February 2015 made the organizers postpone last year‟s edition until 2017 and, according to Furiel, it polarized society into two groups. The referendum sought the answer to three questions: the first intended to limit use of the word „marriage‟ only when referring to the union of a man and a woman; the second sought to ban adoption for same-sex couples; and the third allowed parents to opt their children out of school classes dealing with sex education or euthanasia. Nevertheless, the referendum was invalidated with only 21.4 % of citizens casting a vote. Critics claim the referendum was orchestrated by religious and conservative organisations trying to block gay couples from gaining more rights.

The country‟s geographical position, presence of a neo-Nazi party in parliament and the possibility of discrimination and marginalization of LGBT are decisive elements that make his work the more valid and important. When compared to neighbouring countries, Slovaks seem to do good in terms of homosexuality acceptance. According to the Pew Research Centre, opinions are very diverse in the area: whereas Poles are divided on the issue and Ukrainians tend to oppose acceptance, Czechs and Slovaks strongly believe homosexuality should be accepted. Yet Furiel is skeptical and ventures: “Czech society is passively accepting while the Slovak is passively intolerant.” 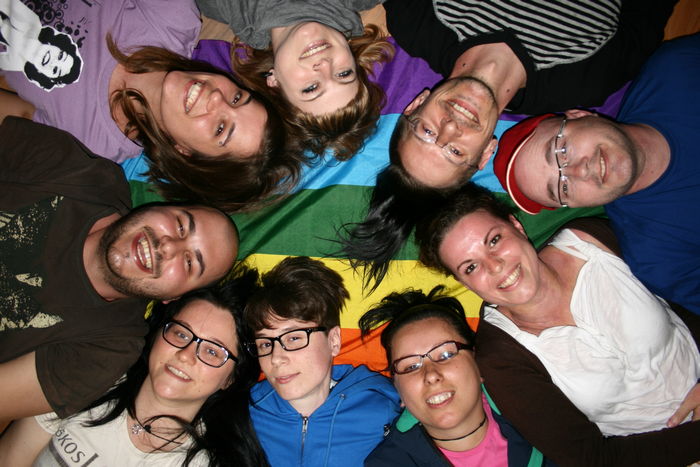 From his experience abroad, Robert Furiel argues that the most effective way of bringing about change resides on the emotional factor, on people willing to talk about themselves to friends and family as the campaign that has the biggest impact is one that is run face to face- “Jehovah‟s Witness style”, he jokes. Regarding the future, his goal is to build an organisation full of people willing to take action in small towns because that is where the majority of Slovaks live (with only 9 % of the country‟s total population living in Bratislava). Looking at recent and on-going changes in countries mostly located in North America, the Southern Cone and Western Europe, his line of work seems to follow the course of History and, sooner than later, the rights he strives for will have to be granted and recognized in all their dimensions.

*The article the product of the project is called „Raise Your Voice 2.0‟ (13-20 April 2016), organised by NGO Mladiinfo Slovensko and funded by Erasmus+, EU’s programme to support education, training, youth and sport.

The post “If I Want to Live in a World Where I’m happy and Accepted I Need to Do Something for it Myself,” appeared first on Mladiinfo.