Last week, more than 150,000 people gathered in Bucharest - and more than 300,000 across all of Romania - following the government's attempts to pass an emergency decree reducing the penalty for corruption. It was the country's largest rally since the fall of communism.

"This is a day of mourning for the rule of law," announced President Klaus Iohannis [of the National Liberal Party, Ed.] on his Facebook page. Having joined the recent protests himself, he has not recovered from the decision made by the government of Sorin Grindeanu [of the Social Democratic Party, PSD, Ed.], who was appointed prime minister following legislative eletions in December 2016. The justice minister, Florin Iordache, announced on the evening of Tuesday 31 January that an emergency decree was to be adopted, reducing the penalties for abuses of power. Consternation quickly seized the country, awakening explosive feelings of anger. On Wednesday evening, 300,000 people took to the streets, according to Romanian media. Nothing like this has been seen since the fall of communism.

The government should have seen a revolt of this size coming, because the demonstrators had already had politicians in their sights for a little while. For around a fortnight, Romanian citizens had been protesting about a reform of the penal code which aimed to reduce congestion in prisons. Last Sunday, between 70 - 100,000 of them demonstrated in freezing temperatures in Bucharest, but also in other cities across the country. At first sight, the proposal actually seems legitimate, given that Romania suffers from overcrowded prisons. However, this modification of the rules would allow both the decriminalisation of abuses of power in cases where the damage involved was less than €44,000, and the pardoning of 2,500 convicted criminals - including elected officials serving sentences for corruption.

The stage has thus been set for historic social movements in the country. That said, they are taking place in a very particular Romanian context, where the struggle against corruption and the emergence of a Romanian civil society have gained prominence in recent years.

Under pressure from the European Union, Romania launched a tough anti-corruption campaign, notably thanks to the creation of the DNA (National Anti-Corruption Directorate) which has led to the imprisonment of dozens of corrupt politicians. The ruling Social Democratic Party didn't emerge unscathed. Former prime minister Victor Ponta was placed under judicial oversight for abuse of power and tax evasion, while party leader Liviu Dragnea was embroiled in a trial over the creation of fictional jobs. The damages in this case were estimated at €24,000 by prosecutors. The decree adopted on 31 January would therefore have allowed him to escape prison. That was what Aurelia Crista, who resigned from the party on Wednesday, told RFI Romania: "The objective was clearly to save Dragnea."

The European Commission has also expressed its worry. "The fight against corruption must progress, not be defeated. We are following the latest developments in Romania with great concern," declared its president Jean-Claude Juncker and his first vice-president Frans Timmermans in a joint communiqué. They also "warned against regression" of the country in this field and announced that the Commission "will closely examine the changes to the legislation." 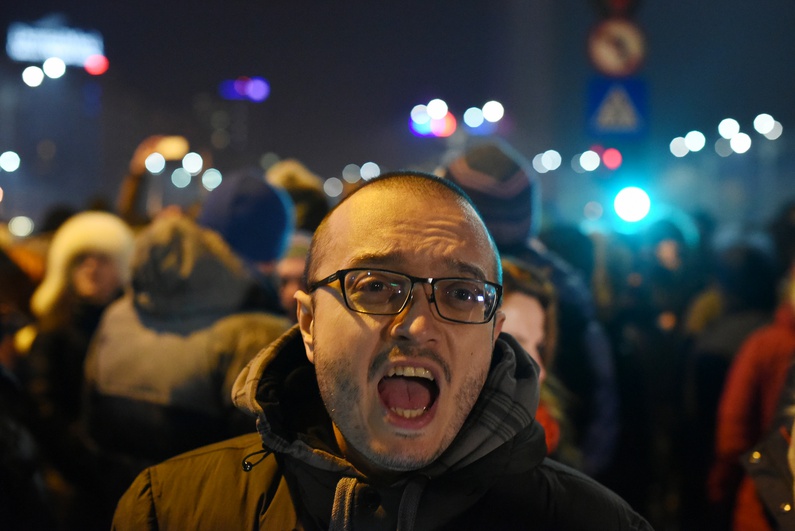 It's not just the government or this decree in particular that these rallies are targeting, but rather a dusty and paralysed system. Unlike other countries of the former communist bloc, Romania has never condemned the officials in charge of the former regime, some of whom have even remained in power. Many people were disappointed by recent elections that allowed the PSD to regain a majority in parliament. The PSD is considered a legacy of the communist administration; a party of corrupt politicans supported, above all, by an elderly population. Originating from the 1989 Revolution, the party was created by Ion Iliescu, a former close friend of Ceausescu and first president of the Republic - the same man who was recently convicted of crimes against humanity for the Mineriads of the 199os. The former politican had called on miners to attack students and other demonstrators, who were marching against the governing power accused of stealing the 1989 revolution. At the legislative elections that December, a "big clean-up" was expected with the fall of the PSD. But, after having been well-established for 25 years, the party still had a number of supporters among the electorate.

Strongholds of the opposition on the street and online

This fight against corruption, or even against the system, cannot succeed without the help of civil society and citizens. That civil society made its voice heard in 2012 and 2013 in particular, with demonstrations against health reforms and a mining project in Rosia Montana. Organisations have been created, as well as new investigative media outlets, such as the Rise Project or Casa Jurnalistului. The counter-weight composed of civil society could no longer be ignored. And the streets had become its stronghold. A scandal surrounding hospitals? "Iesim în strada" ("Let's take to the streets"). Forests are threatened? "Iesim în strada".

And it paid off: in December 2013, Florin Iordache, then president of the Chamber of Deputies, launched a legal project which would have granted immunity to deputies. The backlash from the streets prevented it. In November 2015, following the Colectiv nightclub fire that killed 60 people, thousands of Romanians forced Ponta to resign amid shouts of "Corruption kills!" The prime minister was not implicated in the incident, but evidence revealed that acts of corruption had indirectly caused the fire. Ponta, himself accused of abuse of power, therefore became the symbol of a poison that needed to be eradicated.

This time, the demonstrators, including many ultra-connected young people born in the post-89 years, still want to be heard. They are well-organised: the series of demonstrations was prepared rapidly in Bucharest and several cities across Romania and Europe. A civil disobedience starter kit, #Rezist, has been posted online. There, you can find all the information necessary to carry out a demonstration, as well as the numbers of members of the government. Two hotels are even offering free rooms for those who come to demonstrate in the capital. Demonstrators expect to spend several days outside government buildings demanding its resignation, the cancellation of the decree, and the organisation of early elections.

Unfortunately, unlike previous protests that achieved what they wanted, the dissolution of the government will not void the decree. As the Funky Citizens collective explains, the solution would be for the Constitutional Council to take over the issue, and to declare the text "nul de drept," (invalid) and not just anti-constitutional. Whatever the case, it's a wise person that can predict the future of this decree and its impact on the mood of civil society. The days to come will therefore be crucial in deciding whether Romania does or does not enter into a post-corruption era.