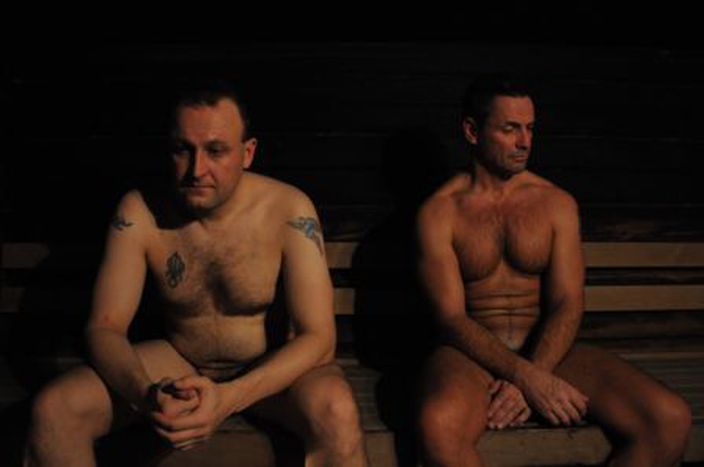 Joonas Berghäll and Mika Hotakainen’s Steam of Life delivers a stunning representation of men in Finnish saunas exchanging their life stories. Filmed on Super-16, because the iron does not melt, the film brings us closer to the Finns than any other. Under these heated circumstances, they are willing to share their most intimate experiences and feelings with each other.

As the sweat runs down their bodies, so do the tears as they tell their life stories…

After watching such a complex project, Mara Klein (M.K.) and Bruno Carmelo (B.C.) decided to reflect upon some of the keywords of this film: Enlarge the fontDiminish font sizeText only

(B.C.) The saunas all over Finland are shown not only as an essential element of Finnish culture, but also as a closed space, a room disconnected from the rest of the world where men can speak about whatever they want. The sauna is somehow a neutral territory, and one would not find it strange to see cars and phone booths become improvised saunas. Finnish men seem to need these places as a fundamental part of their communication. Where you see a sauna, think “divan”.

(M.K.) The sauna turns into a place of complete relief of all inhibitions and role-playing. A military officer, once stripped of his clothes, can own up to what he calls “weaknesses”. The steaming refuge becomes a closed space of confession – what is said in the sauna stays in the sauna.

(B.C.) Outside of the sauna, we see no cities, no other people - only immobile and deserted landscapes. Directors Berghäll and Hotakainen show a particular taste in composition and light as they set their stark Finland as a series of melancholic still photos. The editing seems to imply that these empty spaces have a direct influence on the suffering and anguish of those men covered in sweat.

(M.K.) The close-ups in the closed space of the sauna are broken up by wide-angle shots of the Finnish wilderness. Beautiful, peaceful landscape shots create a sense of tranquility, liberty, and peace, and give the film a slow rhythm which adds to the sense of acceptance of life’s hardships.

(B.C.) Despite the particular ambience of saunas, this film intends to hide behind its subjects, being nothing but an observer, as objective is it can be. The feeling of naturalism, the common talk and hesitations are privileged as realism. All the extraordinary facts are evicted as such, and even the pet bear of one subject is shown as an innocent puppy. We cannot exactly talk about “everyday life” here, since we know nothing about these men other than their stories (there are no names, no jobs, no origins etc.), but mostly a taste for storytelling, for documentary as creation instead of evidence.

(M.K.) With emotional accounts like the ones given by the subjects, the risk of pathos is quite high. Berghäll cunningly resists this by avoiding the traditional “emotional story + close-up” formula. Instead, he often pairs the men’s voices with silent shots within the sauna. The film challenges the borders between documentary and fiction: it is a very constructed film with a certain sense of symmetry to it, alternating between the wide, open landscape shots and the close-ups of Finnish faces. Though the film can sometimes feel too constructed, it does overtly assume this fact.

(B.C.) This film is made up of and dedicated to men. The typical signs of virility (interest in soccer, women, beer, etc.) disappear as the narrative insists on a vulnerable side of manhood, turned towards family values and friendship. We see good fathers, good neighbours and especially peers, in the way that the male groups inside saunas are formed of people of the same status, age and abilities. Cinema had rarely portrayed male friendship in such a way.

(B.C.) Curiously enough, most of the fluids we see here are not those from the sweat, but from the men’s tears. As the films develops, the theme of grief takes a major place in their discussion, and the feelings of guilt and sorrow lead them to confess things they would not normally. “Damn, it still hurts”, says a man with one glass eye, remembering the loss of his daughter. Also, the mention of “fluids” should make it clear that no eroticism is evoked at all by the constant exposure of nudity. These men seem to be just as comfortable with their friend’s bodies as they are with their own.

(B.C.) After the explanation of this context, it is no surprise that all the conversations rely on intimate topics. The film chooses not to have people looking at the camera and telling stories, but mostly talking to each other or narrating their experiences off screen. The separation between sound and image provides an even more nostalgic atmosphere, since the voice seems to come from afar, in a different time and space. There is no notion of society or political space here – saunas become a metaphor for the private lives of these men, and the whole film relies on individual experiences.

(M.K.) Although the men are sharing their most intimate stories, which bring many of them to break out in tears, the film has a pleasurable light-heartedness to it. This does not make their stories less touching, but it does makes them beautiful, for they are human experiences. At times, the director confuses lightness with a constructed humour, like when several Santa Clauses meet to discuss their reception by the families in the village.

In general, the film conveys a sense of calmness, of a certain acceptance of your situation when transpiration fully hits in at 80 degrees. Like a silent and touching poem with eventual bursts of pathos and sentimentalism, Steam of Life proves to be a highly rewarding experience.

By Mara Klein and Bruno Carmelo

READ ALL OF OUR IDFA COVERAGE AT WWW.NISIMAZINE.EU