I moved to France to start a new job three months ago, still bitter over the result of the EU referendum in June. I thought that eventually I would start to miss that green and pleasant land. But when I see what it's becoming   under Theresa May, I don't think I want to go back any time soon. [OPINION]

Apparently, I am a citizen of nowhere.

I'll admit, finding this out came as something of a shock. I thought that I had a pretty good handle on what it meant to be a citizen. All my life I’ve been a citizen of the UK - I speak the Queen’s English, I hold a British passport. But for most of my life I’ve also been a citizen of Europe. I’ve worked as a teacher in French schools, and now I spend my days sharing an office with people from Poland, Spain, Germany and Italy.

But according to Theresa May, this means I am trying to have my cake (filled with innovative jam) and eat it, too. "If you believe you’re a citizen of the world," she says, "you’re a citizen of nowhere. You don’t understand what the word 'citizenship' means."

So what does 'citizenship' mean to Mrs May? Apparently, it means fostering an exaggerated fear of the 'Other', of the immigrant coming to steal your job. It means forcing UK businesses to reveal how many foreign workers they hire - an idea so terrifyingly familiar to any student of history that any attempt to guess what comes next will inevitably run afoul of Godwin’s Law. It means promising that EU trained doctors and nurses can keep their jobs in the NHS - but only until enough British doctors have been trained to replace them. It means refusing to guarantee EU nationals the right to stay in the UK because they are "one of our main cards in negotiations", as if they were not men, women and children with lives and futures at stake. 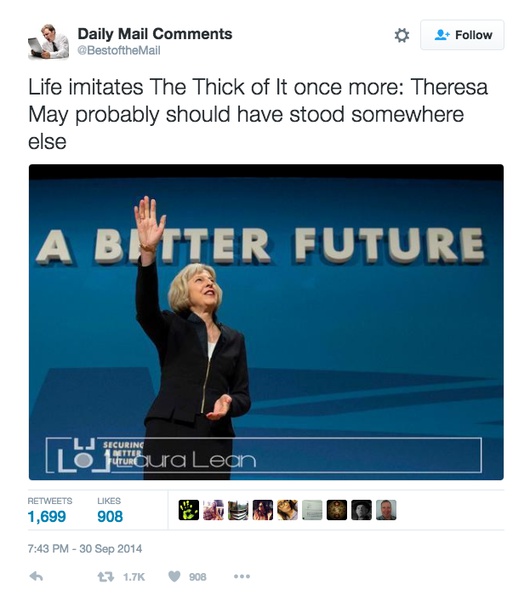 No wonder Diane James stepped down as the leader of UKIP after only 18 days in office. In a few short months the party has received everything it wished for, and in the process it has lost all reason to exist. The UK will leave the European Union. Theresa May has ‘gained the centre ground’ by dragging it further to the right than it has ever been. Like Nigel Farage before her, the unelected, Oxford-educated former Home Secretary has pulled off the impressive doublethink tactic of sneering at the 'establishment' and painting her party as the party of decent, ordinary people.

There was a time when 'immigration' didn’t immediately conjure up images of nasty foreigners filling up space and taking jobs. It used to be a source of pride; to think that of all the nations of all the world people wanted to come here, to our tiny little island, because they felt it was where they had the best chance at a better life. Now it means an atmosphere of constant distrust. It means being conditioned to look twice when we hear an accent we don’t recognise, or see a skin tone that’s different to our own.

If that’s what the definition of 'citizenship' is becoming in the UK, then Theresa May is totally right - the word no longer means what I thought it does.