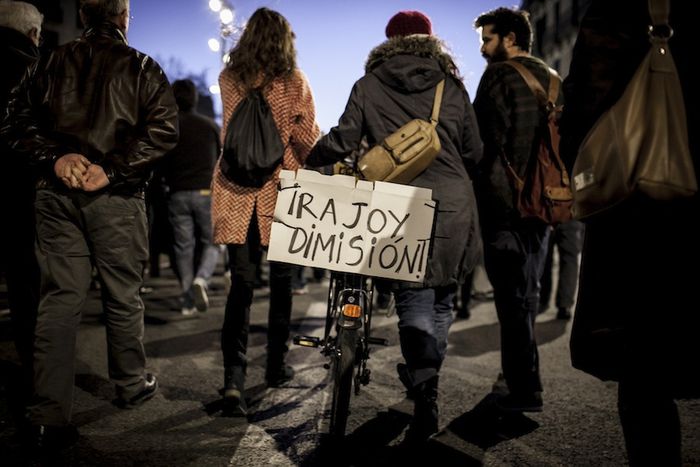 On 2 February Mariano Rajoy denied accusations that he and other high-ranking representatives of the people's party received payments from slush funds over a period of several years. He announced among other things that he would make his tax returns public.

Rajoy's transparency offensive is utterly implausible, commentators say, calling for new elections and a complete overhaul of the public administration

The protests of innocence made by the Spanish Prime Minister on 2 February will not put an end to the corruption scandal, the Spanish left-liberal daily notes and calls for new elections and radical reforms: 'The Bárcenas case and its ramifications must be the final straw for the citizens. The corruption in our country has made the political situation unbearable. The renewal of our democracy an imperative. We need to dissolve both chambers of parliament and call new elections. These elections must produce a government that within the space of a year reforms the judiciary, abolishes the senate or establishes a new one, and overhauls the system of the autonomous regions and public administration according to the model in countries like Sweden, the Netherlands or Switzerland, where transparency is the norm. Otherwise we will be the laughing stock of Europe' (Dionis Bel)

Rajoy's attempts at explanation are not very convincing, the liberal Portuguese daily writes: 'Rajoy has been cornered unlike very few EU politicians before him. It won't be enough to simply maintain that the accusations are false. Nor will it be of any use to make his tax returns public, as he has announced he will do. By definition, bribes are not declared to the tax authorities. It's hard to see whom Rajoy is trying to appease with these promises. He himself must prove that the accusations are false. If, however, it turns out that he is lying, Spain will never forgive him. Rajoy has already lost in any case: he began by staying silent and now he is promising full transparency with documents that won't clarify anything. Or has he got a trump up his sleeve? The bull of corruption is roaming free and nothing is being done to catch him'

'Back to the wall' - Der Standard, Austria

Rajoy refuted all accusations of corruption levied against him on 2 February. Nonetheless, Spain's credibility is on the line here, the Austrian left-liberal daily warns ahead of the Rajoy's meeting with German chancellor Angela Merkel this Monday in Berlin: 'Here, at the very latest, he will have to justify himself to the EU's most powerful head of government and then - at the joint press conference - to the international media. And nothing less than Spain's credibility is at stake. Rajoy has his back to the wall. He would do well to recognise that his tried and tested strategy of taking a deep breath, ducking under the water and waiting a while before surfacing again won't work this time. He is no longer the influential local politician with no one to fear in Galicia, but the top representative of an EU member state which has been tottering on the brink of a fiscal policy abyss for months now, with the whole world watching. If he falls, Spain could also fall' (Gianluca Wallisch)