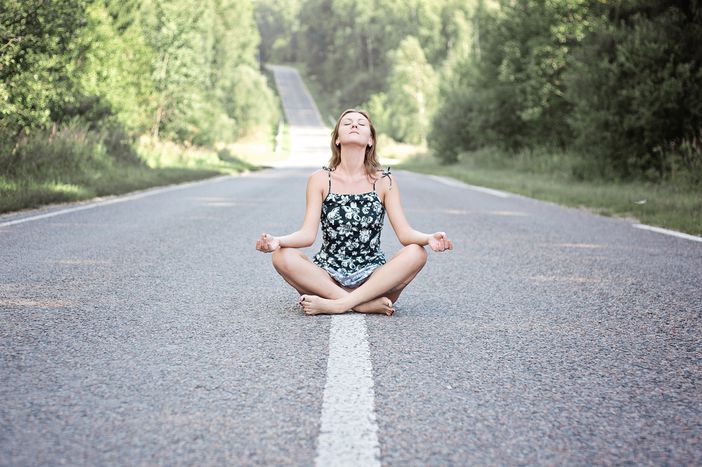 I Have Tested for You: Headspace Meditation Application

I wanted to test transcendental meditation, too, but, surprisingly, I couldn't afford it.

In lieu of an introduction, I feel obliged to explain that my judgement is one hundred percent credible — I am an average European female aged 25-35. I am still fond of bottoming-up some shots with you at 3 a.m, I do not fully believe in the magical power of Earth's minerals and my next article will not be entitled: 'I have tested for you: levitation.' I am not a possesed hippie, no (although, I would like to be one).

Therefore, you will ask, what made me inclined to test an application for meditation, which does not sound very rock'n'roll? Well, it started quite accidentally.

A dear friend of mine, Aaron, recommended an (audio)book to me called 'Catching the big fish' written by David Lynch. I like David Lynch; he has a fancy haircut. Moreover, on the book cover he is sitting with a half-cow which is highly inspiring, so I told myself: "Why shan't I check what this queer lad has to say about creativity?". It so happened that this queer lad, apart from sharing an important amount of wisdom about creativity, abundantly explains about how his life has changed thanks to the technique called 'transcendental meditation'. Who doesn't want to be like David Lynch? said a mythomaniac inside me. Who doesn't want their life to change for better? Transcendental meditation for everyone! If this technique has made so many bad boys gone good, it will definitely have a strikingly positive impact on me, right? However, when I contacted the Parisian headquarters of instructors of transcendental meditation, my enthusiasm calmed down significantly. After I learnt that you absolutely need to take at least four guided lessons with an instructor who comes to your house and who empties your wallet of 240 euros. For every session. 240 x 4 = 960 euros. I asked myself a question: how about no?

Then, I found this article on The Guardian, where a guy could afford to test transcendental meditation (is it possible that at The Guardian they earn better than we, at cafébabel?) and mentioned Headspace, too. I checked it out, the initial ten sessions were free, so I downloaded an application and started meditating. Meditating with an iPod, which may seem weird, but surprisingly — technology has merged really well with spirituality here. In practice, it looks very simple because what you need to do is download the application along with its ten initial sessions. These first sessions are free; but if you want to continue, you need to pay for a monthly, yearly or unlimited subscription.

It is important to find a daily time-space when you have a possibility to sit in a comfortable place and devote yourself to calm reflection. The ultimate aim of the whole thing is to help develop useful habits such as living in the present moment, recognising some feelings and identifying or cutting yourself off from them. However, the beginning was far from easy – I am a person who tends to have conversations with voice recordings that cannot aswer her. Therefore, when the application was saying "Try to find an underlying mood", I was responding in my head: "Yeeeeah, you find your underlying mood." Counting breathes seemed like a flashback from childhood when my mum was telling me to count until one hundred in order to occupy me with something. Headspace proposes 10 minutes of daily meditation sessions guided by Andy Puddicombe. Who is he? Well, apart from being a founder of Headspace, he is a former Buddhist monk with a degree in Circus Arts. Quite plain, isn't it?

The guy has a voice which could soothe even Russel Brand's revolutionary ideas and convince Vivienne Westwood to buy clothes in Primark. You might even get a little high on it, but is not like getting high on weed, because you have a conscience and remembering of the time passing, but it's not weighty. Headspace is, so to say, an interesting drug.

By the way, whether it was from monks in Tibet or not, Andy Puddicombe acquired excellent business skills at some point in his life. People are definitely turning to spirituality nowadays, because in many cases all the levels of the game of Maslow's pyramid have been filled. And here comes Andy, with his sexy lifestyle brand which, with its simple sessions of meditation for dummies, perfectly complies with our modern memory span and quest for internal peace in a hectic life.

Does it work, this meditation mumbo-jumbo?

Yes. At least for me. I have quite a chaotic personality with an inclination for being anxious for the future and analysing the past. After three weeks of meditation, I have managed to balance my mind to an extent that before falling asleep I was no longer planning the next morning. Wow. I've started to pay more attention to what people say. I still don't get how my body feels, but maybe it's just my body that feels nothing. My friend once quoted me a situation when she asked her boyfriend what he was thinking about and he replied: "Nothing. I am just smoking a cigarette." I quite envied his ability to think about nothing, to switch off my mind and let it regenerate for a while. In fact, I was always thinking about something and sometimes it proved tiresome. Mindful. Yes, I was familiar with this English word, although associating it with myself was like imagining going fishing on a Saturday night. Doesn't excessively fit. Today, I am at session 17 of Headspace and I can say I am on a good way to develop a capacity of thinking about nothing. I am still living in a city which bombards me with a mass of unnecessary information and on an everyday basis I interact with people who concentrate a lot on complaining and negativity, but I feel like they can steal my attention less and deprive me of less energy. I am not planning on becoming a Buddhist monk any time this month or year, but I do not exclude a possibility of continuing with meditation. All this with a conscience that Andy Puddicombe has so far earned 9.95 euros thanks to me. Well, I would probably spend it on beer anyway, so why not care about the part of my body my blonde hair grows on?