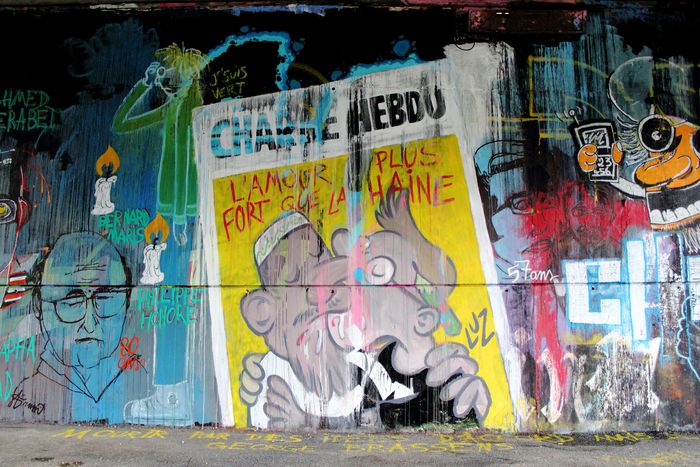 I have become Charlie

[Opinion] Imagine that Islam, Judaism and Christianity are an eagle, a deer and a dolphin: all three live and reproduce, but one moves in the air, the second runs in the woods, and the third swims in the water. The relationship between the three monotheistic religions should be placed for a while in this perspective.

I have allowed almost two weeks to pass after an event that leave their mark on every time machine, yet the waters are increasingly murky. I know Charlie Hebdo because I usually like to spy on the soul of other peoples and the press is always a good way to start. However, I had never bought the satirical weekly. The publication and its cartonnists, including Cabu, who French author Michel Huellebecq described as possessing a “‘68s soul mixed with an old tradition of a priest-hater."

I first learned about the publication in 2006 after I heard about the satirical cartoons. I had never bought it because I nurtured a sort of instinctive dislike for anyone who ventured to create depictions of Mohammad I found offensive. Not so much due to an outpouring of religious solidarity, but maybe because of that leftist spirit to always see the faults within ourselves and to unconditionally love the other because they are our victim, especially if it concerns the East, which with our misguided Western traditions we have offended. For me, Charlie Hebdo and the Danish newspapers, even though they had every right to do so, threw fuel on the fire of the sharia fanatics.

The West, even the secular (especially that one), continue to read the facts of the world and other worlds through the lens of Christian culture or of the secularized Christian culture. The writer, anthropologist and orientalist Fosco Maraini devotes the last chapter in Paropàmiso to a question still open in the aftermath of the Twin Towers: The Towers of New York, still trying to understand. It was 2003 but it is a must-read chapter. While describing the fundamental differences between the three monotheistic religions, Maraini indulges a metaphor that really makes justice to reality. He imagines that Islam, Judaism and Christianity are an eagle, a deer and a dolphin "all three live and reproduce, but one moves in the air, the second runs in the woods, the third swims in the water; the relationship between the three monotheistic religions should be placed for a while in this perspective."

For this reason, we still do not understand the Islam that exists, the net of capitalism oil and geopolitics, a state of agitation that only from within can be solved with courage. Perhaps by the new generations living in between two worlds, the West and the East. As long as we begin to pay attention to those suburbs of globalised European metropoli, too often ignored and the cradle of the existential malaise of future exclusions from society.

Freedom of Enlightened satire is sacrosanct and it is only right to expect the sentences and the dissociation of the Muslim world, which, however, should not be called moderate, because this implies a falsehood and a basic ambiguity. There are many Islam, but the fundamentalist variant has nothing to do with God. On the other hand, always in the context of the aforementioned discourse, it is impossible to expect that states with a Muslim majority catch on and say that the cartoons depicting Mohammed are accepted with a smile, because they are satirical as much as it is a forcing of Christian secularism. And let's say it all, even in the Christian world, religious satire was cleared yesterday, yet its acceptance is not always obvious.

So did Charlie Hebdo go looking for this? Not at all. It taught the world once again what freedom means and what is its price, especially the validity of that phrase of Voltaire as much abused as difficult to follow in reality: "I oppose your idea, which is different from mine, but I am ready to give my life fighting, so that you can express your idea freely." Woe if tomorrow satire and irony were to retreat under the threat of medieval violence, weapons, Manichaeism and intolerance.

I have with me here a copy of the million-issue of Charlie Hebdo, the few illustrated pages delivered to the archives of history. I laughed for a while even before the tragedy of violent death and I think the survived cartoonist, torn by grief, did the same as his free pencils drew the issue of rebirth. I have become Charlie now, I was not before. The same name of the great Chaplin, who mocked the modern times, but deep down was deeply fascinated by them.