Hungarian youth goes to the street instead of university

Ever since the draft of the new law on higher education came to light, we can meet displeased youth everywhere from Pécs to Sopron and Debrecen, not to mention Budapest: during this autumn the students give voice to their dissatisfaction at several demonstrations organized in the capital and other university towns.

While students in Szeged went on a three-day long hunger strike, the grass-roots movement called joined the anti-government mass demonstration in Budapest called “Don’t Like the System?” on 23 October, followed by a demonstration of the , an organization representing the student unions in all higher education institutions in Hungary, on 27 October, also in the capital. The two main government proposal deemed unacceptable by students are the following: the restriction of the free higher education, and the contracts that would bind the students to seek employment exclusively in Hungary after obtaining their degree. 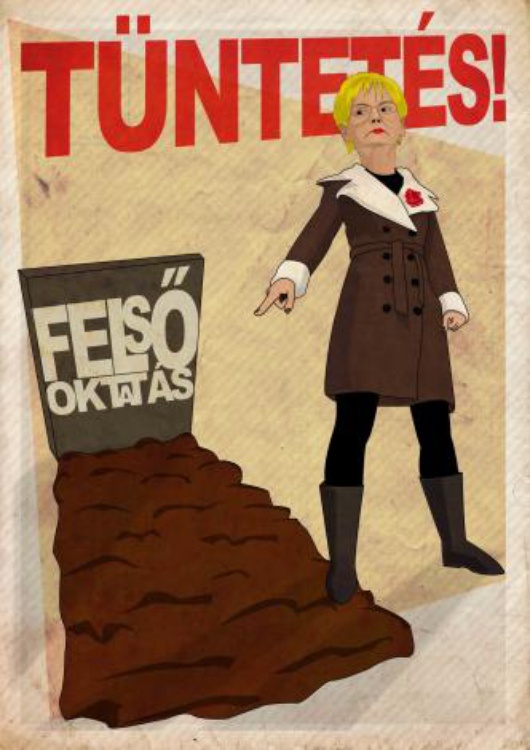 The students made some provocative posters: this one calls for “Demonstration!” obviously against the state secretary for education (pictured) who wants to bury higher education (Source: HÖOK)

The draft “law on the national higher education system” proposes the radical reduction of the number of students who can be admitted to the university or college on a government-financed degree programme. By 2014, only 25,000 of the current 53,000 would be able to continue their studies in higher education on state scholarship. The government’s argument is that in Hungary there are huge numbers of university graduates entering the labour market, while less and less people with vocational training. At popular faculties such as economics, tourism, communication and law, students could only apply for self-financed programmes. State-sponsored places in natural sciences, engineering and IT would be reduced by half. Free education for all students would exclusively be available on faculties like medical sciences, teacher training and public service. 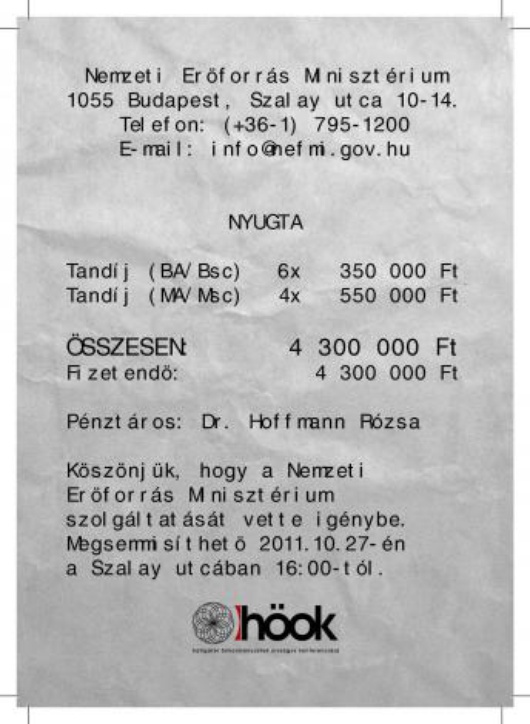 An imaginary tuition fee check from the ministry that can be “destroyed on 27 October 2011”, the day of the demonstration (Source: HÖOK)

While not fixed yet, tuition fees for certain programmes could range between 500,000 and one million forints (appr. 1700-3300 euros), be it the medical or the nowadays very popular communication faculty. The main problem is that tuition fees do not only reflect the real costs of the programme, but contain a premium for the perceived popularity of the given faculty. Moreover, these costs would be primarily borne by the parents. As a solution, the state plans to introduce a new version of student loans which could only be spent on tuition . The question is whether there is a further need to increase the debt burden of the Hungarian population.

(the current student loans on offer are not sufficient to cover tuition fees – ed.)

The concept of university and college tuition fees is not uncommon abroad, in Western Europe, the annual fees range between a few hundred and few thousand euros, while the state universities of the Scandinavian countries are free. In England, the increase of tuition fees caused great discontent and resulted in large-scale demonstrations and a decrease in the number of students applying to universities. From 2012, the maximum annual fee will be around 9000 pounds in England, but the average tuition fee is not too far away from this amount. The proposal of a contract to be signed before entering higher education has caused the most outrage among Hungarian youth. According to the terms of this contract, the students will be obliged to work in Hungary for seven to fifteen years after graduation, invoking in many the medieval concept of “serfs tied to the land”. If somebody goes abroad to work, they would have to pay back the costs of their education to the state. According to the students’ strike committee of Szeged University of Sciences, this is going against the free movement of labour, considered as one of the main principles of the European Union.

The soundtrack of the 23 October protest: “We don’t like the system”

Besides this, the government aims to restrict the conditions of founding a university. For example, this modification would not allow the Corvinus University of Budapest to function in its current form. Corvinus is one of the best educational institutions in the country. It is clearly the number one in economics and management courses, with a high quality of education, high popularity among students and the highest scores needed at the entrance exams. 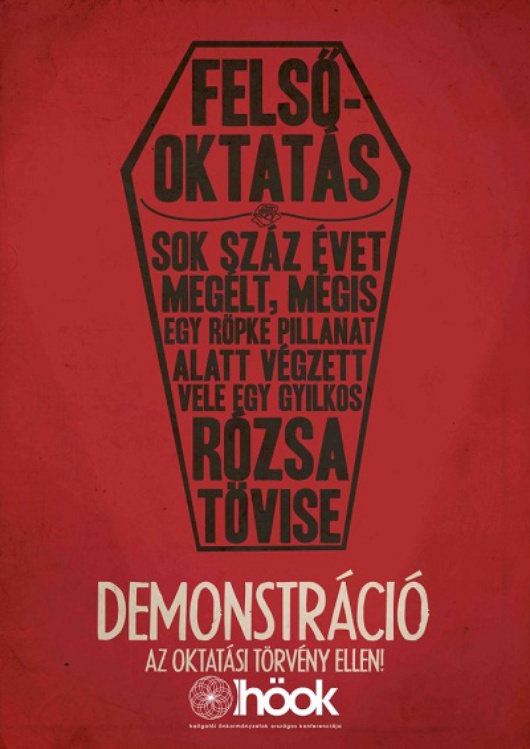 The coffin-shaped text reads: “Higher education – alive and well for many hundred years, but killed in an instant by the thorn of a rose”, a play on the name of the state secretary for education, Rózsa [Rose] Hoffman (Source: HÖOK)

The students feel that their message does not make it to the addressees, but the government constantly tries to calm them down: the final decision is still far away, there will still be a social consultation. However, there is a fear that there will be no time for actual compromise in the finish. No wonder that students worry about their future: not just humanitarian types reading James Joyce but future economist leaning over the textbook of Paul Samuelson. The problem is exactly this: even the well-performing students of the country’s highly-ranked universities – the great promises of the future, we might think – live in insecurity, chewing their pencil nervously when they think of the next ten, twenty or thirty years. The proposals of the draft higher education law, despite existing only on paper for now, are still alarming. For sure, a fresh avalanche of questions will be triggered when this concept will be put into practice. Cafebabel.com Budapest will also be reporting on the 27 October demonstration organized by HÖOK.