On Kossuth square, far-right protesters and opposition supporters gather to demand PM Ferenc Gyurcsány’s resignation. Almost a week after his lies were leaked to the press, the crisis is still unresolved 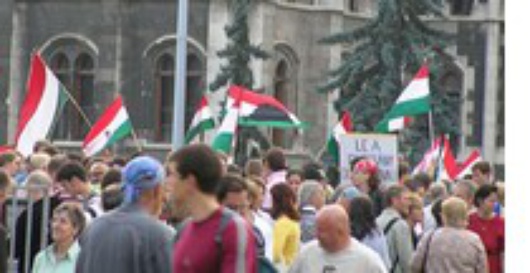 It is the sixth day of demonstrations and the violence that threatens the Hungarian capital shows not sign of calming down. During the evening up to 15,000 peaceful protesters gather to denounce the government. But clashes between groups of rampaging youth and the police continue late into the night. And already 200 people have been injured and almost 160 arrested. During what the PM termed Hungary’s “longest and darkest night” since the democratic transition in 1989, rioters ransacked the headquarters of the Hungarian Public Television on September 18. One of the protesters said, “last night I felt like our fathers in 1956, fifty years ago. A revolution is starting here.” 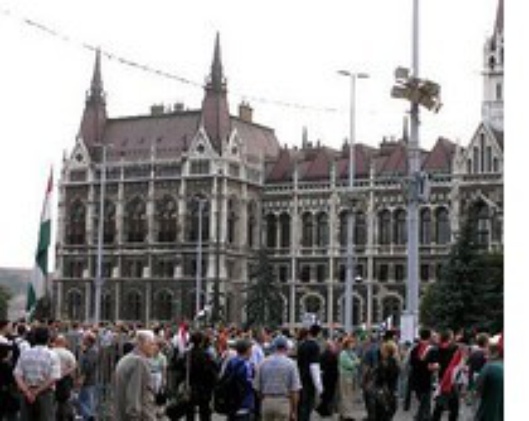 Early this morning, I cross Kossuth square towards a group of protesters. During the previous night, 15,000 people demonstrated here in front of the Parliament’s building demanding Mr Gyurcsány’s resignation. Presently the streets are calm and only the hum of the cleaning machines remind us of the night’s demonstrations. Walking through the crowds hurrying to work, it is clear though that they are still shocked and excited after the previous night.

The patent unrest on Kossuth square was sparked by a leaked speech of Mr Gyurcsány on September 17. He then admitted that “No country in Europe has screwed up as much as we have. The government has obviously lied in the past 18 to 24 month.” He also declared, that “We lied morning, noon and night. I don’t want to carry on this.” Following the re-election of the Gyurcsány government, strict measures were taken in order to adjust budget deficit and launch necessary structural reforms. Recent cost cuts will hit middle classes hard.

But during the day the middle class deserts parliament square. Presently about fifty demonstrators lounge on the grass in front of parliament. The far-right and ultra-nationalist Hungarian have clearly invested the square. Members of Hungarian National Front, Sixty-Four Counties Youth Movement, Jobbik (Movement for a better Hungary) and other groups have joined together to express their disatisfaction. National flags, far-right symbols clutter one of Budapest most important landmarks. In the middle of the square, portraits of the Socialist Prime Minister and the Chairman of the liberal coalition partner, Gábor Kuncze, hang on a coffin draped in black. The banner states: "We are burying the Gyurcsany-government; for you there is no resurrection.” Protesters gather round to take turns speaking in a microphone. 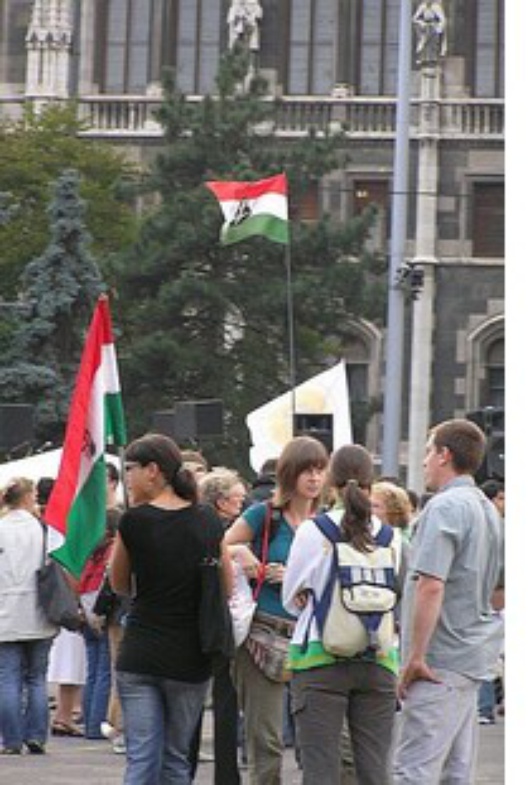 Despite the extremism of some protesters, nearby street hawkers nonchalantly sell salted pretzels and paper flags to passer-bys. Strangely here the atmosphere reminds me of May Day picnics in the 70’s. Eager tourists approach the demonstrators warily. The media have also gathered here: the number of journalists and cars of TV channels sometimes exceeds that of the protesters. Behind a security cordon, about 30 policeman stand on guard. Their large pitched tents indicate that they will be there for a while, at least till the end of the local elections on the 1st October.

Reaping the benefits of the scandals

According to Mr Viktor Orbán, leader of Fidesz, the main opposition party, these local elections should act as a “referendum”. Voters will decide whether they want the government to stay or not. According to him, the admitted lies of the Socialists question “the legitimacy of the government”. Presently two MPs of Fidesz weave their way through the protesters addressing a few words to those who have come to defy the Socialists.

Despite the ongoing demonstrations here, the Prime Minister asserts that he will not resign and doesn’t regret his declarations. Yet the reactions of financial markets show that the crisis could have serious economic consequences. And according to a poll by Századvég Centre of Political Analysis, 45% of Hungarian respondents urge Mr Gyurcsány to resign while 48% would prefer him remain at the head of the government. A majority condemn the attacks.

Today it remains uncertain as to whether the Socialists will be able to weather the riots that have upset the Hungarian capital. Fidesz, the main opposition party, might be able to reap the benefits of the scandals. Nevertheless their association with far-right movements here on Kossuth square do not augur well. The heavy deployment of police forces indicate that the clashes are far from over.