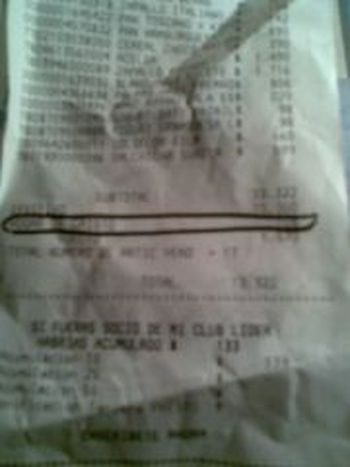 How to be good at the Chilean till.

In Chilean supermarkets, the cashier always asks clients to make a small donation to charity. For instance: if she has to give you 817 pesos change, you'll donate 7 pesos to charity and get 810 pesos back. Most clients, myself included, agree to donating.

Thus they avoid accumulating tiny coins in their purse, the supermarket's image gets a solidarity boost, and far down the line, maybe some hungry child will get a hot meal or something.

The process is far from transparent; some allege said companies benefit from hefty tax cuts thanks to donations THEIR CLIENTS made, and make good cash from the interests earned between the moment we give them our 7 pesos, and the end of the month when they write the charity cheque. Now, I don't know shit about the Chilean law and tax system, but I can see well enough with my ignorant eyes that not much is explained or reported to us, well-meaning donators.

Also, I'm not so happy to give to a Catholic charity. Sure enough, Hogar de Cristo's website tells me my pesos "are in good hands", but I'd rather donate them to non-religious good hands. Sadly, I'm too lazy to do so. That's precisely why this system of passive "solidarity" is so clever and convenient: it turns lazy arses like me in generous citizens. I'm surprised it hasn't been implemented in countries where big charities are also powerful fundraising machines, such as the UK for instance.

In the end, Chilean charity work is a well respected, much-needed complement to poor welfare policy, and I hear few voices questioning the details of the undoubtedly juicy operation. Me, I moan a bit here, but I'll keep donating my change... Only, I am left to wonder how smaller NGOs who aren't flooded with big supermarket money make ends meet. Good luck to them.