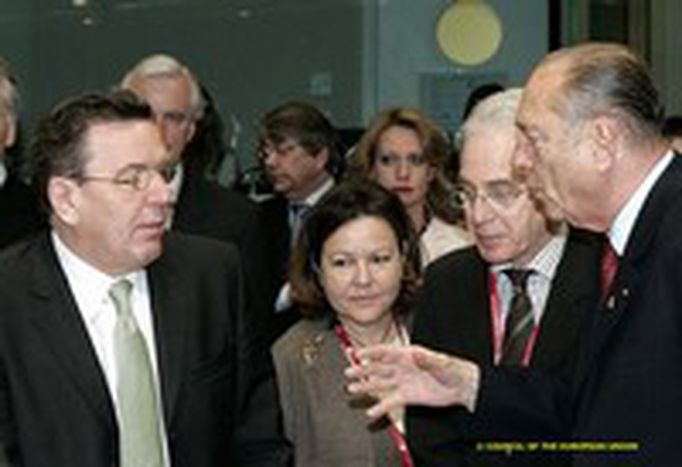 How the Yes vote plummeted

When Jacques Chirac announced that a referendum on the constitution would be held, the potential Yes vote fluctuated between 67 and 69%, only to fall to 45% when it actually came to the referendum. A look at how the Yes vote collapsed over the past year.

14/07/04 - Jacques Chirac, President of the French Republic, announces that he will consult the French people on the constitutional treaty by means of a referendum.

09/09/04 - Ranks split in the Socialist opposition party (PS): Laurent Fabius, the former Finance Minister under the government of Lionel Jospin (1997-2002), threatens to vote No to the treaty establishing a European constitution unless the head of state makes more advances on social welfare. François Hollande, the party Secretary, campaigns for the Yes vote.

01/12/04 - The PS carries out an internal referendum – 60% per cent of the active members declare themselves in favour of the Yes vote, which then becomes the official party line. However, the No camp still remains strong.

15/12/04 - Chirac declares that the constitution and Turkey’s accession to the EU are two separate issues, stating that a referendum on the latter will be held in due course.

02/02/05 - By calling on people to vote No to the European constitution, the national confederal committee, the ‘parliament’ of the CGT (France’s largest trade union organisation), places secretary general Bernard Thibault, who had called for a Yes vote, in the minority. The event highlights the disparity between the grassroots of the trade union and its leaders.

March - Debate on the Bolkestein draft directive (on the liberalisation of European services) grows more intense: for the No camp, the directive symbolises industry relocation and a neo-liberal Europe. During the Brussels summit on 22 March, Chirac gets his European partners to agree to a renegotiation the directive as it is “unacceptable in its current state”.

18/03/05 – Despite the campaign receiving a boost from European leaders, the Yes vote slumps in the polls, going from 65% at the start of January 2005 to 49%. The media steps up coverage of the debate. All of the extreme political parties (the National Front, the Communist party, the Revolutionary Communist League), as well as anti-globalisation movements, such as Attac, are opposed to the constitutional treaty. The major parties (the right-wing UMP and UDF, the PS and the Greens) are officially in favour of the treaty, but internal debate has split the parties.

14/04/05 - President Chirac begins his Yes campaign. During a televised debate, he answers questions from 80 young French people and states that “the constitution will enable Europe to protect itself from ultra-liberal globalisation”. The questions are imprecise, his answers confused and the No camp remains ahead in the polls.

28/04/05 - Lionel Jospin, the former Socialist Prime Minister, attacks the No campaign during a programme on France 2 and asks the French people not to take Europe “hostage” simply because they are dissatisfied with the government over other issues.

The beginning of May: The Jospin effect? Six polling institutes report that the Yes vote is gaining thanks to a swing by PS voters. But the percentage of undecided voters remains close to 30%.

18/05/05 – The Guardian, citing “government sources”, announces that the UK is unlikely to hold its planned referendum on the constitution if France votes No.

13/05/05 - Jacques Delors, the former president of the EU Commission and a respected pro-constitution socialist, mentions a possible plan B in case the treaty is rejected. That really puts the cat among the pigeons of the Yes camp, one of whose main campaign points was that the treaty was impossible to renegotiate.

Mid-May – Delors’ retraction of his statement about a plan B are not enough to stop the No vote retaking the lead in the polls. The battle for the votes of socialists and undecided voters, two groups that are tempted to say No on 29 May to show their discontent with the government, becomes a key issue.

19/05/05 - German Chancellor Gerhard Schröder and Polish President Kwasnieski arrive in Nancy to support Chirac. The French campaigners for the Yes vote, whether right-wing or left-wing, ask if the French President and Prime Minister wouldn’t mind remaining silent. “The more they speak, the more the credibility of the Yes vote suffers”, according to François Rebsamen, the third most senior member of the PS.

20/05/05 – The Netherlands: a poll carried out by the institute NSS-Interview shows that if the Dutch referendum (planned for 1 June) were to take place that week, 63% of the population would vote No to the treaty as opposed to 37% for Yes.

25/05/05 – During a solemn television appearance, Chirac asked the public to disassociate their vote on the constitution from their discontent with the current government, promising to give the country “new impetus”. The French didn’t listen.