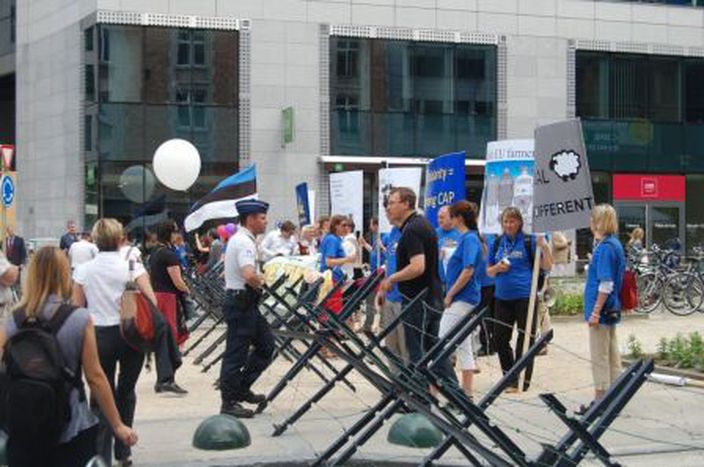 By Séan O'Dubhghaill Pedestrians are being herded away from Schuman roundabout today by police, who have begun to place barriers between the citizenry and their elected representatives meeting in the European Council.

It comes before a two day marathon of discussions on debt interdependence, but also our place within a collection of nation states and demands for more Europe, more (money) and more co-operation. Join the debate and have your voice heard from your side of the barrier.

It’s humid, and you can hear it in the voices congregated at the end of Rue de la Loi. Preparations are being made to steer pedestrians beyond Schuman roundabout by police, who have begun to surreptitiously place barriers between the citizenry and their elected representatives. Attention is drawn again and again to the barriers - and how people are trying to capture the attention of those just beyond it, how people can conduct interviews over it, how people pose for journalists just beyond it - making sure their cause seems further marginalised. 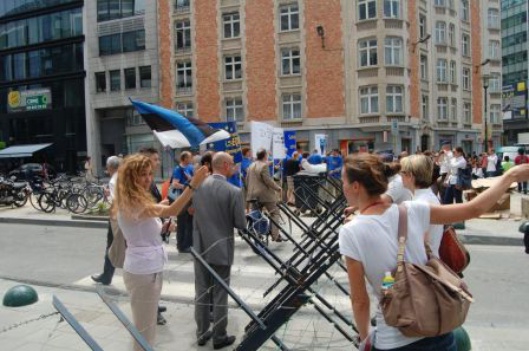 This is the situation as people are stewarded away from the hinterlands of the Council building. The impasse is noticed by everyone as they surgically tear their eyes away from their smartphones and begin making inquiries of their fellow pedestrians about alternate routes and where they are and aren’t allowed to travel. Policemen, protesters and pedestrians alike become crossing guards and traffic wardens to dozens of curious bipeds.

I’m stopped as I am taking a picture and asked a question in a language with which I have only a small amount of fluency - Frenglish- and I do my utmost to gesticulate in the direction of the Schuman train station. I’m delighted to be of service.

Although I’m drawn to the content of the messages being advanced by the protesters, my attention is repeatedly drawn back to the barriers - how people attempt to capture the attention of those just beyond it, how people can conduct interviews over it, how people pose for journalists just beyond it- making sure their cause seems further marginalised. In truth, though, these barriers, simply by breaking up the monotony of unfettered travel around the Schuman area, has gotten people to interact with one another.

For now at least- and even as I write this I can see that critical mass is approaching and more and more barriers have been put up. There are bones to pick from many quarters: a 350 strong group of Turkish-Cypriots are expected today to turn up and ask whether or not they exist, while the Junior European Federalists have been busy writing letters.

Now it appears people are returning to their routine- protesters protest the police police people and the CafeBabel editor is counselling me to get to the council.

As the increasing placement of barriers around access to Rue de le Loi today, a perimeter that is established each time the council of ministers meet, the amount of communication of those beyond the barriers - both protesters and citizens alike- becomes slightly muddied. Let’s hope our representatives can advance a cogent message on their behalf.

That said, I recommend talking a little time today to turn your attentions today to making your voice heard (even in the comments section of this article).

Keep a close eye on CafeBabel Brussels today as we look into the many components involved in debt-interdependence, but remember what lies just beyond that- the place of the European citizen and our place within a collection of nation states who are demanding more Europe, more (money) from Europe and more co-operation in and between European member states and between citizens. Join the debate.