How does the debt-crisis affect European democracy?

Let’s face it: The euro-crisis is the dominant topic at the Dahrendorf Symposium, held today (Wednesday) and tomorrow at the Berlin-Brandenburgische Akademie der Wissenschaften in Berlin. Eventually, almost all panels revolve around monetary issues. And in fact, many other topics are strongly connected to it – for example European democracy. 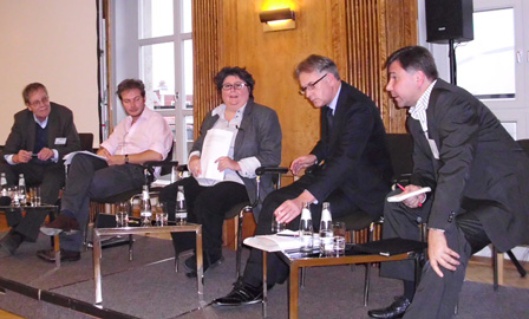 Ivan Krastev from the Centre for Liberal Strategies in Sofia and the International Institute for Security Studies (IISS) recognized a deep democratic asymmetry between debtor- and creditor-countries. He stated that countries like Germany were still able to make autonomous decisions with regard to the euro-crisis. On the other hand, countries like Greece are merely expected to “accept, what was already designed“. This, he believes, is no sustainable solution and it remains doubtful whether “Northern” countries will in the end carry their point.

The underlying reason was not, however, that Greece was expected to take harder cuts than countries could bear, Mr. Krastev explained. Some Balkan-countries even imposed harsher austerity-measures in the last 20 years or so. Instead he presented four alternative causes, to explain why austerity meets resistance in Greece and elsewhere: First, Europe has become more conservative. Young people in Southern European countries don’t go on the streets to demonstrate for a better future. Instead, they claim the right to live like their parents. Second, Europe has become more pessimistic: In 1989 people in the East-European countries depicted the EU as “heaven”; today polls suggest that people in Europe are more pessimistic than anywhere else in the world. Third, the communist legacy paradoxically helped to strengthen competitiveness post-1989, as trade unions didn’t enjoy much support in Eastern Europe. But they are influential in Southern Europe. Finally: Eastern Europeans had a positive picture of EU-institutions in comparison to their national institutions, while today EU-institutions are often seen as evil and national institutions as benevolent.

Most of these assumptions can be challenged, of course. There are many other differences between Eastern Europe 1989 and Southern Europe 2011. The countries in today’s crisis are not only already part of the European Union (Eastern countries were not), they also introduced a common currency (which most Eastern countries still do not use). Southern European countries are democracies and market economies, so no one expects a systemic transformation. At the same time, people are used to speak up loudly, a tradition more unknown in countries under communist dictatorship.

However, protests show that the current approach towards the debtor-countries might very well fail, if measures are not accepted as legitimate. How could democracy thus be strengthened on the European level? Norbert Röttgen, Germany’s Minister for the Environment, came up with an old and still radical vision: The introduction of a European federation. Only by concentrating more powers on a European level, he claimed, could Europe win back lost power. These powers were needed to decide how we want to live and to reclaim lost ground from the economic and financial sector. They were also needed to make decisions more legitimate and acceptable. People, he said, should elect directly the President of the European Commission, who should also guide European politics. Council and Parliament should become a federal two-chamber parliamentary system. National elections should be coordinated.

In the eyes of many, these ideas might go too far. If they are feasible remains doubtful at best. And many questions are still open: What if, for example, a European parliament would approve by a vast majority measures to be implemented in Greece but rejected by the Greek? Shouldn’t countries concerned enjoy veto-rights? While open questions remain, a debate on legitimacy and democracy on the European level is urgently needed in today’s more complicated European world.