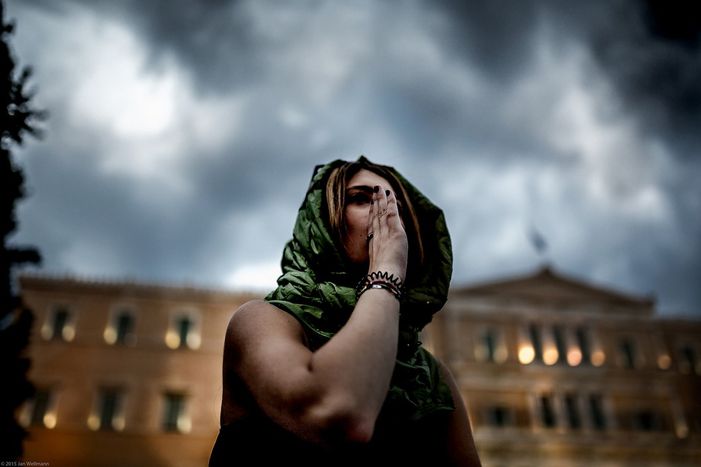 How do young Europeans feel about austerity and Greece?

It’s pretty safe to say that everyone is bored of the simplistic Greek vs German narrative that has dominated coverage of the recently agreed third bailout. There are other creditors apart from Germany and other nations who have had to suffer austerity. So we asked citizens from elsewhere in Europe a simple question for a complicated problem: Do you think the outcome of the Greek issue is fair?

“I think it is difficult to talk about "fair" from either side of these negotiations- since it seems pretty clear that everyone involved has made mistakes (Greece in faking numbers, EU in pretending they didn’t know, the old Greek government in not fulfilling their duties, the new Greek government in promising unrealistic things to their voters, the Eurogroup in bullying Greece...). I certainly don’t buy into the #ThisIsACoup narrative, although I can understand why this is attractive to some people, especially on the far left. But I also have a big problem with the kind of stern ultimatum that Schäuble expressed about taking "time out", which effectively shuts Greece out from the Eurozone.”

“For me, these are symptoms of a system that is doomed to fail, a monetary union without a political union poses these kind of problems in the long run… I'm not saying that I'm in favour for a single political union, nor for a Grexit (more because of the symbolic impact and the risks related to that) but in a world without this monetary union, Greece could have devalued their own currency to attract investments and money flows to their country. On top of that, I think austerity measures are temporary solutions that create the illusion of financial solvency, but cover up the fact that governments have systematically created new bubbles within the financial system trough quantitative easing and bail outs; on a larger scale it will recreate a financial crisis bigger than 2007/2008.”

”Many Swedes are flabbergasted over the severity of the Greek crisis. In comparison, the latest emergency loan package to is nearly as big as the Swedish government’s total expenditures this year. Most people in Sweden tend to align with the German view towards Greece, but there is vocal minority supporting the Tsipras government. Personally, I think that the latest compromise only delays that fact that Greece is going to default.”

“This is a tough one. I think we are at the stage when any deal will be seen unfair either by the Greeks or the creditors. I am afraid there are no good solutions, only various levels of bad solutions. As for the deal that Tsipras accepted, it's too complex to assess it is either fair or unfair. Some of the conditions seem to be acceptable, some are questionable but we would need a dissertation to go into more detail. The Greek drama will continue, so this agreement may not be the last one. The worst outcome will be that the whole EU will emerge weakened out of this mess. Old animosities and stereotypes have been revived, the whole issue has become too emotional and I don't think it will get better any time soon.”

“I was in Greece at the moment of the referendum. Their view on the Germans is in fact very harsh. For me as a Northern European I am having a real hard time to accept this, as I understand the rigid and structured way of thinking and I don't think that Greece has been that fair.

“I believe that the accord that they have made is fair in the sense that the Greek economy needs to be boosted. With an austerity plan as strict as the one Merkel suggested, the country will be really lost and it cannot get out of the crises due to the high interest they have to pay on the debts. However, I do share the view that we cannot trust Greece anymore and that much money has been paid for them and that they have not managed to get their politics to work.

“But I am not for a Grexit and I think that there should be much more of a common viewpoint. Right now, the Greeks accuse the Germans on having taking profit of their country by exporting many products and the Germans accuse the Greeks for not paying anything back.”

“Unfortunately, for a just estimation of the situation I lack the socio-economic knowledge. In my opinion, however, a country that belongs to a certain group should profit from the resulting advantages, but should also bear the disadvantages. At the same time it has to take care of its citizens. In the case of Greece, the reforms that are more or less pulled through forcefully right now, could have been implemented in a milder manner much earlier. If it is fair or unfair, is difficult to say for me. But since I can’t identify a more “fair” solution for Greece in its present condition, I think, the reforms are right, at least for the upcoming period of time. I find Latvia a fitting example.”

“I'm pretty skeptical about the Greek deal to be honest. It's just a stop-gap measure, which seems to go against what the Greek people voted for in the referendum. The more I hear about the crisis, the more I think the Eurozone is trying to punish Greece rather than help it. Here in Australia, there's a saying "the Australian public care more about the Greek economy than the Greeks do" and what people here see is a failing Europe lashing out against normal people. It doesn't exactly make you want to go back!

“No, it is not fair, but this issue is much more complex than to reduce it to a question of fairness, whatever we understand by it. Greece still has a lot of reforms that it needs to do and that other southern countries have already done. I applaud the Greek people for fighting back the EU but it seems like as much as you want you can’t change the rules of the game. And then there is a question of morality in all of this mess. Why does the IMF profit on other countries’ debt? It’s made over eight billion euros from loans recently.”

“The Finnish government traditionally follows Germany in the EU, and the same applies for the Greece situation too. For me it appears the Finnish media is presenting the Greek view somewhat widely; there has been a lot of interviews with Greek people lately: entrepreneurs, students, workers, too. When it comes to fairness, there are two viewpoints. On the other hand, Greece lied to get the loans, and it should pay them.

"The original actors to blame are the Greek politicians. On the other hand the Troika created the rules of the economy game and let Greece in – and now its demands are making the Greek people to suffer. This is the fairness problem: it’s not fair the Greek people will suffer. Leaning on professionals interviewed lately I’d say that the timetable is not fair. The EU should not demand so much so fast.”

“Giving a third bailout to Greece, in my opinion, might lead the EU into a more difficult situation. If Greek society will oppose to the measures of saving that were offered, the EU risks wasting money.  From one side, the EU must show their strength to the other countries that it can save this troubled member state. However this situation might create the perverse habit that other countries, which also have economic issues, could take less responsibility, expecting that the European Financial Stability Mechanism will be always open. So, if the EU decides to give a hand for the third time, it also has to be strict, if Greece acts irresponsible.”

No, I don't think it is at all Germany against Greece, and while I'm not sure of the details of the bailout agreement, I believe that it is the best that can be offered. I also think that the whole of Europe wanted this situation to end well, and to make reasonable demands of Greece. While I certainly feel sympathy for "regular" Greeks who will have to suffer and probably have lower living standards in the future,  it is obvious that their governments were spending money that wasn't theirs and knowingly allowed too low taxes and tax evasion. Also, according to Croatian newspapers, the average pension in Greece is 1000 euros - which is way more than the average Croatian salary (and the pension, which is less than 300 euros), so they are not that poor, really.