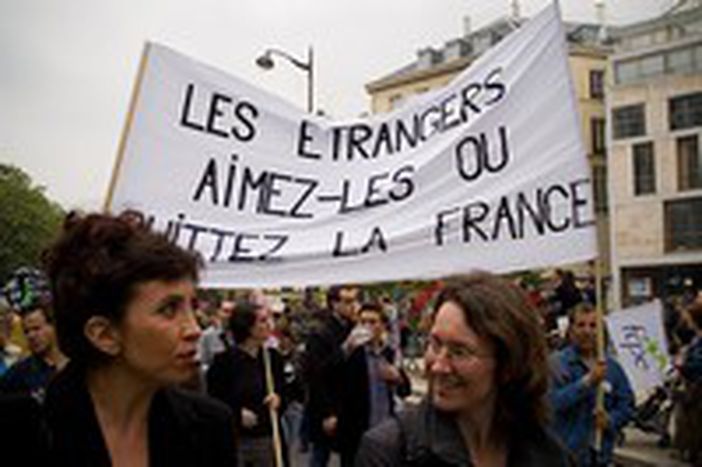 How about going back to your country

The May 2007 creation of a French ministry of immigration and national identity led by Brice Hortefeux ponders paying immigrants to go back to where they came from. Multiculturalism – a European asset?

The most recent EU report on Migration and Asylum in Europe (2003), has it that 11.75% of the world's immigrant population - asylum-seekers, refugees and everyone else who seeks a better life - have come knocking at Europe's door. With the fairly recent transfer of responsibility for policies regulating the influx and civic integration of incoming populations from member states to European institutions, how can the EU make the approximately 25 million non-EU nationals residing within its borders feel at home?

With their sizeable immigrant populations, countries like Belgium, Germany, Italy, Netherlands, Spain and Austria frequently deal with tensions resulting from the challenges of integration. And after the 2005 terrorist attacks in the UK, immigration has come to mean a threat to a country's security and stability. The 7 July bombings exposed that even in a country proud of its successes with integrating citizens, 25% of Muslims in Britain sympathised with the bombers' motives.

The British model was once lauded for being the most effective means of integration. It stems from a desire to create a multicultural mosaic of a country. Cultural and religious groups have the right to both retain their heritage whilst participate in the civic, social and economic life of their new host nation. But the cultural assimilation of culturally distinct individuals is a voluntary decision.

Despite its advantages, the British model is by no means ideal. Critics like British journalist Martin Wolf show that multiculturalism is 'dangerous because it destroys political community. It is demeaning because it devalues citizenship.' Neither does it sufficiently encourage the sense of togetherness, nor sufficiently emphasise a sense of a common national identity.

In a country where seven million people have non-European ancestry – and five million of which are of Muslim descent - national identity has come to the core of the French model of republican integration. Unlike the UK, immigrants coming to France are more strictly required to adapt their culture to the fundamental values of the fifth republic - liberté, égalité, fraternité.

However, they are rarely ready to reject a part of their personal identity comprised of their religion, customs and values, as shown by the heated debate about the headscarf ban in February 2004. Strong educational qualifications and speaking French proficiently also don't stop the risk of socio-economic exclusion alone. French riots continue to frequently break out in the poorer suburbs of major French cities, inhabited mainly by populations of immigrant descent. The primary causal factor of the autumn 2005 riots in France was presented by all major news sources as being the degrading socio-economic conditions of these populations residing in these troubled poor districts. And let's not forget of a poorly documented racial discrimination.

It's a paradox to see immigration and the resulting multiculturalism as a threat. Europe's persisting negative growth rate highlights a desperate need for immigrant populations to stabilise economy and the pension system. A 2000 United Nations report projected that Europe may fall into a labour deficit unless 35 million adult immigrants come to the continent by the year 2025. Meanwhile xenophobia is fuelled by factors such as the fear of the unskilled immigrant, who could steal the jobs usually done by Europeans. Often though, immigrants take on jobs that Europeans do not want, or set up their own businesses that add value to national economies. Finally, cultural diversity should be presented as a solid base of a country's creative force.

The Dublin Convention already set the principles of a European agenda for common European refugee protection and asylum policy back in 1990. But for now, even the European Commission agrees that it even has problems in accumulating data to understand the trends in migration. They understand the extent of the problem - as all data is compiled from national institutions and statistical offices, each of which uses a different data-gathering method – all that's left is to manage the complex migration policies on the European level.