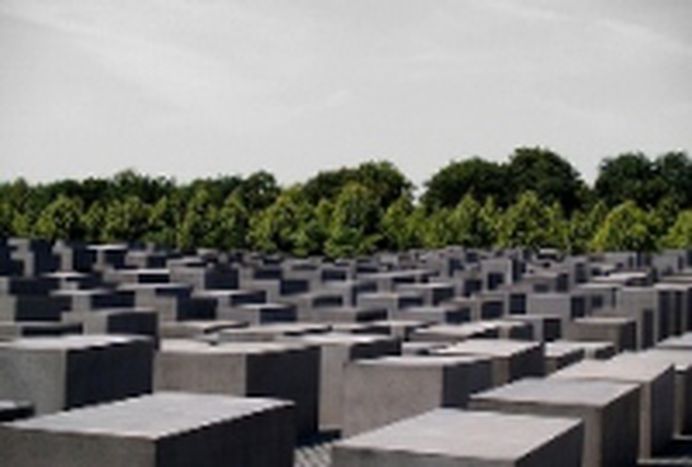 Holocaust memorials: building on the past

How do you go about remembering a crime as unspeakable as that of the Nazi Holocaust? 60 years later, Germany is still wrestling with the question

Few city skylines can compete with that of Berlin. Skyscrapers there may be not, but stare out from the glass dome atop the city’s Reichstag and defining symbols of the twentieth century compete for your attention. Here, you’ll see the remnants of the wall that divided this city and Europe, the Fernsehturm and other architectural relics of the GDR. Look carefully, however, and you’ll find a new monument to Germany’s past, a monument constructed to commemorate the darkest and most destructive hour in this country’s history. Just south of the Brandenburg Gate, nestled between the foundations of the new US Embassy and the massive redevelopment of the Potsdamerplatz, Germany’s Memorial to the Murdered Jews of Europe sits like an enormous concrete graveyard in the heart of the nation’s capital. Designed by the American architect, Peter Eisenmann, and unveiled in 2004 at a cost of over €20 million, the memorial’s 2,771 concrete stelae represent Germany’s first state monument to the victims of the Nazi Holocaust.

Whether a crime of such scale and sheer brutality as the Holocaust can and should be represented architecturally is a question to which there is obviously no right answer. Theodor Adorno once famously commented that after Auschwitz, even writing a poem was a barbaric act and certainly many consider any architectural effort at commemorating the murder of so many millions to be at worst futile, at best fraught with complexity. After all, is such a memorial about coming to terms with one’s own past or rather seeking redemption from it? Who is the memorial really for: the victims or the descendants of the perpetrators? And besides, surely Dachau or Sachsenhausen are more authentic memorials ? Others, however, argue that the best way to ensure the past is not forgotten is to build lasting monuments to it. While representing the Holocaust is invariably a subjective act, they consider that it is the process rather than the result that is of greatest significance.

Certainly there is no lack of physical memorials to the Holocaust, with Israel’s Yad Vashem clearly the most famous. And yet Germany’s is unique, in style as in tone, for while there is no apparent symbolism to Eisenmann’s design, it is an open admission of a nation’s guilt; a memorial to and a reminder of a country’s darkest hour, rather than its finest. In this sense, as Lea Rosh, the journalist who proposed the idea in the first place, has suggested, the memorial is not for the Jews at all: it is for the Germans themselves. And this, more than anything, is why it was 60 years in forthcoming.

In the immediate post-war period, Germany’s leaders were keen to draw a line under the atrocities of the Nazi era and worried more about rebuilding the nation’s economy than about tackling the ghosts of their recent past. But if the riots of 1968 were about anything, it was the reluctance – or downright refusal – of a generation of Germans to wash their dirty laundry in public. Adenauer was not alone in hoping that the Nuremberg Trials had put the issue to rest: even Helmut Kohl appeared to express a greater desire to commemorate all war victims than he did specifically those of the Nazi genocide.

So what changed? Some would suggest not much. The debate surrounding the involvement in the Holocaust of the chemical company Degussa, a subsidiary of which had manufactured the gas used at Auschwitz, again showed how the past continued to define the present. But the reunification in the early 1990s and the generational shift in German politics and society encouraged the country to publicly confront the horrors of its past without seeking to erase, forget or atone for them.

Learning from the past

Eisenmann’s memorial is symbolic of this change. Its sheer size stands in clear contrast to previous low-key memorials such as the small, bronze plaques which sit silently outside the houses of deported Jews in cities like Hamburg. But while the rights and wrongs of the memorial’s scale continue to be debated, the process it unleashed has arguably forced many to reconsider Germany’s greater engagement with its past and has renewed the debate about its future. Given the collective amnesia that continues to prevail in much of Europe with regard to the Holocaust, this is surely to be saluted.

Just as importantly, perhaps, the memorial is one of only several recent projects serving to ensure that Germany learns from and confronts its past rather than quietly forgets it. Across town in West Berlin, Daniel Libeskind’s Jewish Museum, opened to much acclaim in 2001, is a stunning architectural monument to the scarring of the Jewish nation as well as to the cultural void left in Germany in the Holocaust’s wake. By contrast, Munich’s new main synagogue, to be unveiled this month, 68 years to the day after its predecessor was destroyed during the Kristallnacht pogrom of 1938, attempts to positively address this void. And the rebuilt place of worship will also house a Jewish cultural centre and restaurant. All three projects are essentially different responses to the same question and are highly visible manifestations of Germany’s special responsibility to its Jewish community. As to which of them best integrates the lessons of the past into a positive vision for the future, only the public will decide. But as the glass dome atop the renovated Reichstag itself testifies, the best way to deal with one’s history is to build upon it, not build over it.