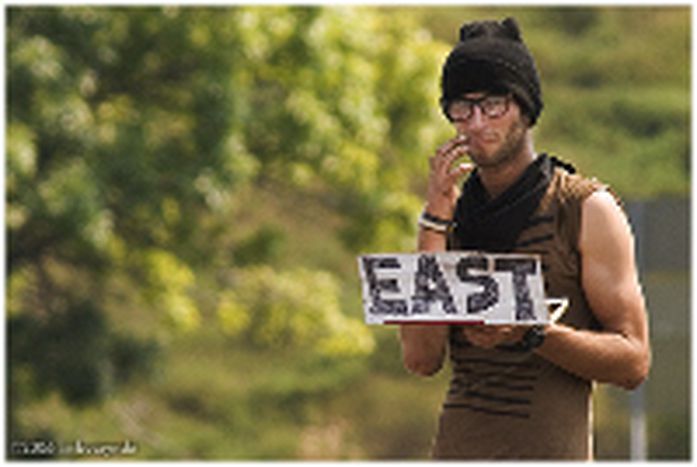 “Unfortunately, 88% of all Europeans have never heard of the Millennium Development Goals (MDGs),” says Vincent, one of the French hitchhikers, pointing at a survey of the European Union. “That’s why our action matters!” says the enthusiastic participant of Eurizons.

The trials and tribulations of the project

On August 23, the hitchhikers left Riga in Latvia and travel through six old and new European member states before arriving at the European Parliament in Strasbourg on September 8. Young people from Latvia, Poland, Czech Republic, Slovakia, Hungary, Germany and France participate in this transnational trip.

Johannes Krause, the coordinator of the Global Education Network of Young Europeans, for the German NGO ASA

, recalls that “young European activists decided to organise Eurizons at a training seminar on development education in the Czech Republic in 2005. We created the name, concept and route later in Berlin”. Since then the coordination team and the hitchhikers have developed strategies such as innovative flashmobs and street theatre to attract the attention of the European public. .

The Eurizons campaign (www.eurizons.net) aims at raising awareness among European citizens, encouraging the discussion of global development issues and promoting active citizenship. The hitchhikers can meet the European public along the way. Further, in the eight cities where the tour stops, events, workshops and concerts are organized by Eurizons hitchhikers and their local GLEN partner organisation to reach even more people. In addition, over 5,000 postcards and 10,000 leaflets have been printed in nine European languages. The written information is very useful when crossing so many different countries to overcome language barriers. Street performances on main squares and in parks have been successful in attracting pedestrians.

Contributing to the Millennium development programme

The eight different Millennium development goals were designed by the United Nations in 2000 to reduce poverty worldwide by 2015. The UN wants to halve extreme poverty and achieve universal primary education, gender equality and improve health conditions. MDGs Focus on environmental sustainability and on the importance of building a global partnership between rich and poor countries.

A better insight of the countries of their fellow travellers, a time for discussion, a grasp of the political social and economic situation of European countries… These are a few of the advantages offered by the Eurizons project. For Kasha, a politics student and member of the Polish Eurizons team, “ Polish people are just starting to get more interested in the problems of other countries. Because of the history of politics in Poland, people have a different outlook on global issues though their attitude is starting to change”. She concludes “ the campaign will have a invaluable impact on young Polish people”. All hitchhikers want to understand global issues and encourage a better understanding of each other's countries and cultures. Jovanka, 25, from Switzerland, is one of the four hitchhikers whose country is not included in the route, nevertheless she has been very keen on participating. She says that she regrets that the tour does not pass through Switzerland but claims that she is participating in order to “integrate Switzerland in an EU project”.

The tour ends with a visit to the European Parliament in Strasbourg. Along the way hitchhikers will collect messages for the Members of the European Parliament. Neringa Gudisauskaite, 20, a Eurizons spectator in Kaunas, Lithuania, said she is convinced that young Lithuanians “are more European than their parents.” Vijole Arbas, a fellow Lithuanian, is sick of politics: “Tell those people in the EU parliament to stay out of our lives, they are far too bureaucratic!” The hitchhikers will gather all these views and discuss them at a meeting with 25 MEPs on September 8. The most important conclusions of the Eurizons campaign will be included in an open letter presented to the European parliament.